The homemade bombs known as IEDs accounted for 60 percent of all U.S. military injuries in Iraq and have killed... 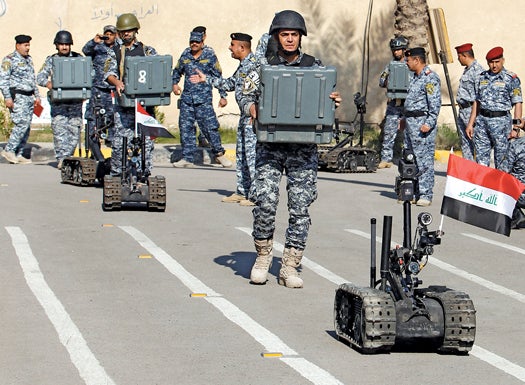 The homemade bombs known as IEDs accounted for 60 percent of all U.S. military injuries in Iraq and have killed more than 21,000 Iraqi civilians. Last November, a month before the last U.S. troops departed, Iraq’s federal bomb squad paraded with bomb-disposal robots in Baghdad. QinetiQ North America has sold 16 of the $100,000 remote-controlled Talons to the Iraqi police.

An operator anywhere within 2,500 feet of the robot directs its four cameras to locate IEDs and its gripper arm to dismantle them. Talons can be blown up and repaired about a dozen times before being decommissioned, says Ed Godere, QinetiQ North America’s senior vice president of unmanned systems. One was even driven out of a river after being blasted off a bridge.