Billionaires: Russian Mogul Wants to Upload Your Brains Into Immortality

Earlier this year, a Russian media mogul named Dmitry Itskov formally announced his intention to disembody our conscious minds and... 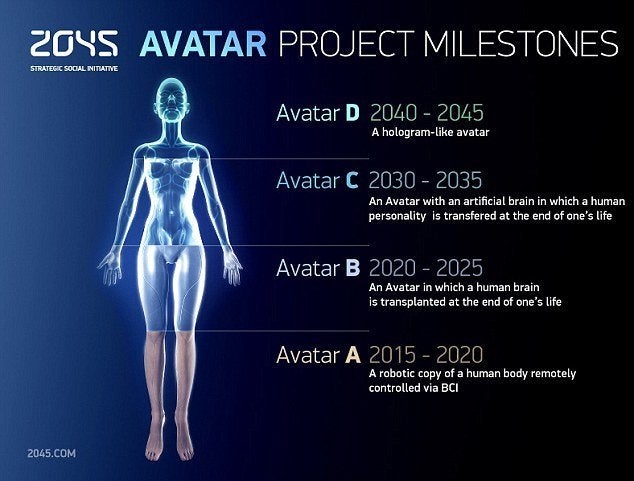 Earlier this year, a Russian media mogul named Dmitry Itskov formally announced his intention to disembody our conscious minds and upload them to a hologram–an avatar–by 2045. In other words he outlined a plan to achieve immortality, removing the human mind from the physical constraints presented by the biological human body. He was serious. And now, in a letter to the members of the Forbes World’s Billionaire’s List, he’s offering up that immortality to the world’s 1,266 richest people.

“Many of you who have accumulated great wealth by making success of your businesses are supporting science, the arts and charities. I urge you to take note of the vital importance of funding scientific development in the field of cybernetic immortality and the artificial body,” Itskov wrote in the letter. “Such research has the potential to free you, as well as the majority of all people on our planet, from disease, old age and even death.”

The 2045 Initiative claims to have hired 30 scientists to help it pursue its immortality goal. It is opening a San Francisco office this summer and launching a major social media effort to get scientists talking about cybernetic technologies. It’s hosting another Global Future Congress next year in New York City (the last one was in Moscow earlier this year). In other words, as crazy as this sounds Itskov is dead serious and the wheels are turning on this project.

The idea, as you can see above, is to incrementally move the human mind into more disembodied and–no better way to say it–futuristic vehicles: first a humanoid robot controlled entirely by a human brain via brain-machine interface, then a conscious human brain transplanted into a humanoid robot, then consciousness uploaded (sans biological gray matter) to a computer, and finally a hologram that contains a full conscious human mind.

Somehow. It seems far-fetched, but while that timeline seems ambitious we’re the last people that are going to say something is technologically impossible. If Itskov can rally the world’s richest to pay for the R&D, who knows what cool technology they might come up with–even the unintentional discoveries along the way could be mind blowing, even if offering immortality to the world’s richest people sounds something like the nefarious plot underpinning a comic book series. At least he’s asking them to invest in scientific achievement rather than investing in another billion.

“Currently you invest in business projects that will bring you yet another billion,” Itskov writes. “You also have the ability to finance the extension of your own life up to immortality. Our civilization has come very close to the creation of such technologies: it’s not a science fiction fantasy. It is in your power to make sure that this goal will be achieved in your lifetime.”