From LaserMotive, the winner of NASA's Space Elevator competition 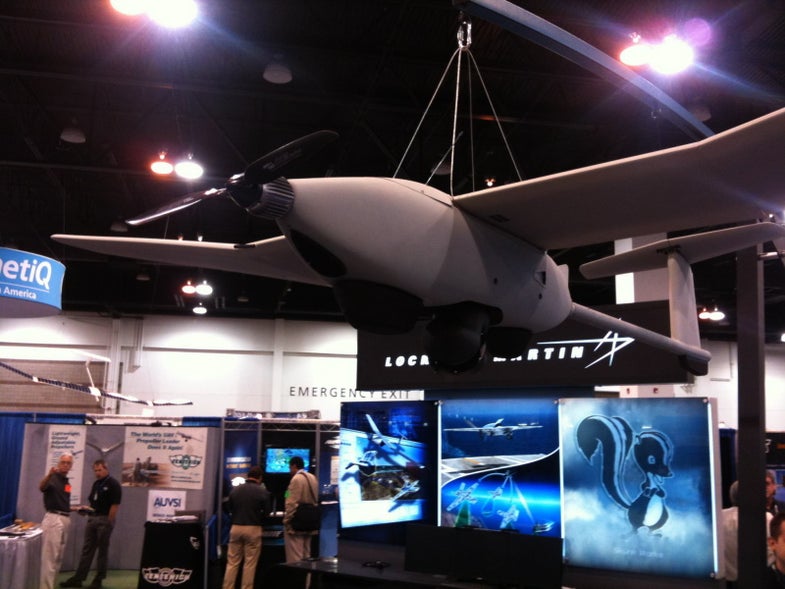 Lockheed Martin's Stalker UAV gets a new feature that takes advantage of its whisper-quiet "hush drive" propulsion: The shot-stalker, which can identify and locate gunfire and explosives within its surveillance domain. Eric Hagerman
SHARE

Midair refueling of manned aircraft currently calls for the dispatching of a huge tanker plane and a delicate midair link-up between two moving aircraft. The unmanned aerial vehicles of the future may have a much easier time staying aloft for days at a time–indefinitely, really–via laser refueling systems that beam energy from the ground to aircraft on the wing. Lockheed Martin’s Stalker Unmanned Aerial System recently demonstrated the potential of these emerging laser power systems by maintaining continuous operation for 48 straight hours.

To be fair, this wasn’t a flight test. Lockheed’s Stalker was modified for indoor flight and placed in a wind tunnel under flight conditions, so the laser system didn’t have to track the moving aircraft in flight. But the outcome was extremely promising nonetheless. Under conditions akin to continuous flight, this new laser light power system created by LaserMotive Inc. delivered a constant flow of power to the Stalker, keeping it humming for far longer than even the test parameters required. The test team only terminated the trial because the Stalker and the power system had already far exceeded the endurance goals they had set out to meet.

Moreover, the Stalker’s battery ended the session with more power stored than when it began the test, suggesting that even under more stressful flight conditions that drain a bit more power from the Stalker–bad weather, perhaps–the system is capable of delivering plenty of energy to keep a craft airborne. That’s good news for the Special Ops forces who use the drone for persistent surveillance and recon.

It’s also news (you’ll have to decide whether good or bad) for the civilian/commercial drone space. Drones aircraft are coming to domestic airspace in the U.S., and while privacy concerns abound, one of the arguments drone proponents often go to is the fact that most unmanned aerial systems that might be deployed by law enforcement or other agencies of state have short flight durations. That is, they can’t really be used for persistent surveillance, only for very short periods and for very specific tasks, like search and rescue or well-defined surveillance missions. Tell that to LaserMotive.