According to Jaunted, the TSA has begun rolling out a new style of body scanner to select airports that will... 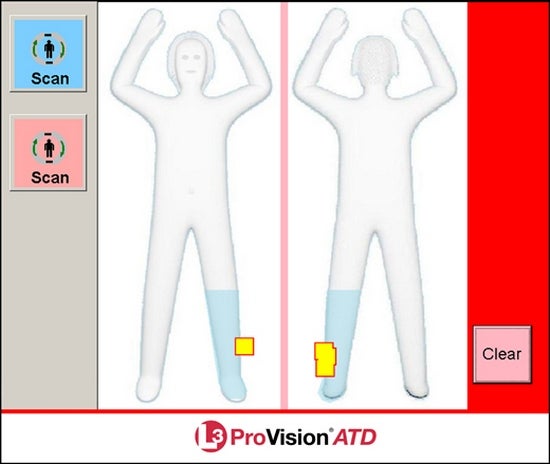 According to Jaunted, the TSA has begun rolling out a new style of body scanner to select airports that will hopefully have the effect of maintaining security while reducing the “random TSA agents in some dark room are seeing me naked” problem the current scanners struggle with. These new scanners are sometimes referred to as “gingerbread man” scanners: They project any forbidden objects onto a genital-less drawing of a person, rather than showing a traveller’s actual body.

These scanners aren’t new; they’ve been used elsewhere in the world at airports like Amsterdam’s Schiphol for years, and we’ve seen similar ideas before. It shows only a featureless body shape (which looks sort of like a gingerbread man), and if it finds any forbidden objects during the scan, it projects them onto the corresponding location on the gingerbread drawing as yellow “hot spots.” Then the offender is hustled out for the regular invasive body scan. Nobody said this new system was perfect, but it does reduce the number of invasive scans: if you’re clean and the scanner realizes it on the first try, your body will remain unseen by humorless TSA types.

The new scanners are rolling out to 40 domestic airports at first, for a total of about 240 machines at a cost of $2.7 million. We’re not sure exactly which airports are getting the scanners, though the Baltimore-Washington and Tampa airports seem a lock.