Video: Touch-Sensitive Doorknobs Could Lock or Unlock With the Curl of a Finger

Researchers from Carnegie Mellon University and Disney Research, which is the lab arm of the Disney Company that focuses on... 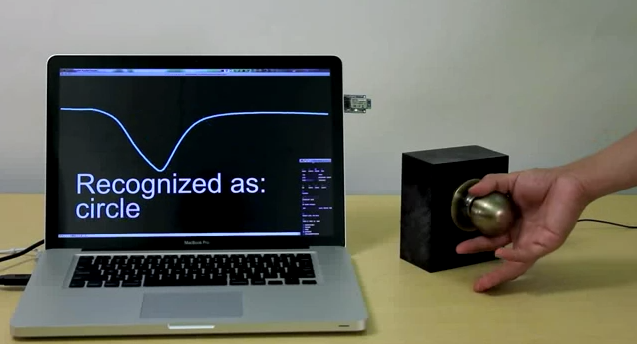 Researchers from Carnegie Mellon University and Disney Research, which is the lab arm of the Disney Company that focuses on computer animation and interactivity, among other things, have worked out a new version of capacitive sensors–the same sensors used in modern smartphones and tablets. This version is able to detect touch in much more detail, like identifying which finger you’ve used to tap it.

The project is called Touché, and it differs from regular capacitive touch in that it can sense electrical signals “across a broad range of frequencies.” (Typical capacitive sensors can only detect one.) It’s also apparently easy to implement sensors onto all kinds of items, including doorknobs, water, and, well, people, without having to stick a layer of sensors on top, like you have to with regular capacitive touchscreens. The team used the example of a person wearing a sensor wristband, able to detect gestures and relay them to smartphones.

A better example might be the doorknob. If outfitted with these sensors, you could communicate all kinds of commands by touching the knob in different ways–using your pinkie and index finger, for example, might mean “unlock.” (An older sensor would only be able to interpret that command as “two points of entry,” rather than identifying the individual fingers.)

We do wonder what it would make of the capacitive nose extender, though.