A Florida funeral home has debuted a new alternative to cremation, known as the Resomator, that uses heated alkaline water... 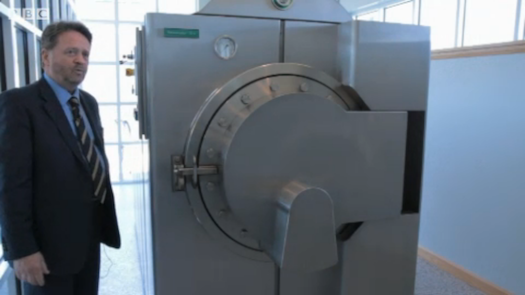 A Florida funeral home has debuted a new alternative to cremation, known as the Resomator, that uses heated alkaline water to dissolve bodies in about three hours. Why do we need an alternative to cremation in the first place? Turns out cremation devices use lots of energy, release a fair amount of carbon emissions, and, in the U.K., are responsible for 16% of mercury emissions.

Created by a Glaswegian company, the Resomator submerges bodies in a potassium hydroxide solution in its steel chamber, then pressurizes (to about ten atmospheres) and heats (to over 350 degrees F) the solution for about three hours. After that, the resulting liquid is simply poured into the regular sewage system–it apparently poses no environmental risk and has passed Florida’s undoubtedly strict laws for this sort of bio-disposal. Bones remain and are pulverized to ash in the usual way, and any metal bits (including mercury and any prostheses) are retained to be disposed of or recycled in a more responsible way.

Florida is just one of seven states that has legalized the Resomator, but it may catch on in others. The president of Resomation Ltd, the company behind the device, says it emits a third less greenhouse gas and uses a mere seventh of the energy of a cremation device, let alone the benefits of safe extraction of mercury and other metals. The company seems hopeful that its macabre but useful creation will soon receive approval in its native U.K..