The high profile courtroom drama unfolding around Casey Anthony–the Florida mother accused of murdering her two-year-old daughter Caylee in 2008–has... 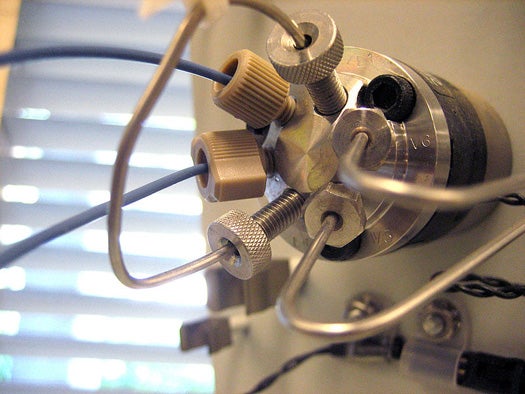 The high profile courtroom drama unfolding around Casey Anthony–the Florida mother accused of murdering her two-year-old daughter Caylee in 2008–has not been short on conflicts and legal confrontation. But one controversial aspect is stemming from an unexpected source: a can of air.

A novel and untested forensics technique that promises to sniff out the traces of decomposition on the air has been thrust into the spotlight during the trial, forcing the Oak Ridge National Labs researcher who developed it to defend his methods. It involves trapping air–in this case, air from Casey Anthony’s car–in a can for later extraction in a laboratory, where it is put through tests for the telltale signs of human composition.

The smell of Anthony’s car has been central to the case against her, as various people who came in contact with the car in the days following Caylee’s disappearance said it smelled like death. The challenge for prosecutors is proving that a foul smell–a smell that defense attorneys say came from a garbage bag left in the trunk–is actually the lingering odor of human decomposition.

To do so they brought in ORNL senior researcher Arpad Vass, whose work in odor detection had been used to hunt cadavers before. Vass and a colleague were given a sealed can containing a scrap of upholstery from the car, and using a syringe extracted some of the air inside.

They then ran it through a gas chromatography/mass spectrometry device to analyze it for substances, and cross referenced those results against a database of more than 400 chemical traces of decomposition that Vass has compiled. According to Vass, the air contained an “overwhelmingly strong” scent of decomposition.

The problem–and this tends to be a recurring problem with forensic techniques that have never been used in court before–is that this technique has never been used in court before. Other scientists have called it too experimental and the defense tried to block it from the courtroom. Given the fact that Anthony faces the death penalty, the stakes are certainly high. But the judge has left this controversial piece of evidence in the jury’s hands; they are free to believe Vass or to be skeptical of the science.

We haven’t seen the science up close, so it’s difficult to make a judgment call. But if Anthony is convicted, it could set a kind of precedent, and this kind of science lab sniff test could become regular tool in both the investigation and prosecution of crimes. All investigators would need is a can full of air.