As Shuttle Program Winds Down, Astronauts Weigh A Future With No Spaceship To Fly

No 'mass exodus,' but hard choices ahead for U.S. astronaut corps 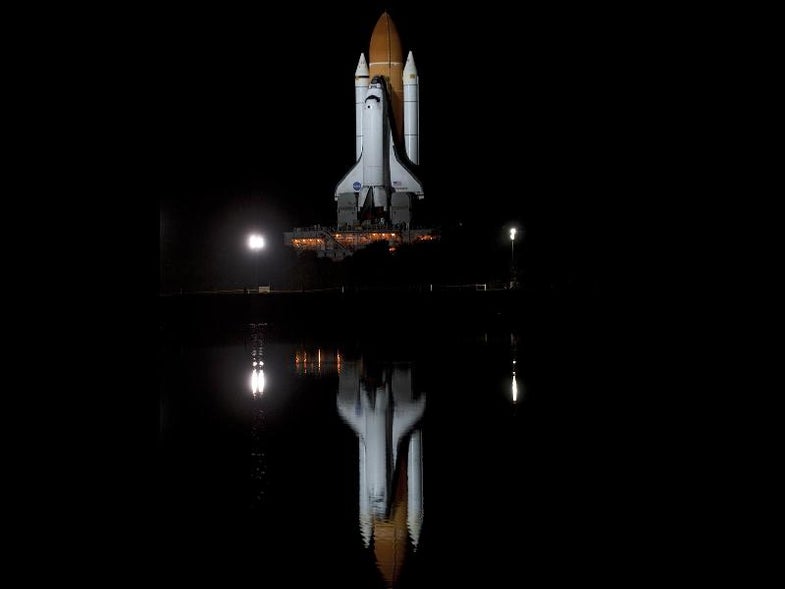 Discovery sits on the launch pad ahead of of its 39th and final voyage to space. NASA
SHARE

Instructed by his father, 9-year-old Jose Hernandez marched up to the family television set to wriggle the rabbit-ears antenna, hoping to sharpen the black-and-white image of American men walking on the moon. It was December 1972, during Apollo 17, and Hernandez was transfixed.

“I would go outside, look at the moon, and come back inside and look at the images on TV. I remember being all of 9 years old and telling my parents, ‘That’s what I want to do when I grow up,'” he recalled. And he did it. He became an engineer and applied to be an astronaut 12 times before he finally made the cut in 2004. Then he made just one trip to space before hanging up his flight suit for good last month.

It wasn’t because he’d realized his dream and moved on. It was because there was nothing in this country for him to fly.

Hernandez could have stayed in the astronaut corps and trained to fly on the International Space Station, but the commitment was just too much. The post-shuttle astronaut training regimen involves six-week jaunts to Japan, Canada, Russia and Europe over two and a half years, and then a six-month stay on the ISS. Hernandez chose to stay in Houston with his wife and five kids.

“I had to make a decision, so I chose for the sake of the family to leave NASA,” he said. He said people might have asked why a father of five became an astronaut in the first place, given the arduous training and long absences.

“My answer would be, I didn’t expect to be called to Russia,” he said.

Including Hernandez, five veteran astronauts have left NASA since August 2010. Linda Godwin and Scott Altman were the first of the wave, departing in August. Godwin retired and Altman went to work for a firm called ASRC Research and Technology. In December, Alan Poindexter left the agency to return to the Naval Postgraduate School in Monterey, Calif., where he will serve as dean of students. And Jan. 3, Marsha Ivins retired.

As NASA prepares for space shuttle Discovery’s 39th and final flight today — with just two more shuttle flights left — current and former astronauts wonder whether more of their colleagues will move on, with no prospects of an American spacecraft for many years.

When Leroy Chiao was selected in 1990, leaving the space agency was the last thing he imagined, he said. He attended a retirement party during his first week of astronaut training and couldn’t fathom why anyone would walk away. He was 8 when he watched Neil Armstrong step onto the lunar surface, and like Hernandez, he dreamt of becoming an astronaut. But 15 years later, things changed.

Chiao flew on three shuttle missions and once on a Russian Soyuz, after which he commanded the International Space Station for six and a half months. When he got home, he realized he was done.

“Especially after having flown and lived on the ISS, it was kind of like eating a big meal. I was full. It was great, I had a wonderful experience, but it was like, ‘You know what, it’s time to go do something else,'” he said. He left NASA in December 2005. Leroy on the ISS

Both Chiao and Hernandez added that they wanted other astronauts to have a chance to fly.

“I didn’t feel bad that I was leaving (NASA) in dire straits. I think we have enough astronauts and not enough slots for them to fly,” Hernandez said. “In a way I think I’m doing them a favor in alleviating the numbers, and I get to enjoy my family.”

Hernandez’s class was the last astronaut group that applied with the expectation of flying at least one shuttle mission before the program ended. But the candidates were still asked about their post-shuttle ambitions during the interview process, he recalled.

“We got a call asking would we still be interested in being astronauts if the shuttle program got canceled. In 2004, I said yes, I’m still interested. If I had to train for a station flight, I’m more than willing to do that. But 7 years later, circumstances change,” he said.

The class of 2009 was the first group to be chosen without a dedicated spacecraft for them to fly. When the candidates were announced, the Constellation program was slated to begin in 2015, meaning there would be a five-year gap between the shuttle’s retirement and the debut of its replacement. Now it’s even longer than that, with Constellation relegated to the dustbin and the future of American spaceflight resting on the shoulders of the private sector.

Before he announced the new candidates, Johnson Space Center Director Michael Coats said he had worried the uncertainty would deter astronaut candidates from applying. But NASA still received 3,564 applications from pilots, engineers, scientists and teachers — all of them fully aware they would not fly on the shuttle and would rely on Russian Soyuz craft to get to the space station. The new class is taking intensive Russian language lessons as part of their training.

Hernandez said the new candidates were fully aware when they applied that the shuttle program would be ending soon, and they willingly signed up for space station-based missions.

“But for my class and other classes, it’s fair for them to consider whether they want to fly station missions,” he said. “I really don’t think they’re thinking, ‘I’m not going to get a spaceflight’ — it comes down to a lifestyle. When we trained for a shuttle mission, most of the training, 95 percent of it, was here in Houston. At the end of the day we went back home to our families.” 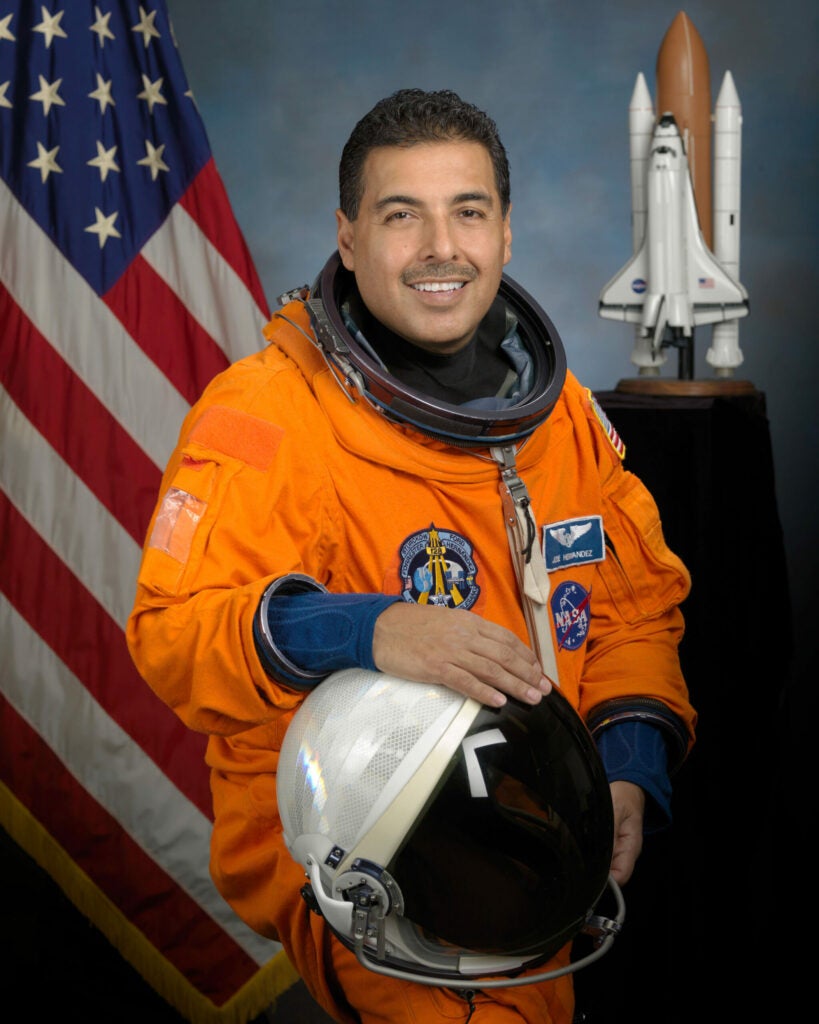 So what do you do next when your resume says “space shuttle trip?”

Chiao struck out on his own, working as a consultant, college professor, motivational speaker and wrangler of twin 4-year-old girls. He also served on the Augustine Commission, tasked with setting a new course for NASA, and which recommended scuttling the Constellation program. He supports developing the Orion vehicle, but he also supports commercial spaceflight development — he’s a consultant for private ventures hoping to build their own spacecraft, and he believes he may even return to orbit someday aboard one of them.

Hernandez went to work for MEI Technologies, a Houston-based technology firm that has worked with NASA and with other aerospace companies. He wants to grow the company and serve as a role model to other young Americans, especially Hispanic Americans, he said. His first day was Jan. 31.

Neither expects a mass astronaut exodus, because everyone knew the shuttles had to retire at some point. Transitions between programs are always difficult, Chiao noted — it was hard for the astronaut corps who bridged Apollo to Skylab to the shuttle program, he said. Granted, this is a much longer gap.

“I feel for these guys; they were told they wouldn’t fly on the shuttle, they would fly on the next vehicle, and they’re watching the shuttle wind down and they have no idea when they’re going to fly,” Chiao said of the 2009 class. “By timing they can’t control, they came in at a time of transition which results in all this uncertainty.”

On the other hand, they know they’ll get to space somehow, on Russian rockets or privately developed spacecraft.

“If I were one of these guys, would I come to NASA? Probably. My boyhood dream was to become an astronaut,” he said.

Now that he’s realized that dream and moved on, he’s often asked if he misses any of it.

“I think that six and a half month flight was really satisfying,” he said. “Of course I miss some of the folks there at NASA. But I don’t miss being in space. Yet.”