In Japan, robot-led weddings, robot factory workers and even squeaky robot pets are all fine and good. But in-home helper... 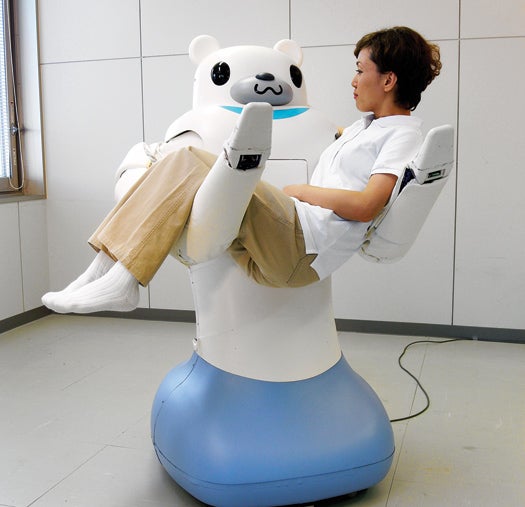 In Japan, robot-led weddings, robot factory workers and even squeaky robot pets are all fine and good. But in-home helper bots, which are the main goal of many robotics research projects, are anything but widespread, even in that robo-friendly country. Apparently old people and sick people, even in Japan, still prefer that human touch.

Rather than humanoid robots that do favors like pick up juice boxes, and even be-limbed ‘bots that wash people’s hair, some roboticists are increasing their focus on machines like self-adjusting beds that turn into wheelchairs, as this BBC story reports.

Especially in Japan, efforts to build lifelike, useful humanoid robots often center on care for the elderly. Japan is an aging country, and it admits very few immigrants who could work as nursing home attendants or in-home care providers. But so far, the robots can’t do enough to be very useful, robot companies and analysts tell the BBC.

Cute, pet-like robot companions have sold modestly well, the BBC notes — more than 1,000 Paro baby seal ‘bots are in Japanese nursing homes and hospitals, as well as private homes. This is not a staggering figure, but that could be because of its $2,800 price tag.

Joseph Engelberger, 85, who invented the first industrial robot in the 1950s, said robots ought to be more common. Every year, 200,000 elderly Americans fall and break a leg, and robots could help prevent that, he tells the BBC: “Robots should cost the same as a Mercedes and could be rented out. That would be a bargain compared to paying $600 a week for help.”

After years of spending billions of yen on humanoid robot research, the Japanese government is increasingly focused on simpler, more practical robot platforms that can perform simple tasks. The five-year Home-use Robot Practical Application Project, started in 2009, seeks a bot that can be used as both a wheelchair and bed; a cleaning robot; a security robot; a wearable robot suit that assists daily activities; and a two-wheeled rideable robot, according to Tech-On.

These single-minded ‘bots might be more palatable to elderly people and patients, the BBC says — already, some hospital robots have been abandoned because patients didn’t like them. A $100,000 hospital model “put patients off,” the BBC says: “We want humans caring for us, not machines,” one patient said.