The most ingenious engineering feats of 2022

Solar-powered consumer gadgets, an AI that can generate images from text, and more ground-breaking tech are the Best of What’s New. 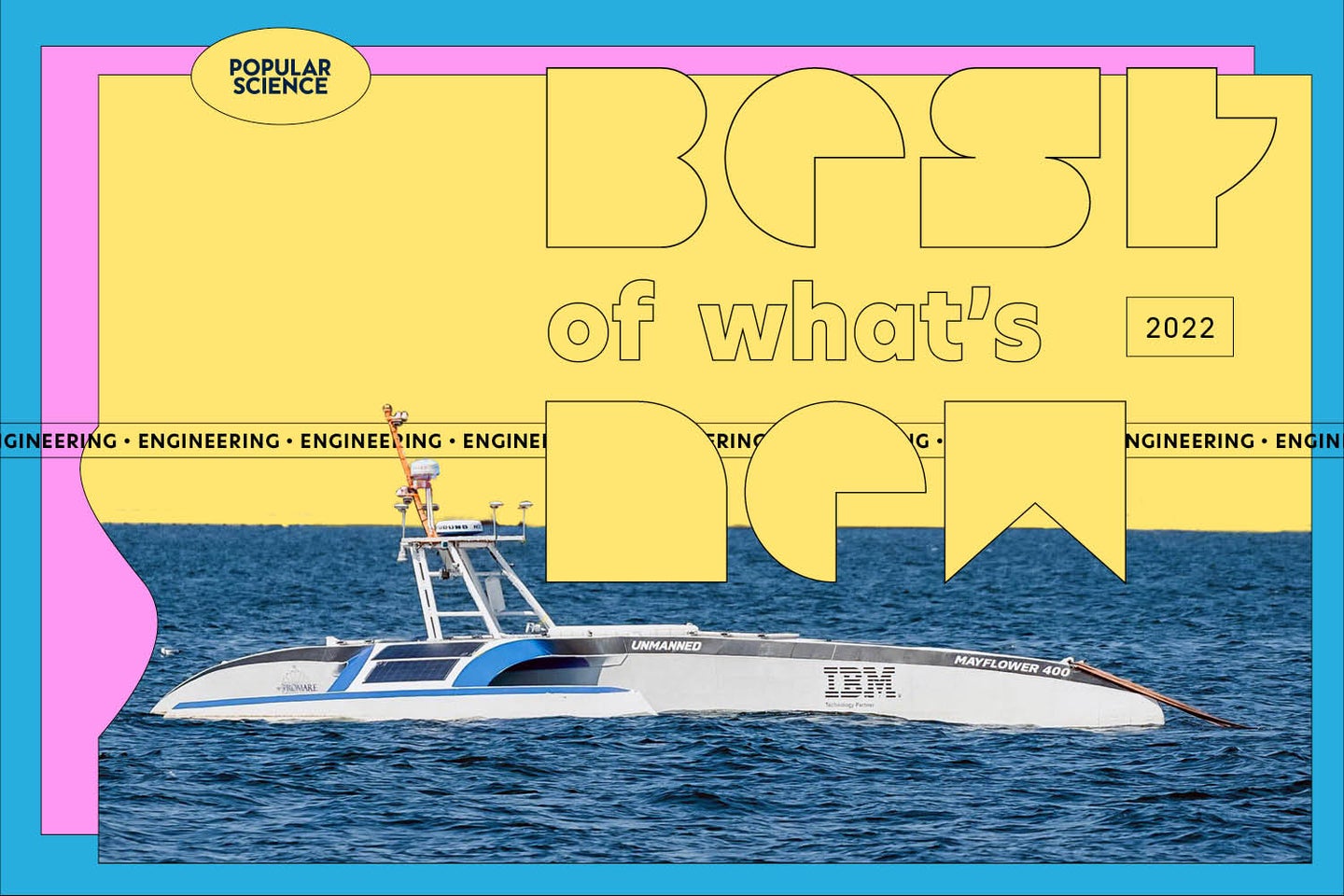 Zero-emissions vehicles, artificial intelligence, and self-charging gadgets are helping remake and update some of the most important technologies of the last few centuries. Personal devices like headphones and remote controls may be headed for a wireless, grid-less future, thanks to a smaller and more flexible solar panel. Boats can now sail human-free from the UK to the US, using a suite of sensors and AI. Chemical factories, energy facilities, trucks and ships are getting green makeovers as engineers figure out clever new ways to make them run on hydrogen, batteries, or other alternative, non-fossil fuel power sources.

1915 Çanakkale by the Republic of Turkey: The world’s longest suspension bridge

An international team of engineers had to solve several difficult challenges to build the world’s largest suspension bridge, which stretches 15,118 feet across the Dardanelles Strait in Turkey. To construct it, engineers used tugboats to float out 66,000-ton concrete foundations known as caissons to serve as pillars. They then flooded chambers in the caissons to sink them 40 meters (131 feet) deep into the seabed. Prefabricated sections of the bridge deck were carried out with barges and cranes, then assembled. Completed in March 2022, the bridge boasts a span between the two towers that measures an incredible 6,637 feet. Ultimately the massive structure shortens the commuting time across the congested strait, which is a win for everyone.

When carrying a full load of rock, the standard issue Komatsu 930E-5 mining truck weighs over 1 million pounds and burns 800 gallons of diesel per work day. Collectively, mining trucks emit 68 million tons of carbon dioxide each year (about as much as the entire nation of New Zealand). This company’s solution was to turn to hydrogen power, and so Anglo American hired American contractor First Mode to hack together a hydrogen fuel cell version of their mining truck. It’s called NuGen. Since the original Komatsu truck already had electric traction motors, powered by diesel, the engineers replaced the fossil-fuel-burning engine with eight separate 800-kw fuel cells that feed into a giant 1.1 Mwh battery. (The battery further recaptures power through regenerative braking.)  Deployed at a South African platinum mine in May, the truck refuels with green hydrogen produced using energy from a nearby solar farm.

Hydrogen can be a valuable fuel source for decarbonizing industrial processes. But obtaining the gas at scale requires using energy from natural gas to split water into hydrogen and oxygen with electrical currents. To be sustainable, this process needs to be powered with renewables. That’s the goal of an industrial consortium in Spain, comprised of the four companies listed above. It’s beginning work on HyDeal España, set to be the world’s largest green hydrogen hub. Solar panels with a capacity of 9.5 GW will power electrolysers that will separate hydrogen from water at an unprecedented scale. The project will help create fossil-free ammonia (for fertilizer and other purposes), and hydrogen for use in the production of green steel. The hub is scheduled to be completed in 2030, and according to its estimates, the project will reduce the greenhouse gas footprint of Spain by 4 percent.

Art students will often mimic the style of a master as part of their training. DALL-E 2 by Open AI takes this technique to a scale only artificial intelligence can achieve, by studying hundreds of millions of captioned images scraped from the internet. It allows users to write text prompts that the algorithm then renders into pictures in less than a minute. Compared to previous image generators, the quality of the output is getting rave reviews, and there are “happy accidents” that feel like real creativity. And it’s not just artists—urban planning advocates and even a reconstructive surgeon have used the tool to visualize rough concepts.

The P12 shuttle by Candela: A speedy electric hydrofoil ferry

When the first Candela P12 electric hydrofoil goes into service next year in Stockholm, Sweden, it will take commuters from the suburbs to downtown in about 25 minutes. That’s a big  improvement from the 55 minutes it takes on diesel ferries. Because the P12 produces almost no wake, it is allowed to exceed the speed restrictions placed on other watercraft; it travels at roughly 30 miles per hour, which according to the company makes it the world’s fastest aquatic electric vessel. Computer-guided stabilization technology aims to make the ride feel smooth. And as a zero-emissions way to avoid traffic congestion on bridge or tunnel chokepoints without needing to build expensive infrastructure, the boats are a win for transportation.

Petrochemical plants typically require acres of towering columns and snaking pipes to turn fossil fuels into useful products. In addition to producing toxic emissions like benzene, these facilities put out 925 million metric tons of greenhouse gas every year, according to an IEA estimate. But outside Houston, Solugen built a “Bioforge” plant that produces 10,000 tons of chemicals like fertilizer and cleaning solutions annually through a process that yields zero air emissions or wastewater. The secret sauce consists of enzymes: instead of using fossil fuels as a feedstock, these proteins turn corn syrup into useful chemicals for products much more efficiently than conventional fossil fuel processes– and at a competitive price. These enzymes even like to eat pieces of old cardboard that can’t be recycled anymore, turning trash into feedstock treasure. Solugen signed a deal this fall with a large company to turn cardboard landfill waste into usable plastics.

Air conditioners and fans already consume 10 percent of the world’s electricity, and AC use is projected to triple by the year 2050. But there are other ways to cool a structure. Installed in an experimental building in Stuttgart, Germany, an external facade add-on called HydroSKIN employs layers of modern textiles to update the ancient technique of using wet cloth to cool the air through evaporation. The top layer is a mesh that serves to keep out bugs and debris. The second layer is a thick spacer fabric designed to absorb water—from rain or water vapor when it’s humid out—and then facilitate evaporation in hot weather. The third layer is an optional film that provides additional absorption. The fourth (closest to the wall of the building) is a foil that collects any moisture that soaks through, allowing it to either be stored or drained.  A preliminary estimate found that a single square meter of HydroSKIN can cool an 8x8x8 meter (26x26x26 feet) cube by 10 degrees Kelvin (18 degrees F).

Consumer electronics in the U.S. used about 176 terawatt hours of electricity in 2020, more than the entire nation of Sweden. Researchers at the Swedish company Exeger have devised a new architecture for solar cells that’s compact, flexible, and can be integrated into a variety of self-charging gadgets. Silicon solar panels generate power cheaply at massive scale, but are fragile and require unsightly silver lines to conduct electricity.  Exeger’s Powerfoyle updates a 1980s innovation called dye-sensitized solar cells with titanium dioxide, an abundant material found in white paint and donut glaze, and a new electrode that’s 1,000 times more conductive than silicon. Powerfoyle can be printed to look like brushed steel, carbon fiber or plastic, and can now be found in self-charging headphones by Urbanista and Adidas, a bike helmet, and even a GPS-enabled dog collar.

Collecting data in the corrosive salt waves and high winds of the Atlantic can be dull, dirty, and dangerous. Enter the Mayflower, an AI-captained, electrically-powered ship. It has 30 sensors and 16 computing devices that can process data onboard in lieu of a galley, toilets, or sleeping quarters. After the Mayflower successfully piloted itself from Plymouth in the UK to Plymouth, MA earlier this year—with pit stops in the Azores and Canada due to mechanical failures—the team is prepping a vessel more than twice the size for a longer journey. The boat is designed to collect data on everything from whales to the behavior of eddies or gyres at a hundredth the cost of a crewed voyage and without risking human life. The next milestone will be a 12,000 mile trip from the UK to Antarctica, with a return trip via the Falkland Islands.

In Oregon, the Wheatridge Renewable Energy Facilities, co-owned by NextEra Energy Resources and Portland General Electric (PGE), is combining solar, wind, and battery storage to bring renewable energy to the grid at utility scale. Key to the equation are those batteries, which stabilize the intermittency of wind and solar power. All told, it touts 300 megawatts of wind, 50 megawatts of solar, and 30 megawatts of battery storage capable of serving around 100,000 homes, and it’s already started producing power. The facility is all part of the Pacific Northwestern state’s plan to achieve 100-percent carbon-free electricity by 2040.

Correction on Dec. 2, 2022: This post has been updated to correct an error regarding the date that the suspension bridge in Turkey was completed.