Biggest Japanese Warship Since WWII Will Carry Helicopters, No Planes

We want to know: Can it launch a vertical take-off and landing fighter? 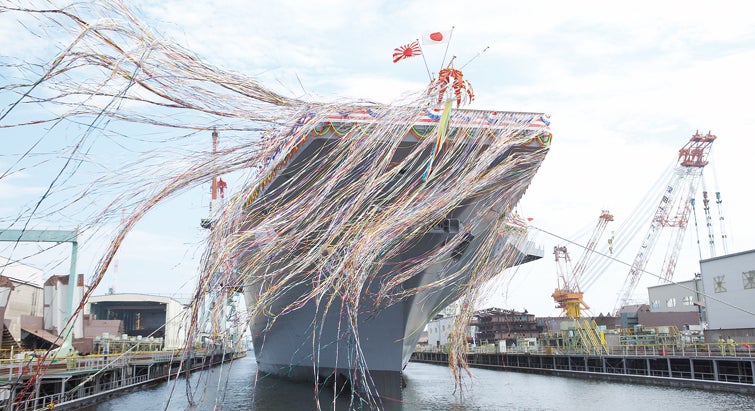 Japan yesterday unveiled the largest ship in its fleet since World War II. The 19,500-ton Izumo can carry up to 14 helicopters.

Because Japan’s constitution prohibits it from building up a military beyond what’s necessary for self-defense, the country is referring to its new helicopter carrier as a “helicopter destroyer” (carrier ships are capable of attacking coastal cities; destroyers are limited to fighting at sea).

Izumo is larger and can carry three more helicopters than the Hyuga-class helicopter destroyers, the previous largest ships in Japan’s fleet. For comparison, both are only a fraction of the size of a fully loaded American Nimitz-class carrier, which weighs in a 97,000 tons.

The Izumo’s ability to transport helicopters quickly over water will be crucial to rescue missions and disaster relief. But that doesn’t mean the Izumo lacks military capability, as helicopters are useful for anti-submarine warfare and bring great surveillance powers to Japan’s military.

Of course, helicopters aren’t what make this news, really. There’s one fighter currently in production that might work from a helicopter carrier, and that possibility is getting a lot of attention from people worried about strained relations between Japan and China. The big question about the Izumo is whether or not it can carry the vertical takeoff and landing (VTOL) variant of the F-35B Joint Strike Fighter.

In the past, helicopter-like VTOL V-22 Ospreys have successfully landed on Japan’s smaller Hyuga-class helicopter carriers, but it’s unclear whether the Izumo could launch an F-35B. To take off vertically, the F-35B sends exhaust from its jet engines straight down, which lifts the plane and also melts the helicopter landing pad. (The U.S. Marine Corp is reinforcing helicopter landing pads in preparation for this technology.) Plus, a carrier needs large, strong elevators to lift a craft like the F-35B from hangar to deck, and again, it’s uncertain whether the Izumo’s elevators would be up for the task.

Watch video of the unveiling below: