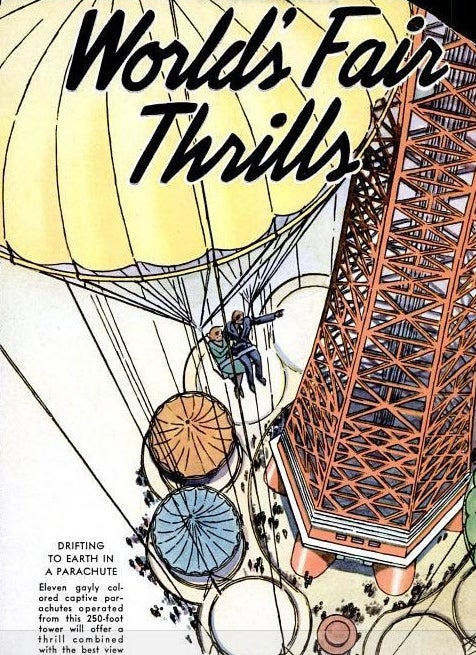 Last May, we had the privilege of visiting Expo 2010 in Shanghai, where we got first looks at the inventive pavilions. Where else, other than at an international exposition, can you tour a spiny Seed Cathedral or make contact with a giant robotic baby?

Since their inception, World’s Fairs have whisked millions of visitors to far-off places: Lisbon, Osaka, New York, and, of course, the future. The tradition of World’s Fairs goes back to 1851, when London hosted the Great Exhibition in Hyde Park’s Crystal Palace. Between then and Expo 2010, World’s Fairs have evolved from industrial exhibitions to platforms for cross-cultural dialogue, to vehicles for promoting the host countries themselves.

They might last just six months, but remnants of the most memorable expositions remain standing today. Those of us who have driven by the Unisphere in Queens and the Space Needle in Seattle can’t help but imagine the surrounding fanfare in their heyday. If mankind is still around in 5,000 years, our descendants may open the Westinghouse Time Capsule from the 1939 New York World’s Fair in awe of the millennia they missed out on.

Lucky for us, Popular Science has been around long enough to see how World’s Fairs have reflected the past century. We were there in 1893, when Nikola Tesla and Westinghouse Electric illuminated Chicago for the World’s Columbian Exposition. We were there in 1937, when Nazi Germany and the Soviet Union set up competing pavilions in Paris. We were there in 1962 when President John F. Kennedy skipped the Seattle Expo’s closing ceremony to deal with the Cuban Missile Crisis.

What are you waiting for? See our gallery for a tour through the past century’s grandest fairgrounds and pavilions. 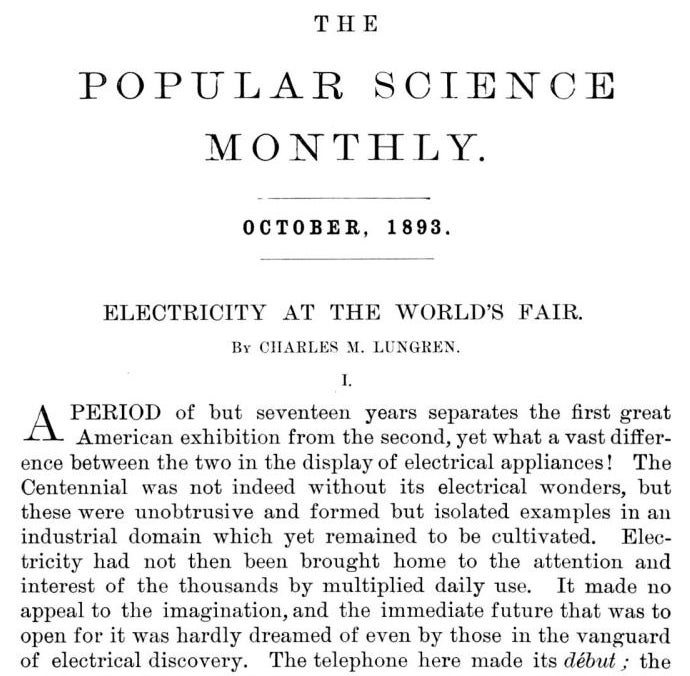 The World’s Columbian Exposition, or the Chicago World’s Fair, commemorated the 400-year anniversary of Christopher Columbus’ arrival in the Americas. Between May and October of 1893, Jackson Park became the White City, at once a carnival and an enchanting courtyard modeled on classical architecture. Since electric lights were a new development, power companies competed for the opportunity to light up the fairgrounds while showcasing their technology. Although General Electric (supported by Thomas Edison and J.P. Morgan) put up a good fight, Westinghouse Electric outbid them with an offer to power up the fair using Nikola Tesla’s alternating current technology. In addition to dazzling the fair’s 26 million visitors and 46 participating nations with electrically-illuminated fountains, Tesla and Westinghouse demonstrated Tesla’s creations, like his brand of fluorescent lamps, in an exhibit devoted to electricity. Read the full story in “Electricity at the World’s Fair” 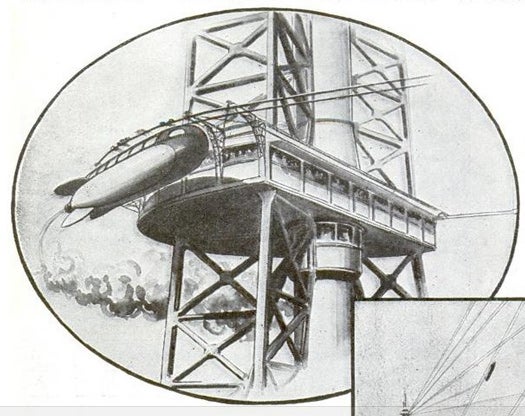 The second time Chicago hosted the World’s Fair, they named it “A Century of Progress” and selected a modernist “Rainbow City” aesthetic, in contrast to the previous expo’s classical “White City” design. The Sky Ride, an aerial tramway suspended across two towers, quickly became the fair’s most prominent attraction. Rocket-shaped cars, which emitted colorful puffs of steam, shuttled passengers across a lagoon in the fair’s center. Visitors could also view the expo from the tower’s observation decks, which were equipped with coin-operated telescopes. Historians estimate that up to 4.5 million people rode the Sky Ride before it was taken down after the fair’s closing. Read the full story in “‘Rocket’ Cars to Run at World’s Fair” 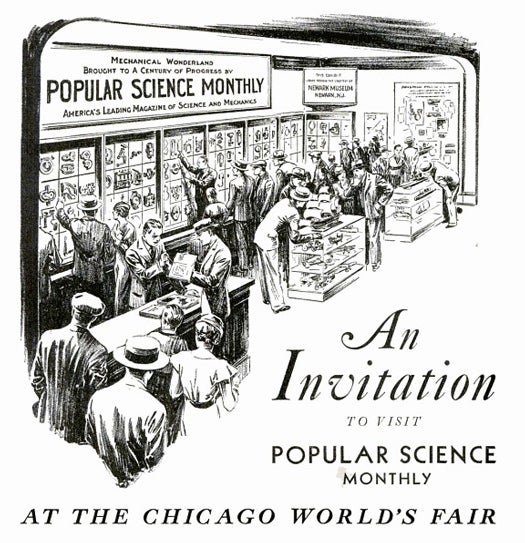 With help from New Jersey’s Newark Museum, we were able to open our very own exhibit at the 1933 Chicago World’s Fair. To partake in a Century of Progress, we showcased a “Mechanical Wonderland,” where visitors could operate over 200 pieces of machinery. William M. Clark, a retired businessman, generously provided a collection of engines, levers, pumps, axles, and crankshafts for us to display in boxlike frames. A section devoted to domestic machines showed visitors the inner workings of doorbells and pianos, among other things. As a bonus, they also received a behind-the-scenes look at our magazine’s production. Read the full story in “An Invitation” 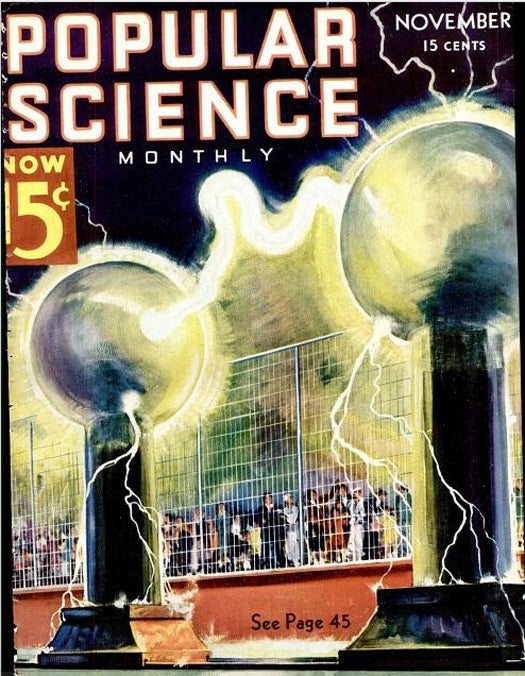 In 1937, the World’s Fair headed to Paris, which gave it the theme of Art and Technology in Modern Life. Although Nazi Germany and the Soviet Union’s competing pavilions stirred up some exciting controversy, visitors were also enthralled by the massive Van de Graaf generator located at an exhibit in the Grand Palais. Irene Curie Joliot, daughter of Marie Curie, and her her husband, Jean Frederic Joliot dreamed up the machine, which they intended researchers to use as a source of radioelements after the expo closed. Sadly enough, the generator was all but forgotten during World War II. Although nothing remains of the machine, the French government turned its home, the Palais de la Decouverte, into a science museum within the Grand Palais. Read the full story in “Giant Sparks to Thrill Visitors at Exposition” 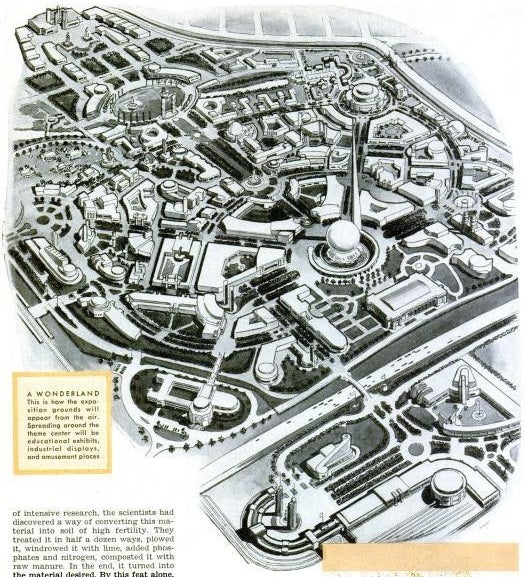 The New York World’s Fair, which ran for two seasons between 1939 and 1940, was not only the largest fair ever, but it became one of the 20th century’s most iconic international expositions. Located in Flushing Meadows-Corona Park, “The World of Tomorrow” lifted visitors’ spirits at the height of the Depression and second World War. Both Franklin D. Roosevelt and Albert Einstein gave speeches on its opening day, while exhibits like the Westinghouse Time Capsule gave people incentive to embrace their culture during a very bleak era of history. The capsule enclosed copies of Life magazine, a kewpie doll, seeds, and writings in a tube not to be opened for 5000 years. The Jewish Palestine Pavilion showcased concepts of a contemporary Jewish state, which of course, became modern-day Israel. Great Britain even displayed the actual Magna Carta document in the British pavilion, where it remained until after the war. Read the full story in “Building a World’s Fair” 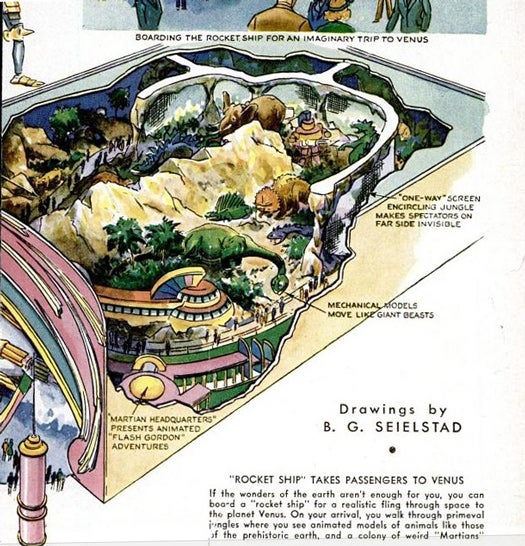 The fairgrounds in Flushing were split into several themed zones, including a Transportation Zone, a Food Zone, and a Government Zone. The Amusement Zone featured rides like bumper cars and a stationary rocket ship, pictured left, where passengers went on an imaginary trip to Venus. After watching a couple of Flash Gordon films, audiences would tour a primeval, extraterrestrial jungle colonized by Martians and overrun with dinosaurs. Visitors seeking more physical thrills could head to the nearby bobsled ride, which was essentially a roller coaster without loop-de-loops, and the parachute tower, where passengers could ride on swings elevated 25 stories above ground. Read the full story in “World’s Fair Thrills” 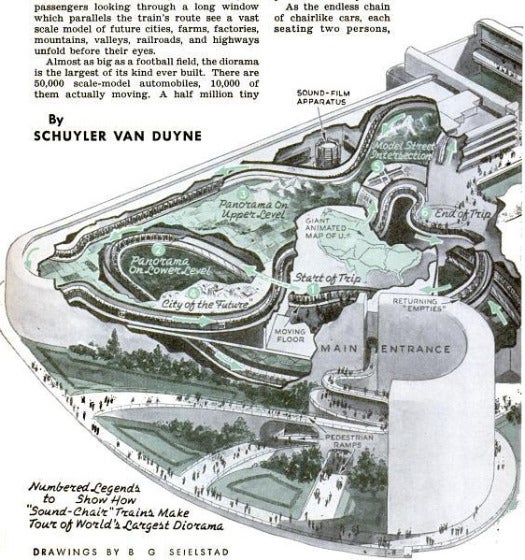 For their pavilion at the New York World’s Fair, General Motors featured a ride called “Futurama,” a train that would transport passengers to “the wonderworld of 1960.” A voiceover recording entranced people with its promises of an urban Shangri-La filled with personal vehicles, superhighways, and circular airports. The pavilion became so popular that people would stand in line for hours to catch a glimpse of GM’s diesel-powered future. Read the full story in “Numbered Legends to Show How Sound-Chair” Trains Make Tour of World’s Largest Diorama” 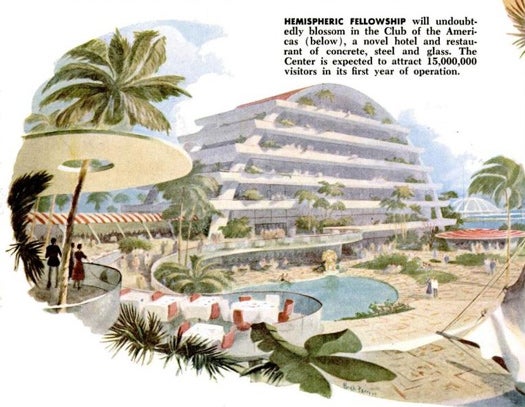 A Permanent Fair in Florida?: April 1955

During the mid-1950’s, Florida decided to jump on the “-rama” bandwagon by constructing a permanent international expo called the “Inter-American Center,” or Interama. The permanent fair would be divided into three sections (Science, Art, Industry), where visitors could visit United States and Latin American pavilions based on those themes. The complex, centered around a lake, would also contain an amphitheater for concerts and restaurants serving native cuisines, while a glass monorail would provide an elevated tour of the area. As exciting as these plans sound, the Interama project encountered so many obstacles that Gerald Ford had to cancel it in 1974. Read the full story in “Florida Plans New-World Fair” 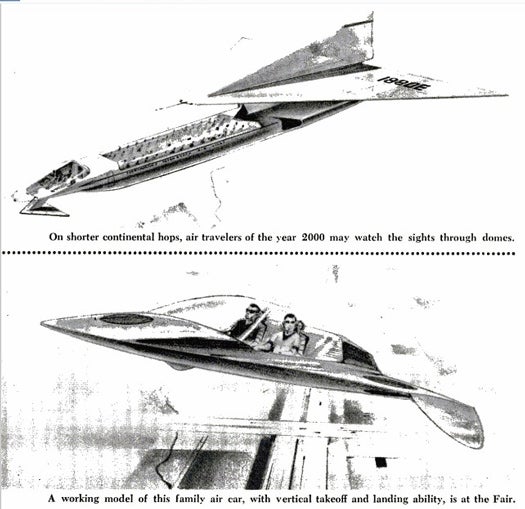 The Seattle World’s fair, called the Century 21 Exposition, used an aerospace aesthetic to fuel America’s determination to win the Space Race against the Soviet Union. Beneath the towering Space Needle, visitors toured exhibits promoting mankind’s mastery of technology in the year 2000. Organizers imagined that just 40 years into the future, families would ride flying cars and own personal submarines. A Coliseum called “The World of Tomorrow” introduced people to a future where homes would be equipped with solar-powered ovens, climate-controlled bedrooms, and sound waves programmed to dispel dirt. Although none of these predictions have come to fruition yet, AT&T;’s booth correctly foresaw a future of cordless phones and office machines that could communicate with each other over miles of space — in other words, the Internet. Read the full story in “What’ll It Be Like in 2000 A.D.?” 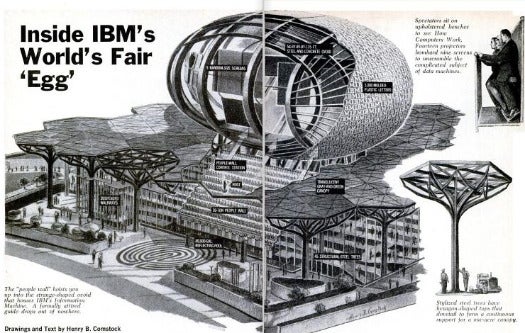 In 1964, New York hosted a World’s Fair dominated by American industrial companies. The Bureau of International Expositions (BIE), which is in charge of sanctioning world’s fairs, did not approve of this one since it charged rental fees for pavilions. The BIE discouraged its member countries from participating in the fair, hence its consequent corporate atmosphere. IBM constructed one of the fair’s most popular pavilions, an extravagant, egg-shaped theater showing visitors how computers work. Interactive exhibits below the theater let people play with the company’s latest gadgets. Read the full story in “Inside IBM’s World’s Fair ‘Egg'” 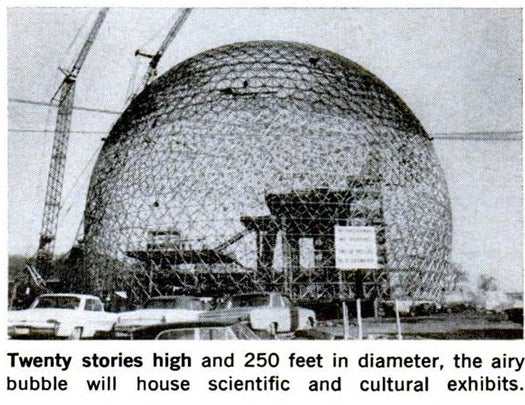 The Montreal World’s Fair, or Expo ’67, attracted over 50 million visitors and 62 participating nations, making it the 20th century’s most successful international exposition. The U.S. pavilion was a 200 foot-high geodesic dome designed by inventor R. Buckminster Fuller, a trailblazer for geodesic structures. The dome used sophisticated window shades to control its inside temperature and also housed the world’s longest escalator at the time. In 1976, a fire ruined the dome, so it closed until 1990, when Environment Canada turned the biosphere into an interactive museum dedicated to environmental issues of the Great Lakes-Saint Lawrence River regions. Read the full story in “U.S. Builds a Skybreak Bubble for Montreal Fair” 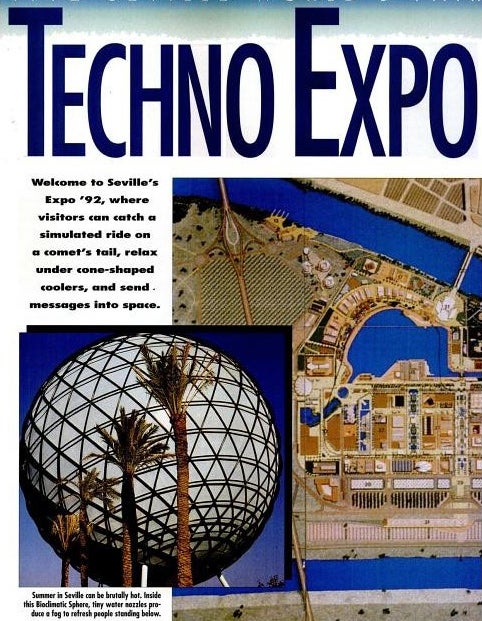 Like the World’s Columbian Exposition, the Universal Exposition of Seville (Expo ’92) celebrated Christopher Columbus’ arrival in the Americas. Aptly titled “The Age of Discovery,” the exposition was held near the monastery where Columbus reportedly planned his epic journey 500 years earlier. Over 100 participating nations competed to build the best pavilion. Japan contributed the world’s largest wooden structure, while the Plaza de Americas accommodated booths from every South American nation. In anticipation of man’s journeys through further horizons, “Pavilion of the Future” functioned as a planetarium that gave visitors the sensation of floating through space. Read the full story in “Techno Expo”
archive gallery
archives
Popsci Archive
The Future Then
world's fair