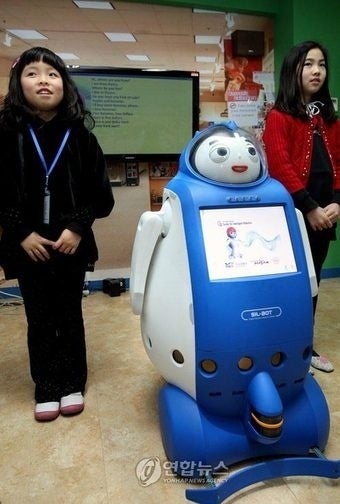 A shortage of English teachers has compelled South Korea to take the next logical step and plan a $45 million rollout of robotic teaching assistants. That official go-ahead follows several months of robot trials, io9 says based on Korean news reports. But the idea of replacing old fashioned human English teachers has already stirred much debate.

The robotic teachers would deploy in 500 preschools by 2011, and 8,000 preschools and kindergartens by 2013. In the short run, that could help address the lack of English teachers in rural areas or remote islands. Learning English represents a necessary educational step for competitive South Korean students, and especially those aiming to study abroad at major universities in the U.S.

But South Korean robotics experts have already begun predicting that the bots could replace more than 30,000 native English teachers in Korea’s language institutes within the not-so distant future, according to the Korea Times. Most of those teachers hail from the U.S., Canada, UK and Australia.

By contrast, many teachers interviewed by the Korea Times found the notion of being replaced by robots fairly laughable and of low concern. The South Korean government has so far only endorsed robotic teachers to help alleviate the shortage of human teachers.

Watching some of the videos, it’s also hard to see robots that resemble dopey blue penguins as a threat (And an aside: What’s up with the blue genital?). But there’s little doubt that South Korea may surpass even Japan when it comes to deploying robots. The nation already has plans to build its first robot theme park, perhaps as a fun precursor to Westworld. And the same experts who predict the end of human English teachers also expect to see robotic golfing coaches by 2015.