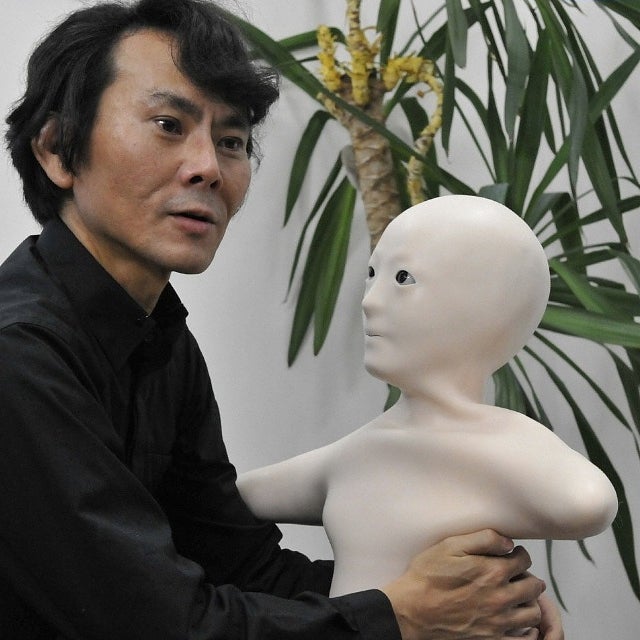 Maybe it’s just us, but some Japanese robots are a special brand of creepy. The moaning mouth was bad enough, but now there’s this tadpole-shaped telepresence robot, hereby christened Larvabot.

The Telenoid R1 is meant to be a minimalist human, so details are restricted to its eyes and face, which are strangely realistic. Its body is limited to flipper-like arms and a stylized torso that ends in a mermaid-ish taper.

It is the newest creation of Japanese roboticist Hiroshi Ishiguro, a professor at Osaka University known for creating telepresence androids, designed to “transmit the presence” of people to another place.

Telenoid users interact with people at a distance through a laptop, as shown in the video below. The control system tracks the user’s face and head motion and captures his or her voice, then relays them to Telenoid, which expresses them. It’s about 31 inches tall and weighs 11 pounds.

IEEE Spectrum says Ishiguro’s goal was to create a tele-operated robot that could appear male or female, old or young, and that could be easily transported.

His team admits it’s creepy at first, but they swear you get used to it: “If a friend speaks from the telenoid, we can imagine the friend’s face on the telenoid’s face. If we embrace it, we have the feeling, that we embrace the friend.”

It will go on sale in October, with the high-end model priced at $35,000 and a lower-end model setting you back about $8,000, IEEE Spectrum reports.

PopSci contributor Clay notes that it resembles a creepy version of Casper the Friendly Ghost. I thought of Gloworm, a relic from my ’80s childhood. What do you think?