University of Washington and Stanford researchers have created what could become a model for future microbots: a one-inch microchip sporting... 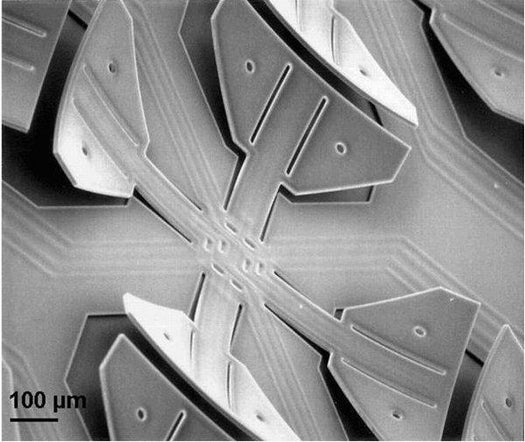 University of Washington and Stanford researchers have created what could become a model for future microbots: a one-inch microchip sporting 512 thermal-powered “feet” that can carry more than seven times its own weight while moving in any direction.

The tiny robotic centipede weights just half a gram, is only a third of an inch wide and is only the thickness of a fingernail. And while its tiny payload capacity isn’t much on the macro scale, at small sizes the centipede is actually quite strong. Such microbots could come in handy for everything from search and rescue to environmental monitoring to espionage. Not to mention, the researchers haven’t even pushed the ‘bot to its full capacity.

The microchip — which is also the robot’s body and feet — was developed in the ’90s as a prototype for a ultra-thin printer or scanner. Since then it’s been reconfigured a few times for different purposes, but now the researchers have flipped it over so the cilia-like feet are on the bottom.

The feet themselves are essentially electrical wires sandwiched between two thin layers of different materials. One material expands under heat a bit more than the other, so a current traveling through the wire causes one side to expand slightly more than the other, making the feet curl. A precisely choreographed sequence of this causes the feet to shuffle along in any direction — even sideways — moving each row of feet 20 to 30 times per second.

Even with all that movement, the microbot is limited to a speed of just 3 feet per hour, a sub-par top velocity for purposes of search and rescue or other time-sensitive tasks. But the chip was never designed to be a microbot, and therefore has not been optimized to minimize its weight, its energy consumption, or its strength. Researchers estimate they could trim the ‘bot’s weight by 90 percent. Soon microbots like these could find jobs exploring collapsed buildings, working hazardous environments like collapsed mineshafts, or carrying tiny sensors into other tight spaces.