A troupe of dancing robots made its official debut Monday at the ongoing Shanghai 2010 Expo, wowing viewers with synchronized... 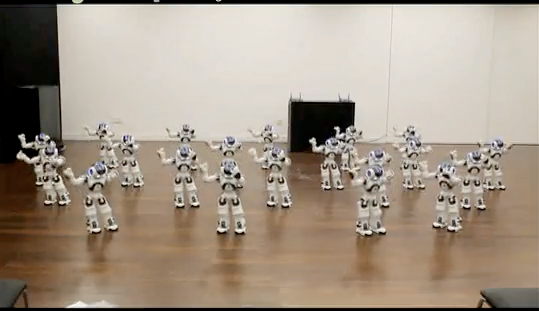 A troupe of dancing robots made its official debut Monday at the ongoing Shanghai 2010 Expo, wowing viewers with synchronized ballet-like movements. The Nao robot, designed by French firm Aldebaran Robotics, can be fully programmed to move in unison.

Check out their moves in this three-song compilation, which includes the finale of Ravel’s Bolero, one of the best-known French orchestral pieces. The dancing bots debuted Monday in honor of the Expo’s French Pavilion Day.

The Nao robot weighs about 9.5 pounds and stands roughly 23 inches tall. It has four microphones in its head and is equipped with a voice recognition and analysis system. So far, it understands English and French and will respond to your commands with whatever behaviors you choose.

It also has Wi-Fi connectivity, so various Naos can talk to each other, and it has 25 degrees of freedom, meaning it can dance even better than shown here. They can even out-perform humans in a pop-and-lock dance.

Various remixes are already making the rounds on the Internet. I’d like to see one with this.