How It Works: The Lab That Fits in Your Hand

A piece of plastic the size of a credit card, combined with a book-size gadget, can diagnose as many deadly diseases as big laboratory machines can—but quickly, cheaply and in remote locations 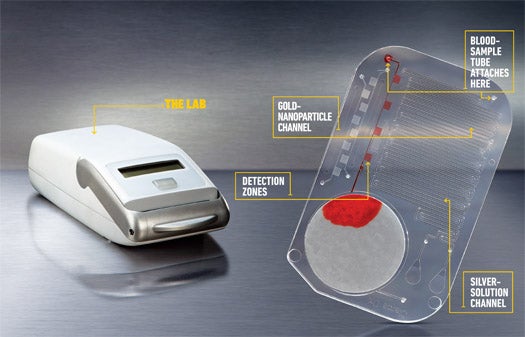 Most blood tests require shipping vials off to a lab, followed by several days of nail biting. This kit, one of the first that can diagnose multiple diseases on the spot, shrinks an entire lab into a two-piece portable package that even novices can use. A disposable, $1 plastic card, formed through injection molding, holds miniature versions of test tubes and chemicals. In place of technicians or $100,000 machines, a battery-powered, $100 gadget mixes the molecules. The prototype, from Claros Diagnostics and Columbia University bioengineer Sam Sia, is currently being tested in Rwanda, where potentially lethal diseases like HIV/AIDS often go undetected. Sia’s latest study estimates that global access to a low-cost test for syphilis, for example, could prevent a million stillbirths a year. “In the U.S., point-of-care devices like this are attractive because they are more convenient,” he says. “In developing countries, there is simply no alternative.”

1. Add Blood Sample: A worker draws a drop of blood into a tube and attaches the tube to holes in the card. Then she puts the card into the handheld analyzer. Inside, a micropump—essentially a small vacuum—sucks the blood through a series of detection zones made up of tiny zigzagging channels.

2. Trap Signs of Disease: In each zone, the walls are lined with a different antibody or antigen—a molecule that binds to disease-indicating proteins—that makes those proteins stick to the sides as blood flows by. One zone captures anti-HIV antibodies, one collects syphilis markers, and in the future, the other zones will trap more STDs. The blood passes a blank zone, used to rule out false positives, and pools on paper to avoid a mess.

3. Make the Signs Visible: Microscopic disease proteins are hard to detect, so two kinds of molecules turn them a color that the analyzer can measure. The molecules (prepackaged in the card) travel to the detection zones when the vacuum sucks them up through channels, across the blood-sample tube and down to the detection zones. (The path lengths ensure that the molecules reach the zones in the right order.) The first set, antibodies tagged with gold nanoparticles, attach to any captured proteins. A silver development solution follows, plating onto the gold particles to form easily seen silver.

4. Get the Results: The solid silver is visible to the naked eye, but a photodetector in the analyzer measures the intensity of each zone more exactly. That lets it determine if there’s enough silver, and thus enough trapped proteins, to indicate disease. Then it flashes yes or no on its digital display—with accuracy similar to lab tests—just 20 minutes after the first finger prick.