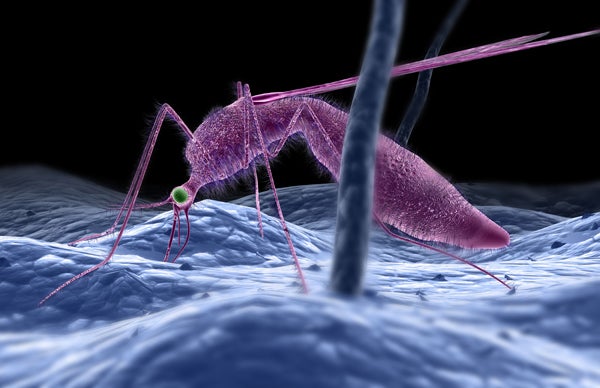 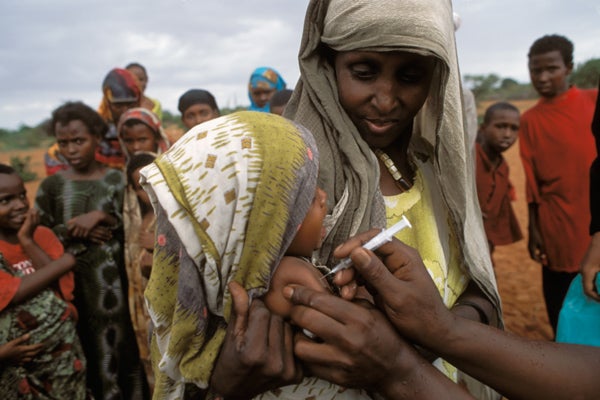 An infant receives a vaccine in Kenya.

A vaccine with a 53 percent success rate doesn’t normally call for a celebration. But when that means protecting one in every two African children from a disease that kills a kid every 30 seconds, those odds start looking better. “The impact is tremendous,” says Joe Cohen, inventor of the first malaria vaccine. “We could save hundreds of thousands of kids every year.”

This spring, pharmaceutical giant GlaxoSmithKline will enroll 16,000 infants and toddlers, the groups most at risk, in what could be the largest malaria-vaccine trial to date in Africa, setting up labs in 11 hospitals in Kenya, Burkina Faso, Malawi and four other countries. The test follows on the success of recent small-scale studies in Kenya and Tanzania that reduced infection by 65 percent in infants. “We’re going to make sure the vaccine works everywhere in sub-Saharan Africa,” says Cohen, vice president of R&D for Vaccines for Emerging Diseases and HIV at GSK. If this final clinical trial replicates the results of previous studies, the company hopes to submit the vaccine for regulatory approval in 2011, with the ultimate goal of including it in the World Health Organization’s free infant-immunization program, which covers measles, tuberculosis and other diseases.

Until now, malaria, contracted when a female Anopheles mosquito carrying the Plasmodium parasite bites a human, has proved impossible to eliminate in tropical and subtropical developing nations, particularly in sub-Saharan Africa. There, parasites and mosquitoes have grown resistant to antimalarial drugs and insecticides, and 90 million children don’t have access to mosquito-proof bed nets. “These preventative methods are good,” Cohen says, “but an effective vaccine is essential for controlling malaria.”

The half-century-long road to a vaccine has been hampered by the parasite’s complex life cycle, shifting genetic makeup and unique ability to evade the immune system. After an infected mosquito bites a person, the parasite heads to the liver, invades red blood cells, and multiplies until the cells burst. If the invasion persists, it can shut down a child’s nervous system in hours. Many die of liver and kidney failures. Survivors suffer from anemia and brain damage.

Cohen’s formula could finally bring relief. The vaccine, called RTS,S and originally developed for the U.S. military, targets a protein specific to the parasite’s surface. A one-time exposure to this protein helps a child’s immune system prepare an army of antibodies that will detect the parasite and order immune cells to kill it—or at least inhibit its ability to multiply—the instant it hits the blood.

Even reducing the toll the disease exacts on global health and economies would be a success. Malaria kills one million people annually, most of them children younger than five, and sickens another 500 million. The disease accounts for 40 percent of public-health costs in sub-Saharan Africa, and the severe flu-like symptoms keep adults out of the workforce. WHO estimates that, had malaria been eradicated from sub-Saharan Africa 35 years ago, the region’s gross domestic product would be $100 billion richer.

Putting RTS,S into practice will cost about $500 million, according to Christian Loucq, director of the PATH Malaria Vaccine Initiative, funded largely by the Bill and Melinda Gates Foundation. In preparation for the large-scale trials, GSK and PATH have upgraded several pediatric wards in hospitals, equipping each with microscopes for testing blood samples and satellite networks to quickly share data. Meanwhile, a Harvard University research group will monitor the vaccine to make sure it works on all substrains of the parasite.

While several scientists continue to work on stopping malaria before it bites—either by killing mosquitoes before they transmit the parasite or destroying their breeding grounds—Loucq says RTS,S offers the best chance of reaching the United Nations’s Millennium Development Goal to stop the disease’s upward trend by 2015. “Vaccines for infectious diseases like polio and tuberculosis changed the picture entirely,” he says. “A 53 percent efficacy rate for a first-time vaccine puts us on the way to victory