The prize, awarded jointly to three scientists, celebrates the discovery of the immune system's front-line responders--though one winner succumbed to cancer three days before 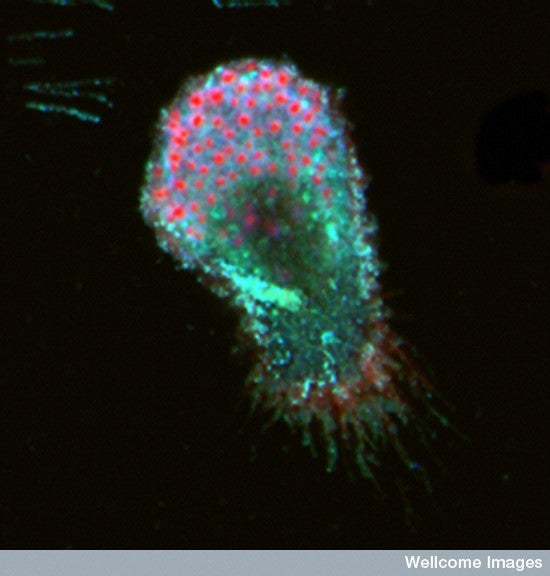 B0006230 Dendritic cell with podosomes Credit: Prof Gareth Jones. Wellcome Images images@wellcome.ac.uk http://images.wellcome.ac.uk An immature dendritic cell migrating over a fibronectin substrate. The actin-rich podosomes that mediate this migration show up as red dots. Dendritic cells are immune surveillance cells that migrate around the body, presenting antigens to other cells of the immune system. The podosomes are constantly forming and reforming as the broad leading edge cell moves forward. The green stain shows the transmembrane beta2 integrin subunits and the blue stain shows the vinculin that attaches the actin cytoskeleton to the cell membrane through the cytoplasmic tails of the integrin. Confocal micrograph 2005 Published: - Copyrighted work available under Creative Commons by-nc-nd 2.0 UK, see http://images.wellcome.ac.uk/indexplus/page/Prices.html. Wellcome Images
SHARE

[UPDATE 6 p.m.] Immune cells that protect us from the dangers of this microbe planet are behind this year’s Nobel Prize in medicine. Two of the three winners discovered receptor proteins that can recognize microbial invaders, activating the innate immune response. The third discovered dendritic cells, which serve as surveillance cells and can switch on the body’s adaptive immune response.

One half is awarded jointly to Bruce Beutler and Jules Hoffmann and one half goes to Ralph Steinman. But Steinman died on Friday after a battle with pancreatic cancer, according to Rockefeller University in New York, where he was a cell biologist and director of its Center for Immunology and Immune Diseases. He was diagnosed four years ago, and was able to extend his life using a dendritic-cell based immunotherapy of his own design, the university said. He was 68.

The Nobel committee learned he died three hours after it officially bestowed him with the honor, the Nobel Assembly said Monday. Steinman’s own university learned the sad news from his family, as officials were compiling information about his Nobel win. Nobel prizes are not awarded posthumously, but the Nobel Foundation’s rules specify that if a person wins an award and dies before accepting it, the prize is still presented.

“The decision to award the Nobel Prize to Ralph Steinman was made in good faith, based on the assumption that the Nobel Laureate was alive,” the assembly explained in a statement. “This was true – though not at the time of the decision – only a day or so previously.” The foundation further explains that this situation is unprecedented in the history of the Nobel Prize.

The split award honors research into the immune system’s dual nature. A group of first responder cells seek out and destroy invaders and block their ability to replicate, and a second group bats cleanup, producing antibodies that kill cells which have already been infected. Scientists now know a great deal about the genetic rules underlying these systems, but much of this knowledge stands on the shoulders of Beutler, Hoffmann and Steinman, the Nobel Assembly explains.

In 1996, Hoffmann, now 70, was working with some genetically modified fruit flies and infecting them with fungi or bacteria. He discovered that the activation of a gene called Toll is crucial for switching on the initial immune response that allowed his flies to fight off infection. Then in 1998, Beutler, now 54, was searching for a protein receptor involved in regulating septic shock, which results when the body is overwhelmed by infection. He found a mutation in a mouse gene that looked pretty similar to Hoffmann’s Toll gene. This gene codes for a receptor — nicknamed a Toll-like receptor — that binds to a bacterial product involved in septic shock.

Together, the work showed that insects and vertebrates shared similar molecules that activated the innate immune response — and now scientists knew what the molecules looked like. Since then, scientists have identified a dozen more Toll-like receptors in mice and humans.

Decades before that work, Steinman was pioneering research on the secondary immune response, the adaptive response. In 1973, he discovered the dendritic cell — so named because it has little tails, like dendrites in neurons — and set about explaining their function. They serve as the body’s surveillance cells, constantly moving around and sampling their environment. Steinman proved that dendritic cells activate T cells, a class of white blood cells that are important in adaptive immunity.

The immune researchers’ work has been crucial in understanding treatment and prevention of disease, from AIDS to cancer. The research is also relevant for understanding auto-immune and inflammatory diseases, in which the immune system attacks the body’s own cells.