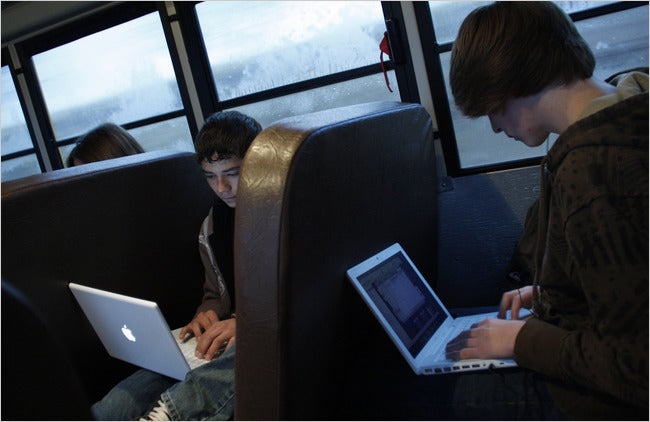 Putting a mobile Internet router on a yellow school bus has transformed a crowd of rowdy, bored teens into a quiet and well-behaved flock of studious students. That experiment at the Empire High School outside of Tucson, Arizona may soon replicate itself in school districts all across the nation, the New York Times reports.

The high school had already become a “digital school” in 2005 by issuing laptops instead of textbooks to students, and by offering strong Internet signals in every classroom as well as on the football field. But school officials decided to outfit a bus as a way of extending student productivity outside the classroom.

If the Empire High provides any reasonable sample, Wi-Fi access aboard buses appears to eliminate almost all behavioral hijinks. Many students have also used their bus time as a “rolling study hall,” even if some naturally spend their time playing games or Facebooking. Perhaps one or two were quietly working on their next big idea to join these high school geniuses.

Autonet Mobile provided the router at the cost of $200, along with a $60 per month Internet service contract. The company has already sold its routers to other schools in Florida, Missouri, and Washington, D.C, which means that students will soon have even fewer excuses to struggle with homework during homeroom.