When TV went digital, Verizon, AT&T and other cellphone carriers shelled out a combined $19 billion for some of the... 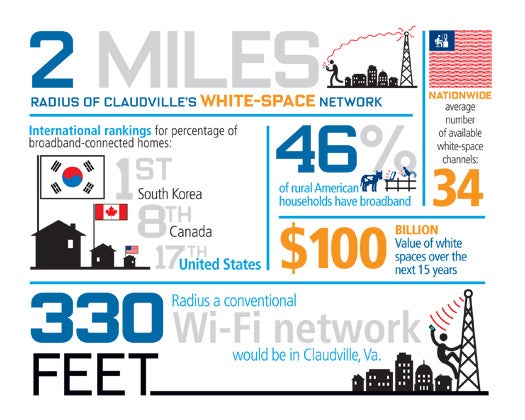 When TV went digital, Verizon, AT&T and other cellphone carriers shelled out a combined $19 billion for some of the freed-up airwaves, known as white spaces. Now wireless company Spectrum Bridge is using the parts that are still unclaimed to deliver high-speed Internet from its broadcast tower to your laptop computer.

As soon as next month, the Federal Communications Commission is expected to allow commercial white-space Internet, which could help hook up the 54 percent of rural homes without broadband. These white-space channels use lower frequencies than Wi-Fi, so they can pass through physical obstacles easier and travel farther. Last October, Spectrum activated the first white-space network, in Claudville, Virginia, under an experimental FCC license. The town’s hilly landscape and abundant trees made conventional wireless near-impossible, so the company set up an Internet-connected radio transmitter at the town’s edge and gave the school, business district and a few homes modem-like radio receivers. “They’ve been trying to get connected to the outside world for the better part of this century,” says Jeff Schmidt, Spectrum’s director of engineering.

Because wireless mics and news cameras can also use white-space channels, Spectrum’s system chooses among unused channels listed by the FCC. If all goes well in Claudville, the company plans to test the tech in the more crowded airwaves of cities this year.