Augmented Identity App Helps You Identify Strangers on the Street

By this point, we’re all familiar with augmented reality, but Swedish mobile software firm The Astonishing Tribe is taking information... 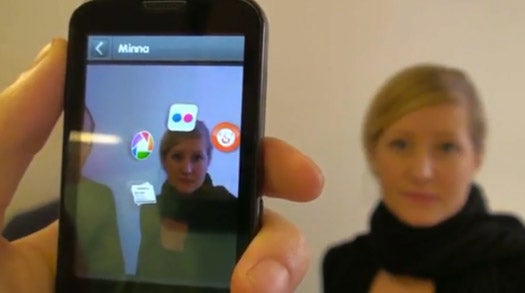 By this point, we’re all familiar with augmented reality, but Swedish mobile software firm The Astonishing Tribe is taking information overload to the next logical step: augmented identity. Mashing up face recognition technology, computer vision, cloud computing, and augmented reality with the complex digital lives many of us lead on the Internet, TAT has created an app that allows you to gather information on a person and their social networking life simply by pointing your camera phone at their face.

Dubbed Recognizr, the app essentially works like this: the user points the camera at a person across the room. Face recognition software creates a 3-D model of the person’s mug and sends it across a server where it’s matched with an identity in the database. A cloud server conducts the facial recognition since and sends back the subject’s name as well as links to any social networking sites the person has provided access to.

The software even takes note of the position of the person’s head within your field of view, popping up icon links to the subject’s social sites around his or her head without obscuring the strikingly lovely features that caught your attention in the first place.

Given the vast catalog of photos already posted to more social corners of the Web like Twitter and Facebook, the software opens up our social networks to some unique possibilities. And though it may seem counter-intuitive, the face recognition aspect of this particular brand of AR apparently works better than some other apps that simply gather information on places or objects, because its easy for the software to figure out exactly what you want to search for — the human face (as opposed to a particular building on a block with many other buildings, edifices, and other objects).

Of course, where social networks go, advertisers and other more invasive data mining schemes are sure to follow. But privacy geeks can take a pre-emptive pipe-down; you have to opt into the service and upload a photo and profile in order to be ID’d by the system. The recognition algorithms are compatible with the iPhone as well as newer Android phones, though it seems the current demo only runs on phones with at least a five-megapixel camera and the Android OS.