Avatar Point-Counterpoint: All The ‘Future of Movies’ Talk Is For Real

Like many of you, I saw Avatar this weekend. And even though the fairly positive early reviews had tempered my... 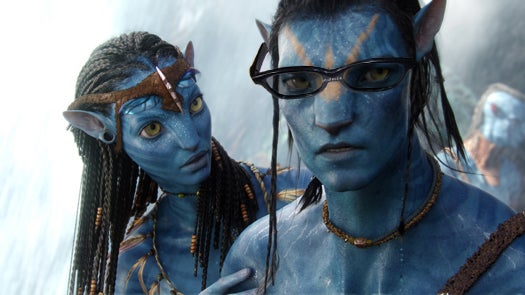 Like many of you, I saw Avatar this weekend. And even though the fairly positive early reviews had tempered my skepticism, I still had doubts as to whether I would enjoy Avatar‘s almost entirely synthetic, effects-driven, Papyrus-loving world. Despite this, as a devotee of all things futuristic, I was going to give it a shot. And now, unlike John, who wasn’t quite as moved, I’m poised to embrace our 3-D harbinger of the future of movies. Here’s why.

First, and most obvious, is that Avatar brings to life many of the seemingly far-out concepts for the future we all enjoy here on PopSci.com every day. And like the best science fiction, they usually have some semblance of a foundation in real-world innovations. Does James Cameron read PopSci? I think there’s a pretty good chance, considering some of the major technology themes in the film:

Here in the real world, breakthroughs in modern prosthetics continue to close the cyborgian gap between the human nervous system and man-made replacement limbs. Led by incredible projects like Dean Kamen’s “Luke Arm”, the wild idea of directly controlling a mechanical arm or leg with your brain is coming into focus as an attainable goal.

Expanding on this, one of the Na’vi’s most impressive accessories are their ponytails–which serve a double purpose both to highlight Cameron’s alien-fetish eroticization of his blue creations, and to allow them to perform brain-prosthesis-type mind-melds with Pandora’s other similarly-equipped beasts. By wrapping their ponytails’ tendrils around the tendrils of another, the Na’vi can sync their consciousness to talk to trees and fly their dragon-like lizard-horses by reflex.

It’s pretty awesome, and I want one. Which brings me to the second reason I loved the film–its almost too brilliant execution of escapism that is inspiring all of the “he’s changed movies forever” type of hype.

If you haven’t noticed yet, we’re all being nudged slowly but firmly into what the visual entertainment industry–from the writers and directors, the major studio heads, all the way up to the Sonys and Samsungs of the world–sees as the future of our movies, TV shows and video games: 3-D. At CES next month, you will see 3-D TVs trotted out as this year’s world’s-thinnest or world’s-largest, all promising to put us “inside” our entertainment (and, presumably, “outside” of the real world) like never before.

It is only fitting that the the most visually compelling 3-D movie ever made is centered around a multi-threaded plot of a series of escapes. There is Jake’s escape into an alien avatar, replacing his own disabled body with one of super-human, almost dream-like strength and ability; there are the Na’vi’s augmentation of their own consciousness with nature and their ancestors via their neural-network-interface ponytails, and of course, there is the escape of Jake, a human, from what has become a destructive and soulless race into a foreign culture that ultimately accepts him as one of their own.

This plot may come off as one-dimensional and flat only because it’s universal (All the reviews are right: Cameron essentially re-made Dances With Wolves with blue aliens instead of American Indians). And like John, I find it kind of amazing that one of the most technically sophisticated and innovative movies ever made is, in the end, a polemic against the distance we’ve placed between ourselves and the natural world. It plays on every human’s desire for acceptance into a like-minded group, and in the film, no one wants to be a part of the future humanity Avatar depicts. So what’s left are the Na’vi and their natural world.

And in many ways that’s exactly the point–Cameron’s made 3-D that’s addictive in its subtlety and its ability to enhance not just gimmicky, stuff-flying-out-of-the-screen shots, but every shot. It’s hard to take off your Kim Jong-Il glasses at the end because you don’t want to leave the world he’s created; it’s just another escape. So much so that it’s surprising Cameron is even allowing it to be shown in 2-D (the reason, obviously, is to reap money from the still-significant number of theaters not equipped for 3-D, but it was surely a difficult concession made by one of Hollywood’s craziest control freaks).

It’s indicative, though, that Cameron has woven the content of the film and its delivery method together so tightly. If this is the true future of visual entertainment media, as every studio head and electronics CEO would have you believe, it’s going to be a tough act to follow.