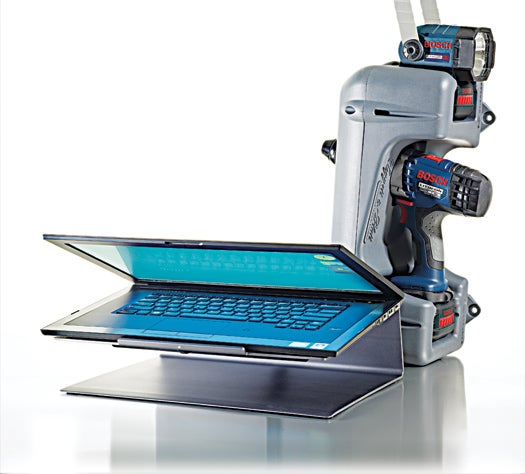 A table that automatically charges any laptop, gadget or even jigsaw that you place on it—that’s the promise of wireless power, and it just got one step closer. Magnetic induction systems, which transmit electricity without jacks and ports, have finally gone beyond the electric toothbrush into big, high-wattage gear. The new Dell Latitude Z laptop and a prototype Bosch drill power up while resting on specialized docks, which plug into the wall. The docks generate an electromagnetic field, which is picked up by a coil in the device, charging the battery. They can pass large amounts of current—up to 60 watts, compared with five or less for smaller gadgets—because they’re designed to prevent heat buildup. (The chips inside, made by eCoupled, continually adjust the power flow based on, for instance, whether the laptop is active.) Next up: The electronics industry is considering a standard for transmitters and receivers that could be built into many different devices and tabletops, eliminating docks once and for all. 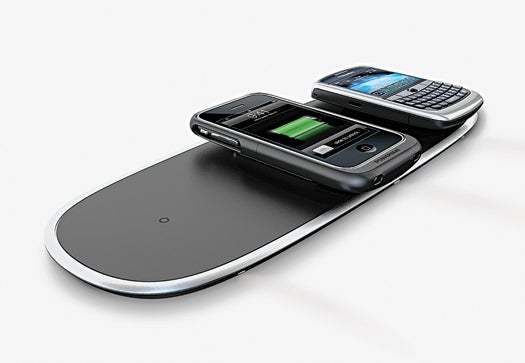 The Product: The Powermat (powermat.com) is the closest thing yet to a universal wireless charger. It uses magnetic induction, like the systems above, but you add its receivers to low-power gadgets that you already own. When you place up to three devices onto the mat (which itself plugs into the wall), radio-ID chips identify each gadget to send it the right amount of current.

The Test: I added a clip-on receiver to my Nintendo DSi, a case to my iPod Touch and a battery door to my BlackBerry. Then I set them on the mat.

The Results: My gadgets charged easily and about as quickly as with ordinary plugs. But the receivers add bulk, they’re available for only 10 or so small devices, and they made the DSi uncomfortable to hold. Given the expense—$100, plus about $30 per case—you might want to wait for products with built-in receivers.
—Steve Morgenstern