The Dissection: An Automotive Ignition Coil

How to make high voltage in a small package 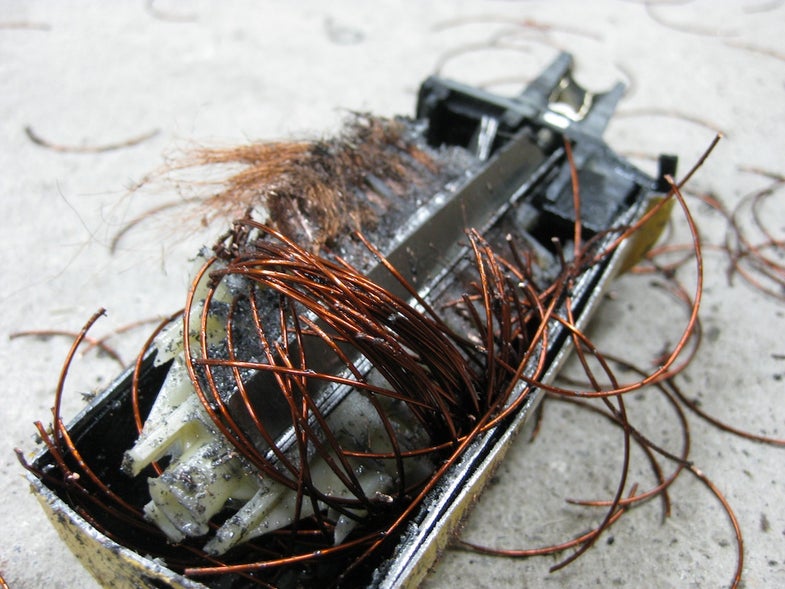 A close-up of one half of the ignition coil showing the coarse and fine windings that were contained within. Vin Marshall
SHARE

As I mentioned in an earlier post, I keep at least one Variac around at all times as a prop, should a sci-fi / horror movie erupt without warning in my shop. The Variac, besides looking like an electronic torture device, is a specialized type of autotransformer. An automotive ignition coil, the part under your hood that generates the super high voltage needed to fire the spark in a spark plug, is another. I cut one in half with a bandsaw to see how it works.

An automotive ignition coil is, at its most basic, a transformer whose job it is to take voltage from the battery and massively step it up before sending it to the spark plug. It’s an autotransformer; a type of a transformer in which there is only one winding, but with multiple taps for the primary and the secondary connections. When used as an automotive ignition coil, it’s paired with a capacitor to create a tuned R-L-C (resistor – inductor – capacitor) circuit. Think of this as the electrical equivalent of a spring with a weight on the end. Imagine the electrical energy in the ignition system oscillating back and forth between the coil (the inductor) and the capacitor just as the energy in the spring system goes from being stored in the spring to being potential energy against gravity and then back to the spring.

Just like the Variac, the key to the ignition coil is the fact that changing current in a wire will induce a changing magnetic field, and conversely, that a changing magnetic field will induce a voltage in a nearby wire. As the electrical energy oscillates between the ignition coil and the condenser (that bouncing spring), the current in the coil’s primary winding (the coarse wire in the picture) changes, creating and then collapsing a magnetic field. That field in turn induces a voltage in the secondary part of the coil (the very fine copper wire in the picture).

When I cut apart the coil, I noticed the winding was made up of both coarse and fine copper wire. As an autotransformer, the ignition coil only has one coil winding (with multiple taps that create the primary and secondary connections). Therefore, both the coarse and fine copper wire must all be part of the same contiguous winding. My thoughts upon seeing this were that the coarse wire makes up the portion of the winding between the connections for the primary, which will see relatively low voltage, but high current (high current needs a thick conductor). The fine wire makes up the part of the winding between the connections for the secondary, which will see a much higher voltage, but a lower current. The very helpful Bill Pasco, of Presolite Performance technical support (Prestolite manufactures Accel coils, like this ill-fated one) confirmed this for me. In addition, the ratio of the number of windings in the secondary to the primary part of the coil determines the ratio at which the voltage is stepped up from the primary to the secondary circuit. A spark plug needs a very high voltage, so the ignition coil needs a very high ratio. The finer wire used in the secondary portion of the winding thus makes sense not only from a cost standpoint (copper is expensive; any production design will use as little as it can get away with), but also from a space standpoint; all those windings need to fit into the fairly small coil.

Why is this high voltage important? Because in the presence of a high enough electric voltage, even conductors like air will experience what is known as dielectric breakdown and will conduct electricity, say, between the electrodes in the spark plug.

If all this sounds complicated, have a look at the insides of an ignition coil in the attached photo gallery and you’ll see it’s actually pretty simple—just a lot of copper. 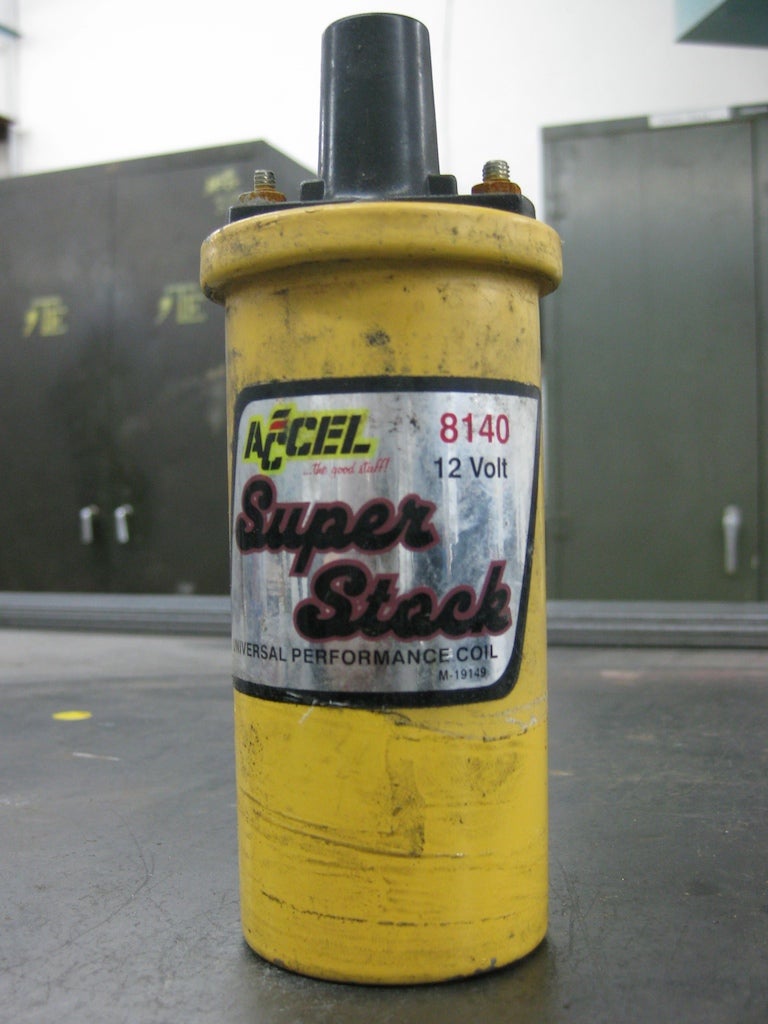 An automotive ignition coil. I’ve drilled a hole in the bottom and drained the oil in preparation for feeding this thing through a bandsaw. 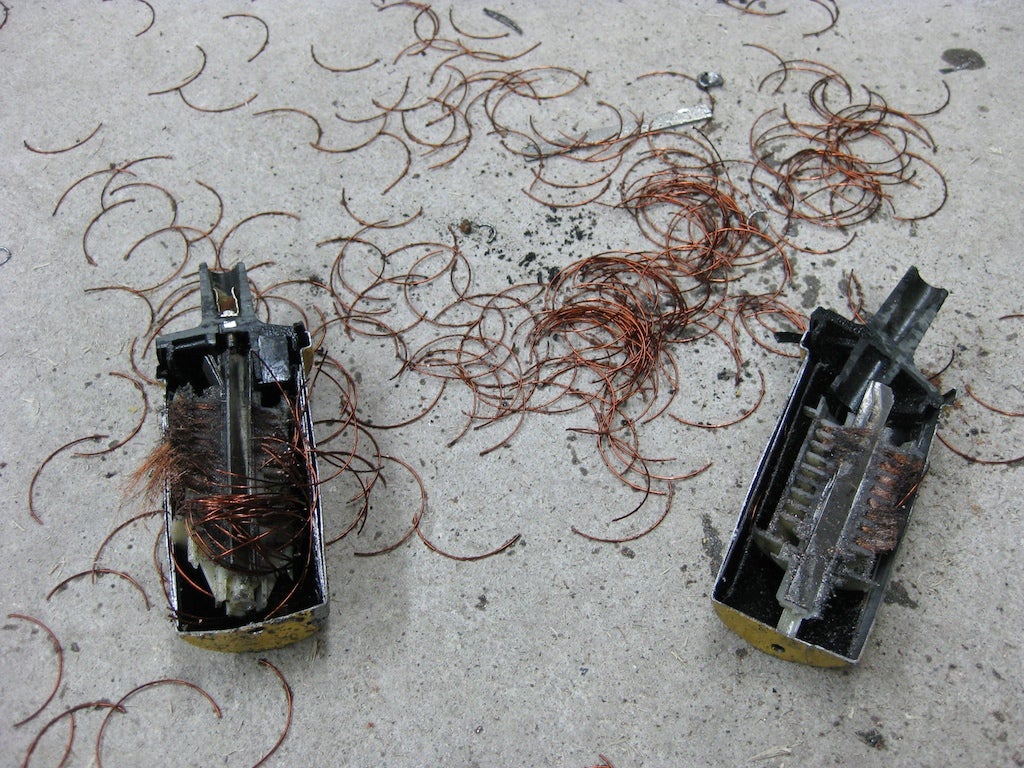 I was hoping to keep the halves a little bit more intact, but they kind of got away from me as I sliced the coil up with a port-a-band. Lying on the floor are the copper windings, cut in half. 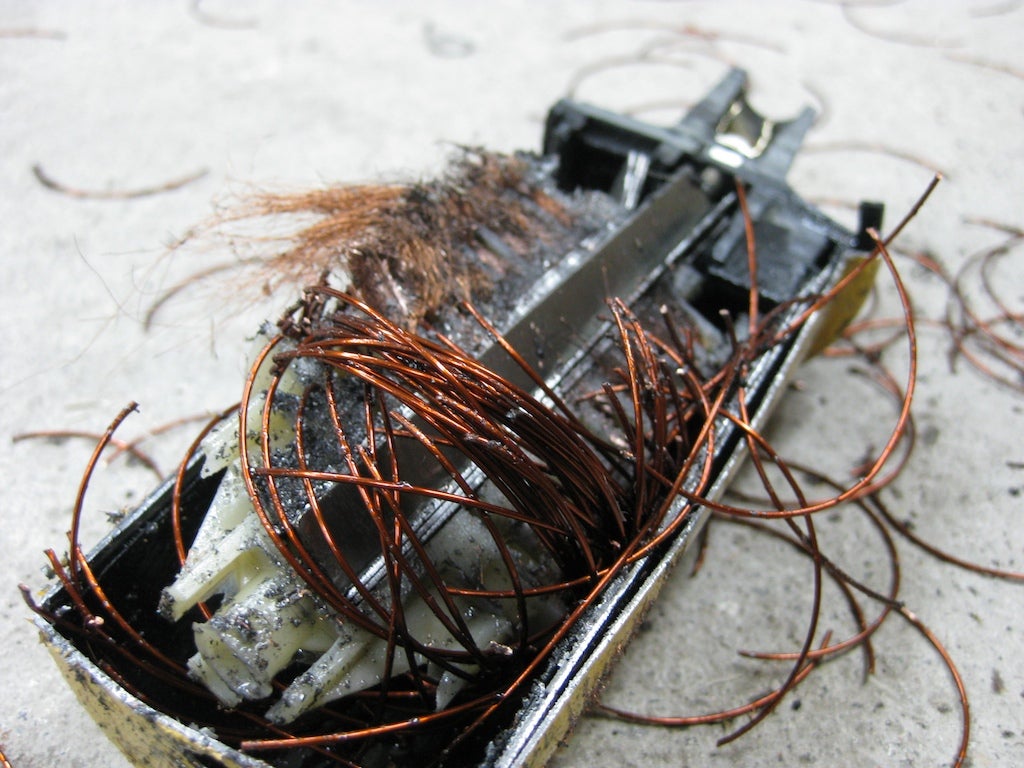 A close-up of one half of the ignition coil showing the coarse and fine windings that were contained within. 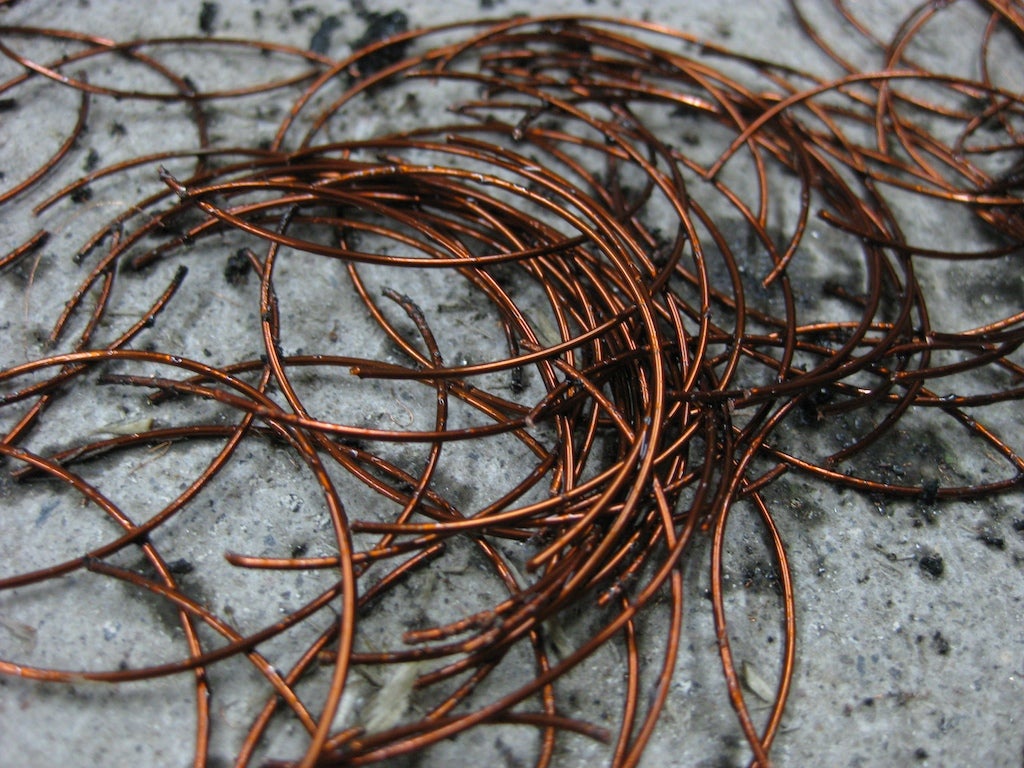 A closeup of the coils shows that the ignition coil contained a non-trivial amount of copper. 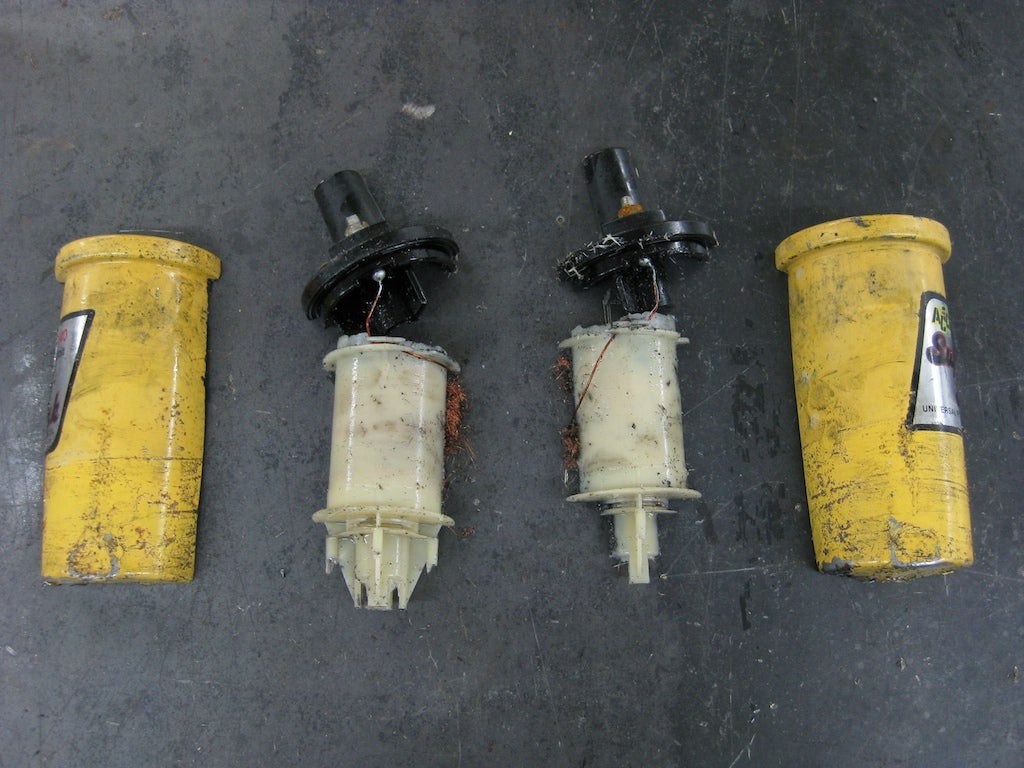 A familiar automotive ignition coil, cut in half. The light colored plastic parts in the center of the picture are the core around which the copper windings were wrapped.
Vehicles