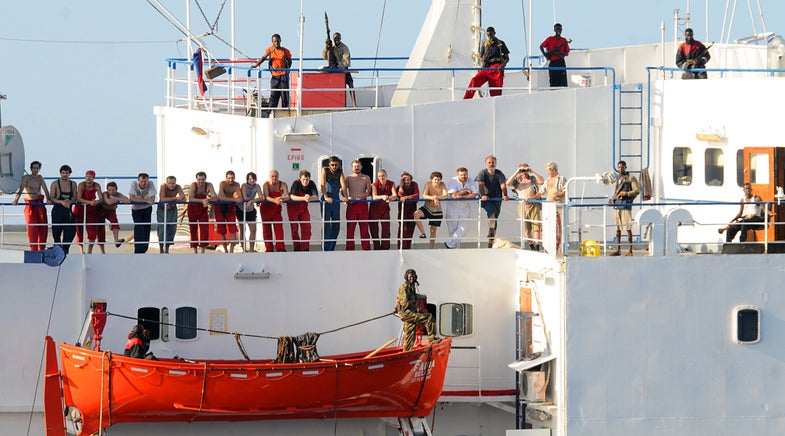 081109-N-1082Z-051 SOMALIA (Nov. 9, 2008) The crew of the merchant vessel MV Faina stand on the deck after a U.S. Navy request to check on their health and welfare. The Belize-flagged cargo ship owned and operated by Kaalbye Shipping, Ukraine, was seized by pirates Sept. 25 and forced to proceed to anchorage off the Somali Coast. The ship is carrying a cargo of Ukrainian T-72 tanks and related military equipment. (U.S. Navy photo by Mass communication Specialist 2nd Class Jason R. Zalasky/Released). MC2 Jason R. Zalasky
SHARE

Forget pirate radio, how about the pirate stock exchange? Somali pirates have created a stock exchange of sorts to fund their hijacking activities, Reuters reports.

The U.S. and other nations have committed naval warships and even aerial drones to the shipping lanes around the Indian Ocean and Gulf of Aden, but pirates from lawless Somalia have continued to attack ships at will.

Now even landlubber Somali civilians can invest in one of 72 “maritime companies” and hope that their favorite pirate band strikes it rich with the successful ransoming of a captured ship and crew. People don’t even need to invest cash – RPGs and other weapons also accepted at the main pirate lair of Haradheere.

One wealthy former pirate told Reuters that the stock exchange had won local support by making piracy into a “community activity,” which may underscore the root of the problem for nations seeking to battle piracy as a symptom.

Investing in piracy might evoke moral outrage similar to that which plagued early prediction markets. DARPA attempted to set up a prediction market in 2003 for intelligence experts to bet on certain events taking place, including terrorist attacks and assassinations, but had to shut down the operation after an angry Congress slammed it as a “sick” terrorism futures market.

Still, there’s a big difference between using a relatively closed prediction market to bet on certain outcomes for intelligence-gathering purposes, and investing directly in a group responsible for carrying out illegal activities such as piracy. And if a prediction market bets on more optimistic things, such as PopSci’s PPX, the moral element becomes a non-issue.

As for the pirate stock exchange, it seems like just another natural step for Somali communities that increasingly depend on illegal activities for economic subsistence. Somali pirates put a percentage of their ransom money back into their communities to pay for hospitals and public schools. Reuters quotes a woman who contributed a rocket-propelled grenade to one group of pirates and eagerly anticipates the dividends.

This suggests that all the high-powered Navy weapons or non-lethal gadgets in the world won’t solve that problem — much as we love our anti-pirate gadgets: