Avatar Review: We Have the Technology. Now What?

It’s an intriguing paradox–the success of a film as technologically elaborate and ambitious as James Cameron’s Avatar will come down... 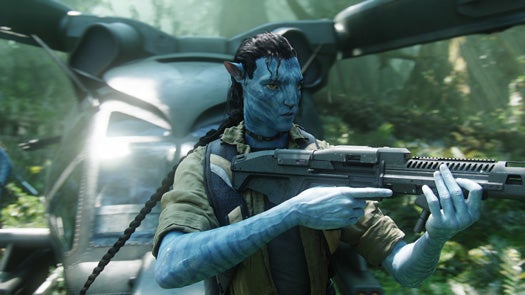 It’s an intriguing paradox–the success of a film as technologically elaborate and ambitious as James Cameron’s Avatar will come down to a simple question: Will audiences marvel at the movie’s groundbreaking production methods enough to forgive Cameron’s curious choice to frame everything on a script that is, almost above all else, obsessed with the evils of technology in the wrong hands?

Not only did Cameron wait more than a decade to make his more than $300 million passion project, but he spurred the invention of the cutting edge equipment to make his creation possible read our January issue’s feature on Avatar’s 3-D tech here. The construction of a new dual-lens 3-D shooting system and the development of an ever-improving motion capture and virtual camera system allowed Cameron to take his audience to the distant inhabited world of Pandora without compromising his ambitious vision for the place.

The film stars Sam Worthington as Jake Scully–a disabled corporate military veteran recruited to command a remotely controlled alien body–his avatar–in the hope of infiltrating Pandora’s native humanoid species, the Na’vi. At first, his mission is a peaceful one–intended to help negotiate a peaceful settlement between the natives and the human colonial settlers. The evil techno-corporate types came to Pandora to dig up a priceless natural element, Unobtanium. Curiously, the audience is never let in on what it does, but the villains need it and they’ll commit genocide to get it. Scully is the only hope to fend off what looks like unavoidable war.

Fortunately, he meets a Na’vi princess (Zoe Saldana) able to train him in the ways of her tribe. It’s only a matter of time before he falls in love with his new blue teacher–a love that leads him to question his allegiance.

The soulless keepers of the bullets and bulldozers are led by Colonel Miles Quaritch (Stephen Lang), a one-dimensional, cliche-spouting parody of a modern Marine. If adventure films are as good as their villains, Avatar falls woefully short.

There’s no point to investing too much more on plot “spoilers.” Suffice to say, anyone who’s seen Dances with Wolves, The Last Samurai, A Man Called Horse, Soldier, Pocohantas, Enemy Mine, or a host of other outsider stories should be able to call every plot point Avatar offers. In fact, it’s astounding how similar Avatar‘s plot plays when compared to Kevin Costner’s Oscar-winning Wolves.

But no such lack of creativity plagues the film’s action sequences, art design and 3-D effects. Every penny Cameron left unspent on story development poured into the film’s richly detailed world. And the details are essential as the high-def 3-D is ultimately unforgiving.

Unlike traditional 3-D techniques that allowed foreground objects “extend” out toward the audience’s perspective, Avatar‘s image offers depth between the focused foreground and the surrounding environment. The battle scenes are packed with rapidly moving visual pieces–almost to the point of incoherence. But the 3-D invites the eye to roam the frame for its element of choice.

The CG characters are painstakingly rendered, but movie magic makers still haven’t found a way to make CG players look less like finely drawn cartoon characters. When CG-dominated films can create onscreen creatures indistinguishable from real-world humans and animals (without toeing the uncanny valley), a wall will come down. For this reason, Avatar remains visually impressive but not as groundbreaking as, say, George Lucas’ Star Wars, which pushed traditional special effects techniques to the next level.

Unlike Lucas’ more playful science fiction epic, Cameron reaches for a heavy environmental message. Avatar is every militant global warming supporter’s dream come true as the invading, technology-worshiping, environment-ravaging humans are set upon by an angry planet and its noble inhabitants. But the film’s message suffers mightily under the weight of mind-boggling hypocrisy. Cameron’s story clearly curses the proliferation of human technology. In Avatar, the science and machinery of humankind leads to soulless violence and destruction. It only serves to pollute the primitive but pristine paradise of Pandora.

Of course, without centuries of development in science and technology, the film putting forth this simple-minded, self-loathing worldview wouldn’t exist. You’d imagine Cameron himself would be bored to tears on the planet he created.
There are no movies on Pandora, so he’d be out of a job. The Na’vi rarely visit a multiplex. They sit around their glowing trees, chanting; they don’t build and sink titanic ocean liners, and they don’t construct deep-sea mini-subs enabling certain filmmakers to spend countless days exploring said cruise ships.

Even with this confused message, Avatar should make a healthy profit. International audiences love spectacle, and Cameron lathers it lustily into his comeback project. But, he (and 20th Century Fox) better hope those same audiences don’t think too much on the way out of the theater lest bad word of mouth does more damage to Pandora than the corporate marines.