The B-21 bomber won’t need a drone escort, thank you very much

The Air Force's next-gen stealth bomber will be flying solo. Here's why. 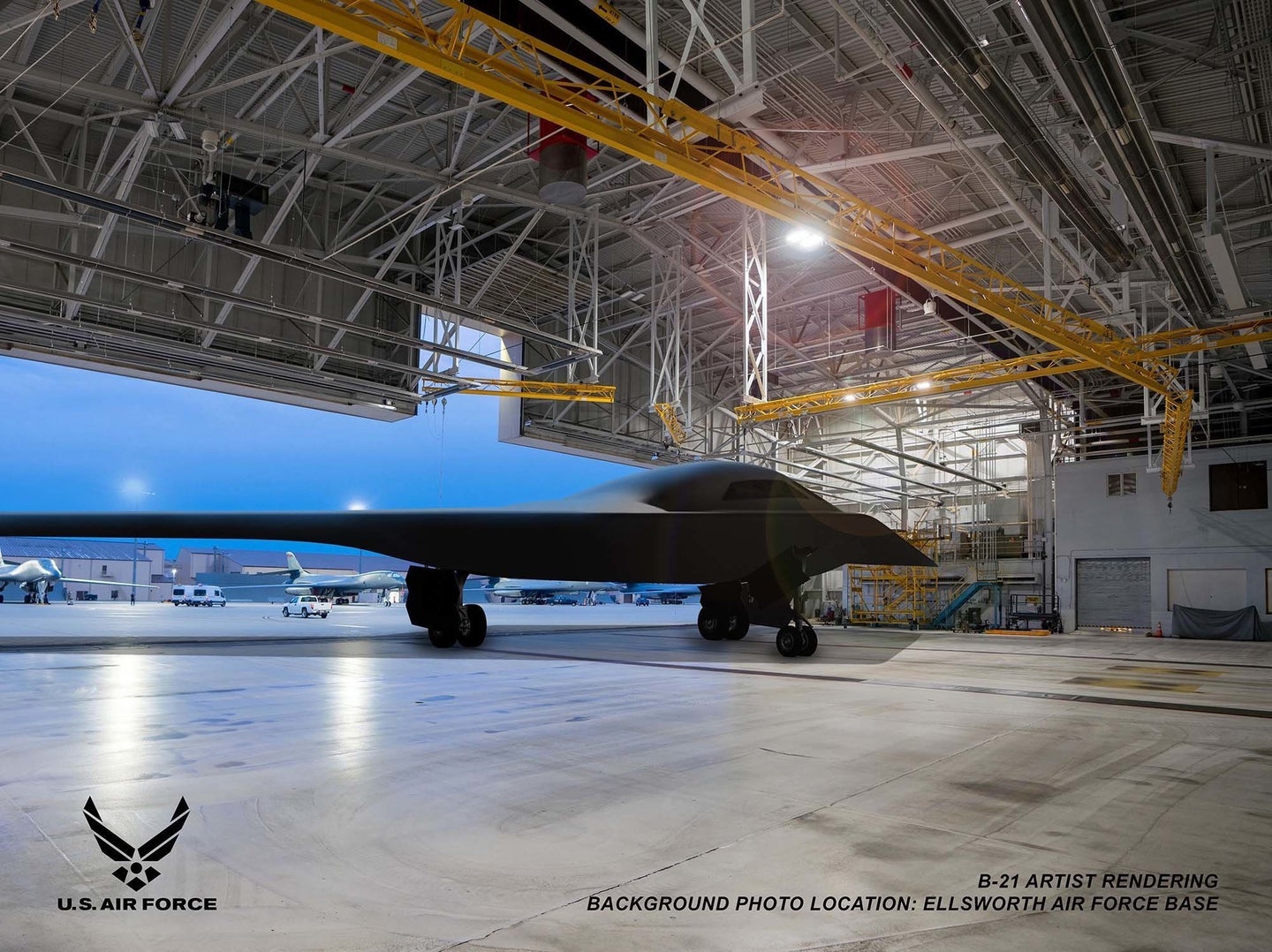 The B-21 will eventually replace the B-2. US Air Force
SHARE

When the new B-21—the Air Force’s next-gen stealth bomber—goes to war, it will do so without a drone escort. The news, broken by Breaking Defense on July 16, is a sharp reversal from earlier plans that had included developing a drone fighter that could travel alongside the bomber and protect it.

The story of the planned and then abandoned drone escort is a smaller part of the broader story about the B-21, the first new bomber developed by the United States in 30 years, and the first one developed entirely after the Cold War.

News of the cancellation of the drone escort came at the Royal International Air Tattoo, a massive military air show held in England every July.

“The idea of a similar range collaborative combat aircraft is not turning out to be cost effective, so it looks like we’re not going to go that direction,” Air Force Secretary Frank Kendall told Breaking Defense in an interview at the event. Kendall had previously announced the possible drone escort in December 2021, with the intention of the drone fighters being a budget item for 2023.

Abandoning the concept of a fighter escort, even an uncrewed one, for the new bomber is part of the long history of failed attempts to protect bombers en route. Three separate but related programs are key to understanding the impact of this cancellation: the B-21 itself, escort fighters, and the Loyal Wingman drone fighter program.

The B-21 Raider began its history as the Long Range Strike Bomber. Rebranded the B-21, and with its “Raider” name stemming from the Army Air Force’s 1942 raid on Tokyo, the aircraft will be the fourth bomber in service with the Air Force. These include the ancient B-52 bombers, which have fought in every US war since Vietnam, the supersonic B-1 bombers, which entered service in 1986, and the stealth B-2 bombers, which first saw combat in the Kosovo War in 1999. The B-21 will be closest in conceit to the B-2.

Those bombers all represent a range of abilities and design eras. While all were built to carry both conventional and nuclear weapons, today only the B-2 and B-52 do so. Nuclear capability was engineered out of B-1 bombers in upgrades done as part of arms control limits on total nuclear-capable bombers.

Early in the development of the Long Range Strike Bomber, the Air Force explored the possibility that the bomber could fly uncrewed, though that notion was roundly rejected for nuclear missions, and probably for other bombing runs, too.

As designed, the B-21 will be a stealth long-range bomber capable of carrying both conventional bombs and nuclear weapons. Long-range in this sense is intercontinental: the B-1 can fly almost 6,000 miles with a useful payload, while the B-2 can reach nearly 7,000 miles, and the B-52 can fly close to 9,000 miles. (Air refueling helps.) To replace existing bombers and accommodate planned future need, the Air Force is requesting that a minimum of 100 B-21s be built, with construction on the first six B-21s underway as of February 2022. (It has not yet flown.)

For countries that want to protect against bombers, the weapons they have historically turned to are anti-air missiles and fighter aircraft. Stealth features, which the B-2 was built around and the B-21 will incorporate as well, make it harder for sensors like radar to detect and track a plane, limiting the danger from anti-air missiles.

Fighter jets that can intercept and attack bombers are a hard threat to mitigate. In World War II, bombers, especially the “Fortress” line of which the B-52 is still a part, adopted on-board guns to shoot fighters. (The B-52’s tail guns saw use in Vietnam, but the guns were removed in October 1991, while the gun’s rear-facing radar systems were retained.) That defense strategy struggles against the threat of long-range anti-air missiles and especially at the high speeds of jet combat, which is where the possibility of an escort fighter is appealing.

An escort fighter is one designed to fly alongside bombers and, in the event of interception, protect the bombers from the hostile fighters. A variant of escort is the “parasite” fighter, which rides attached to or inside a bigger plane, waiting to be released when needed. While the parasite fighters save on fuel, carrying one reduces a bomber’s effective payload and also requires the difficult task of landing a fighter back on a plane after the bombing is done. DARPA is exploring cargo planes that can launch drones, for a similar effect, but without having to worry about a pilot on board or their safety after the mission.

If the escort is to fly alongside the bomber, then, it needs to have the same range as the bomber, while still being in a small enough airframe to be useful and maneuverable as a fighter when it falls under attack. Removing the pilot from a cockpit saves some room in a fighter escort, but the plane would still need to carry enough fuel for an intercontinental journey, enough sensors and weapons to fight, and if the drone is designed for repeat use, enough fuel to carry it back afterwards. That is a tall ask, especially when crewed fighters like the F-16 Fighting Falcon have a one-way travel range of just over 2,000 miles, and a shorter combat effective range.

Mid-air refueling can extend the range of both bombers and fighters, but it would be another hurdle for a long-distance drone escort fighter. Before adding “autonomous mid-air refueling” to the list of tasks for a drone, it is likely the Air Force will want to try a shorter-range drone fighter first.

The Air Force is already working on a drone fighter of sorts, just not one built for the great distances of bomber flights. The Kratos Valkyrie, part of the Air Force’s “loyal wingman” program, is a drone designed as a relatively inexpensive complement to fighter squadrons.  And Skyborg, another Air Force program to create an autonomous pilot for aircraft, is an effort to enable uncrewed planes to fly alongside crewed craft.

These drones are designed to fly alongside fighters crewed by pilots, with the autonomous system of the drones possibly carrying out tasks like flying ahead. By keeping extra sensors and possibly even weapons in the loyal wingmates, pilots of expensive fighters like the F-35 could send drones in for riskier missions, like scouting and attacking hostile surface-to-air missile sites.

Even as the prospect of a drone fighter escort for bombers is unlikely, the loyal wingman program remains a priority for the Air Force. The Air Force is still developing drones that can fly and fight alongside crewed planes, even if they are not yet bomber escorts. For now, the B-21 will have to rely on stealth and speed to keep it safe.