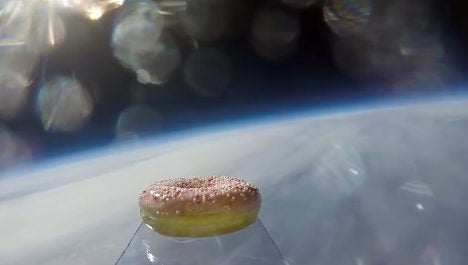 Last week will go down in history as the first time a doughnut was ever launched into space.

Alexander and Benjamin Jönsson and their friends launched their sprinkled spaceship from Askim, Norway. Using a weather balloon, the brothers sent the sugary snack and an onboard camera 32 kilometers above Earth. Like other weather-balloon-powered launches we’ve seen, it didn’t technically reach outer space – an altitude of 32 kilometers is still within the stratosphere. That’s still pretty high for a pastry, though.

If your first question to this sweet experiment is “Why?,” then Alexander has an answer for you.

“I’m really into space and photography, and I used to play around with weather balloons back in school. Then we had the idea that we should send something really crazy up into space and thought, ‘Hey, nobody has ever sent a doughnut up before,'” Alexander told The Local, a Swedish news outlet.

He adds, “We like to do odd things, and this felt very different. It was really fun to watch the video for the first time. We could see the doughnut hovering above the Earth.”

The brothers are from Lysekil, Sweden, but they crossed the Norwegian border for their mission because it was cheaper to obtain flying permits there. The Swedish Sea Rescue Society recovered the soggy treat a few hours later after it crash-landed in Sweden’s Lake Vättern. The Jönssons posted their video on social media and were soon overwhelmed by their YouTube celebrity status.

“Loads of people have been in touch about it, and there’s been a lot of media interest too. Things have been a bit all over the place,” said Alexander.

As far as what’s next for these NASA scientists of the pastry world, the Jönssons are trying to come up with a way to top this stunt.

“We’ve been kicking around various ideas. We’re thinking of going to the United States in 2017 when they will have a total solar eclipse to send up a weather balloon. But the thing is, how do you top a doughnut?”