Can 3D-Printing Help The Refugee Crisis?

A startup based in Jordan is finding out 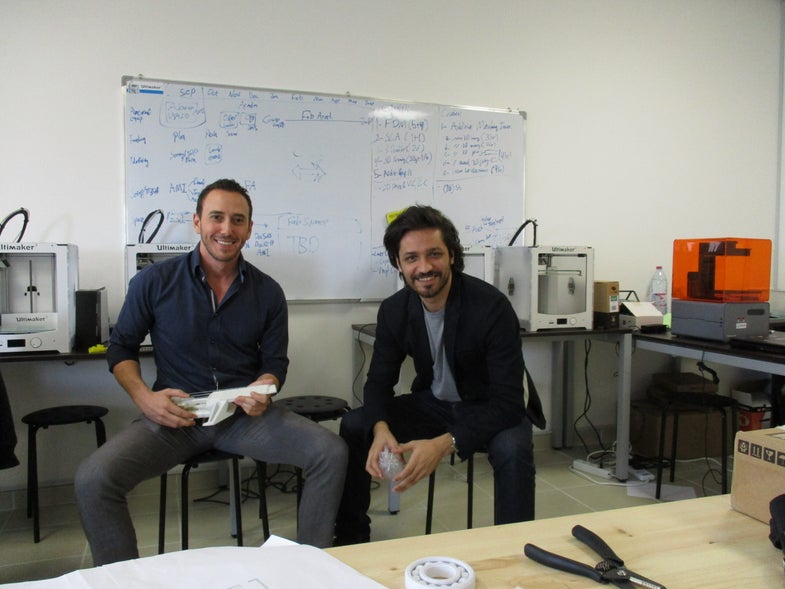 On face value, Dave Levin and Loay Malahmeh are creating a makerspace and innovation center for refugees, but their real goal is much more ambitious. “Much of what we’re doing is trying to disrupt the whole nature of humanitarian relief, of civil defense, perhaps of warfare itself,” said Levin.

Levin and Malahmeh are on top of a non-profit network of technologists, aid workers, and entrepreneurs that are trying to hack some of the challenges Syrians, inside and outside of conflict zones, encounter every day, from connecting to the internet to fighting barrel bombs. The consortium, “Refugee Open Ware (ROW),” ties together several different initiatives and groups and has received political, financial, and technological support from numerous diverse backers, everyone from a particle physicist at CERN to even the Royal Hashemite Court (the leadership of Jordan).

Manufacturing tools were strewn across Levin and Malahmeh’s small makerspace in Amman, Jordan when I visited late last year. One of a dozen 3D printers was buzzing, left on overnight to print a part. On a table there was a Raspberry Pi, a soldering iron, and printer components. Against one wall were shelves holding all kinds of polymers, against another a series of prosthetic hands and a model of a heart. On the table were plans for their 500 square meter innovation center, which was below our feet. At the time it was empty, but is now being filled to eventually become FabLab Amman, a space where anyone can try and make their own technology.

The Amman innovation center will act as a training hub for both locals and refugees to solve their own problems with some heavy ideas behind it. Anyone can use it – students, professors, refugees, and entrepreneurs already have.

“The whole idea with the democratization of production, which is the main characteristic of the next industrial revolution, is that anyone can get access to these advanced manufacturing tools,” Levin said. He wants to use spaces like these to create technological solutions to alleviate the pain and suffering caused by the Syrian conflict.

The biggest killer in Syria has been bombing by the military of Syrian President Bashar al-Assad and his allies, and ROW is developing technology to alleviate suffering across several levels of humanitarian relief — from emergency relief to refugee camps to resettlement.

Take, for example, the recent example of a Russian airstrike. Before any survivors could be taken from the rubble, fires needed to be put out and a first-responder was left with crude tools to do so.

“A guy came out with a water tank and a garden hose,” said Levin, who explained that the first responder had to pinch the hose with his thumb to get a strong enough stream.

Syrians have access to many basic components: hoses, wires, computers, generators, and industrial equipment. Many of these simple tools can be modified—with the right know-how—into effective life saving devices.

This particular example has two proposed approaches. One was to hack a solution: figure out how to modify a liquid petroleum gas (LPG) tank to hold water pressure using only parts available in Syria, then import the knowhow.

When I heard this, I made the comparison to the scene in Apollo 13, when Houston has to take available resources and jimmy up a carbon dioxide filter.

“It’s exactly like that,” Levin said laughing. “It’s what everybody has been saying.”

Another, similar approach would be to pinpoint a key part, like a nozzle, and 3D-print it. With manufacturing tools inside of Syria, ROW can provide technologies inside the warzone. If all but one of the requisite parts for, let’s say, a jaws of life machine were available inside the country, it could be developed abroad and brought in. This means ROW would reduce the costs of logistics immensely, both because of the efforts that go into procurement, and the ability for custom solutions that would otherwise be more costly. This is especially true for a place where checkpoints and areas of control change weekly.

Because Bashar al-Assad’s strategy is to kill civilians and create threats strong enough to depopulate entire districts of urban Syria, just saving lives presents a threat to his generals’ own savage rendering of counter-insurgency. In fact, the pair speak cautiously about what their strategies and solutions are for this exact reason, and ROW will more closely control access to its Rescue Technology Incubator it is building in Istanbul due to security concerns.

And in some cases, those bombs don’t explode and force people out. Unexploded Ordinance (UXO) will be an issue in Syria for many years to come. ROW has both high- and low-tech solutions for this in development. The (relatively) low-tech approach is to quickly 3D print replicas of known UXO, while the high tech solution is a computer vision app that can “see” what kind of ordinance it is and advise rescuers on how to disarm it.

If Syrians are maimed by the war, there are solutions too. There’s their prototype of a cheap echolocation device that allows the visually impaired to navigate their homes, as well as 3D printed prosthetics that custom fit, specialized for occupation, and cost less. They’ve partnered with National Syrian Project for Prosthetic Limbs (NSPPL), the largest provider of free prosthetics for the tens of thousands of Syrian amputees.

And ROW will be there for Syrians that have made the difficult choice to leave their homes, too. There’s the idea to network inside a refugee camp, enabling fire detection and monitoring of services; assisting in connecting Outernet, which allows connectivity in a place where cell phone service is overloaded by bypassing 3G and ADSL signals using satellite dishes.

Levin and Malahmeh both had wanted to start a pilot program printing prosthetics for refugees and were eventually connected by an open-source community for 3D-printed prosthetics. Levin showed up at Malahmeh’s office with a printer on his back, and soon a refugee, Asem, printed a custom piece of his prosthetic foot for a fraction of the time and cost that finding an alternative would have.

“The momentum that came out of Asem was really impressive,” Malahmeh said. They asked If Asem could learn how to print a foot for himself, what would happen if hundreds were able to innovate for themselves or others? They are launching a research and development center in Istanbul, the innovation center in an Amman tech hub, a prostheses center in Jordan’s premier medical facility, and, most ambitiously, the goal is to launch a fabrication lab in Zaatari Refugee Camp, where just under 80,000 people live.

But in scaling up they’ve run into problems. Jordanian security services have rejected the necessary approvals to set up FabLab Zaatari. “One has to expect a great deal of caution,” Levin said. And a lot of people don’t understand what they are trying to do without visiting their makers’ space in Amman.

Their next steps are to fill their two other spaces with experts and production equipment: one in Amman, and another in the northern city of Irbid near Zaatari. They’ve received support from the highest levels of the Jordanian government, including the Royal Hashemite Court and the King Hussein Business Park, which provided them with the space for the lab.

Levin and Malahmeh come at the project from two different business backgrounds: Malahmeh worked for a leading Jordanian social media startup and is an expert is digital marketing, and developed strategies for several Fortune 500 companies. Levin worked in consulting and in the impact investing world. Private investment and philanthropy make up the most of funding, with some large investments from the EU and USAID.

But their talk sounds more like a nimble techno-syndicate than a startup or even a lefty tech-fund. They talk about decentralizing the means of production, and disrupting humanitarian aid at a time when donors and stakeholders want to see income statements.

“Nowadays you start a non-profit and everybody wants to see what your revenue model is,” says Levin. “And when you’re producing really cutting edge technology for amputees of the Syrian conflict, how do you expect to have a revenue model from day one? Or even in year five?”

That timeline is important too. Even if the horrors of the Syrian war, and its spillover into its neighbors, make a turn for the better, the project has staying power and looks far off into the future. They’re working with a global community of humanitarian hacktivists, for lack of a better word. They hope they can easily scale into other conflict zones, and are pushing for FabLabs for refugees in Europe. In Philadelphia, NextFab, another partner in ROW, hosted the Humanitarian Rescue Tech Hackathon. Teams there devised plans for drone delivery of goods. In Barcelona, Fab Labs are focusing on prosthetics. And they are hoping more people join in.

“We’re looking for our real visionary leaders who have seen enough kids had their legs blown off by barrel bombs. Those that are frustrated by the traditional processes that are going to address challenges in the region and challenges of conflict,” said Levin.

The network has allowed them to leverage the agility of collaboration against the bureaucracy that goes into building these kind of spaces and to bring on interested parties. They’re looking for engineers, data scientists, and software and web developers. And, people can donate on their website.

“We learned a lot from the beginning,” says Malahmeh. “And just now we are getting physical traction.”

Correction and editor’s note: This article originally incorrectly spelled Malahmeh’s name as “Malameh.” Verb tense of several written statements by the author has also been altered to clarify projects that are in progress, not yet complete, or planned for the future. The preferred reference to the Jordanian leadership has also been included.