CES 2015: Avegant’s Virtual Reality Headset Is Actually Something You Might Wear

Or at least wearing it shouldn't start any bar fights 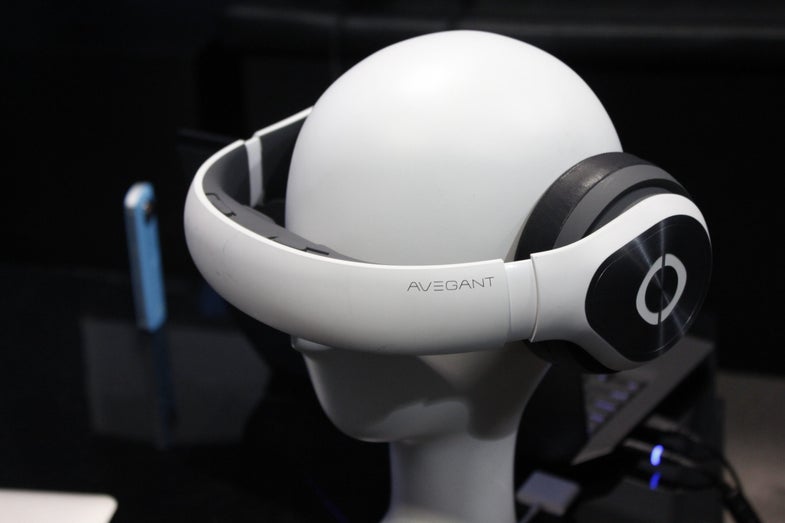 At first glance, Avegant’s Glyph looks like a sizable pair of headphones you might see on any young urbanite. It’s only upon closer examination that you see what sets it apart. Within its connecting band are two eyeholes that allow users to watch videos anywhere they please. You see, the Glyph is actually a virtual reality headset in disguise.

Well kind of. The Glyph isn’t specifically geared towards VR. Unlike the Oculus Rift or Razer’s OSVR, the Glyph gives users the option to view any movie, TV show, or other piece of media at any time; simply hook the Glyph up to your smartphone, tablet, or gaming console, and the video appears right before your eyes. Plus, it accomplishes this without the use of screens. Instead, the Glyph uses a Virtual Retinal Display — a series of micromirrors and optics that transmit light directly onto the viewer’s retina. The result is a moving image that looks somewhat like a large movie screen located 8 feet away from you.

The Glyph doesn’t scream “VR headset,” which may be crucial for it to succeed as a VR headset.

Yet the Glyph is compatible with VR if you want it to be. The headset has head-tracking capabilities, meaning you can turn your head left and right within a 360-degree environment. Plus, it supports any standardized VR media made for other headsets. However, CEO Edward Tang says the Glyph isn’t completely about immersion. It’s more for the traveler who is wary of looking at his or her tiny smartphone screen to watch a movie or video clip while in transit. You can wear the Glyph as headphones on a bus or plane, and then when you want to watch something, simply tilt the band down in front of your eyes.

Avegant’s original version of the Glyph was a bit clunky, but their most recent model, showcased at this year’s CES, looks like a product that people already wear today. While other headsets may gives users a much more immersive experience, most aren’t ideal for wearing out in public (and some even provoke the ire of people nearby). The Glyph doesn’t scream “VR headset,” which may be crucial for it to succeed as a VR headset.

Customers can pre-order the Glyph for $499 through the end of January, at which point the price goes up to $599. Those who pre-order can expect to get their headset in the fall of 2015.