The Kickstarter-funded Oculus Rift reminds us that virtual reality can be truly mind-blowing. 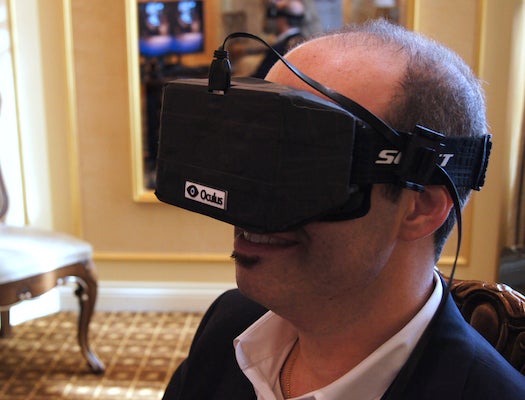 Virtual reality sounds almost quaint in these days of OLEDs and 4K and the Kinect and glasses-free 3-D and all the other amazing ways we have now to experience and interact with games. But it’s back in a very, very big way with the Oculus Rift, which I tested out today here at CES in Las Vegas.

Oculus started out as a hobbyist project from one Palmer Luckey–just a guy with an idea, taking apart smartphones and making what turned out to be a predecessor to the Oculus Rift. Luckey posted about his project on a forum, where it was found by gaming legend John Carmack, creator of Doom, Quake, Wolfenstein 3D and more. Carmack asked Luckey for a test unit, loved it, and became its biggest cheerleader, bringing it out on stage at the E3 gaming convention and even assisting with the development process. Then it landed on Kickstarter, where it made boatloads of money, and now it’s here.

The unit I tested was a prototype; the screen, notably, was not the final screen that’ll be used, and the team is working very hard to eliminate the (very minor) latency I experienced. The design, too, is a bit different. But what was so surprising and impressive about the Oculus Rift is that the thing actually works. 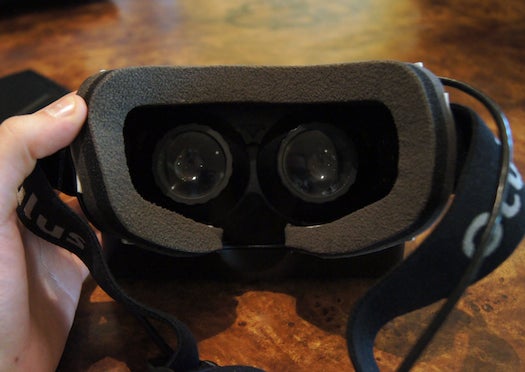 The Rift looks like a pair of ski goggles, more than anything else. Inside are two lenses, one for each eye, pointing at a single LCD display. (The final screen will be a 7-incher; the one I tested was 5.6 inches.) The screen delivers two separate images, one to each eye, so you get stereoscopic 3-D. Here’s where it gets amazing: there are sensors in the goggles–accelerometer, gyroscope, that kind of thing–that are keyed into PC games. You turn your head and your vision moves just about perfectly with it–360 degrees around, plus all the way up and all the way down. It is, by far, the most immersive interactive experience I have ever seen.

The Rift works (and will work) like a peripheral: you’ll plug it into your computer and play PC games with it. It requires a pretty beefy gaming PC at the moment, but it’s still a little ways off, so by the time it’s released, its requirements will be less pricey. And the Oculus team is very concerned with creating a product that everyone can use, not just the folks with $3,000 liquid-cooled gaming PCs.

I played a game in which I was walking around a kind of medieval castle scene. I used an Xbox controller to move forward and backward–you stay seated while using the Rift–and turned by turning my head. It’s impossible to really get across how world-shifting the Rift is; it’s exactly like we’d dreamed virtual reality would be. You put on these goggles and you slip into a completely new world, in which your body movements respond pretty much the way they would in the real world. It’s comfortable, too, and not particularly heavy, which I was worried about. Feels mostly like ski goggles.

The only problem I found was a tendency to move the rest of my body and not just the headset. If you lean to see around a corner, for example, which I did instinctively several times, the headset can’t translate that into in-game movement. (The Oculus team noted that they’re aware of this and plan on tackling it, though they wouldn’t say quite how.) Then there’s the issue of motion sickness, which is not a term Oculus uses–they prefer “disorientation”–but is real all the same. It’s a little hard to tell if my nausea was caused by the Rift or by the fact that I was up until 3:30 AM playing poker, but the human body’s interaction with such a complete perception replacement is not something to be taken lightly, I think. I suspect some people will react more poorly than others. 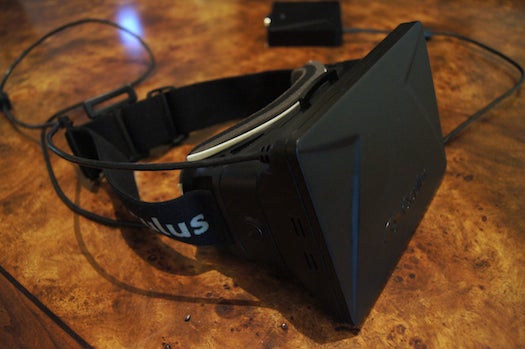 This is more what the final development kit will look like; the version I tested was more operational, but not final in appearance.

The distribution of games is also kind of a question mark, though that’s not necessarily a bad thing. The Rift isn’t a new kind of gamepad; it’s an entirely new medium, a new way to experience games, and though ports are sort of possible and will definitely be released, that’s not really what the Rift is made for. Sure, Call of Duty would be fun, but it’s going to take a lot of development work to get new games out that really take advantage of this amazing hardware, not unlike what happened with the Microsoft Kinect. But John Carmack’s involvement will help with that, and I think pretty much any developer that sees this thing will want to create amazing new stuff for it. Development kits are going out in March, so that work should start pretty soon, and the company is hoping to have consumer products out in the near future–like, this isn’t a pie in the sky thing, this could well see release in 2014. Oculus tells me they’re aiming for around a $300 price point, which is fair.

The Rift is certainly one of the most amazing things I’ve seen at CES this year–hell, in any year. It’s not really possible to describe what it’s like to use it, but as soon as I put the goggles on and turned my head, I think my mouth dropped. It’s flat-out awesome.