Studying organisms like the body-regenerating sea slugs can teach us about how plants evolved. 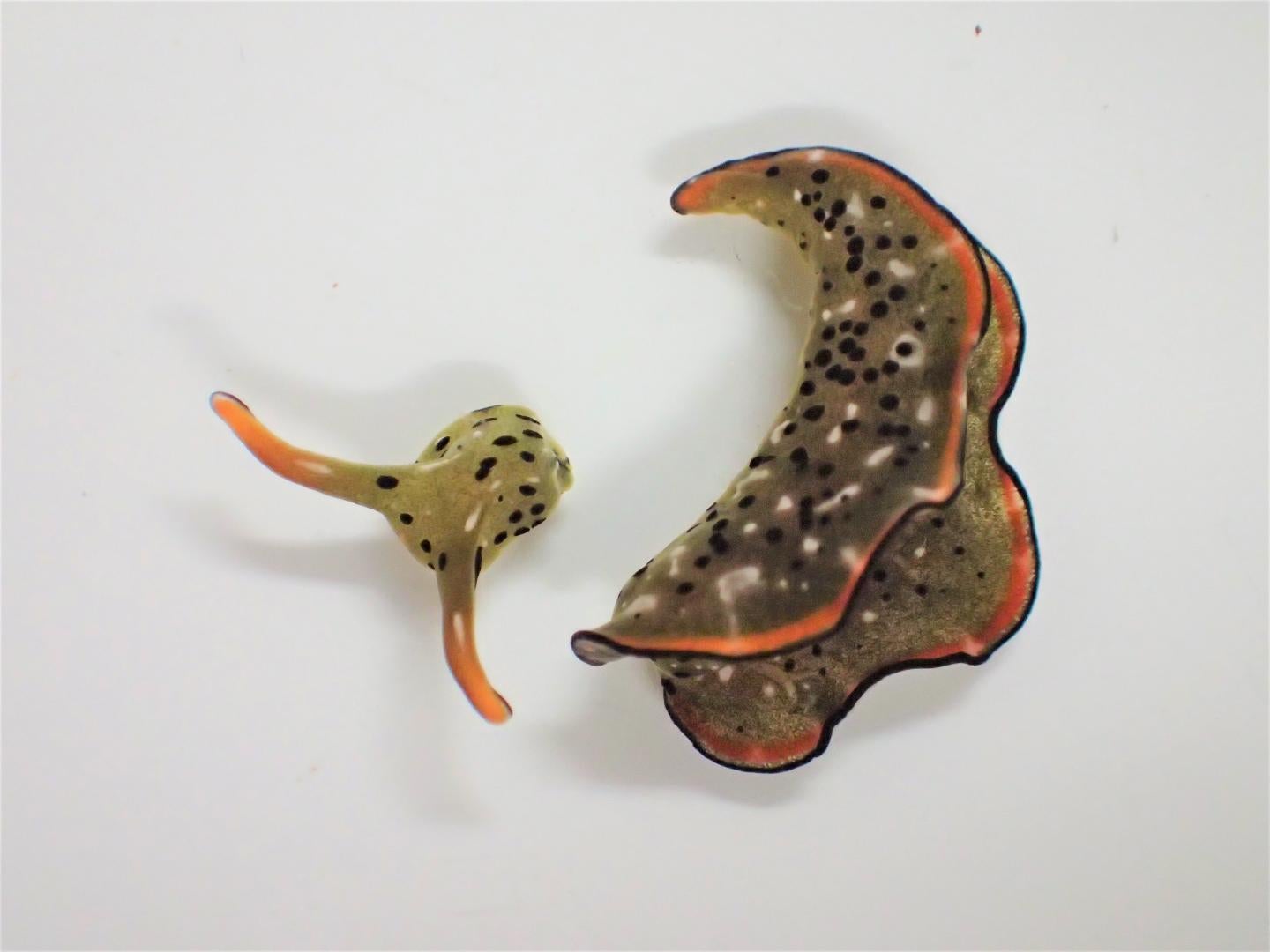 Kleptoplasty, the ability to steal another organism's photosynthetic powers, in animals is thought to be extremely rare in animals. Its this skill that allows the slug pictured above to survive and regrow its body after being decapitated. Sayaka Mitoh
SHARE

Some sea slugs can live without their bodies. Cut their heads off, and the noggins can still survive for months, scientists recently discovered. Those detached, self-propelling heads can then regenerate whole new slug-bodies for them.

Scientists don’t really know how those slugs manage it, but there are at least two species of a group called sacoglossans who can do it. They suspect the slugs’ astounding survival powers depend on a backup power source: The animals can steal the photosynthesizing powers from the algae around them.

This ability is known as kleptoplasty, and slugs aren’t the only ones that possess it. Numerous other life-forms are kleptoplastic, capable of pillaging chloroplasts—the parts of a cell that facilitate photosynthesis—from other organisms, such as algae in water. Kleptoplastic organisms can take those chloroplasts and use them as their own.

The consumed chloroplasts continue to turn sunlight into energy for their new organism, giving them a “long-lasting bonus,” says Holly Moeller, a biologist at the University of California at Santa Barbara. “Their food supply could have this whole second life.”

Those kleptoplastic sacoglossans, for instance, suck out the innards from algal cells they consume, singling out the chloroplasts and merging them into the slugs’ digestive cells. That allows the slugs to directly turn sunlight into energy of their own accord.

Kleptoplasty may seem like a magic wand for survival, but scientists don’t know if it’s quite that. Chloroplast-raiding probably doesn’t give a slug enough energy to replace eating. Rather, it’s more like a backup plan. If, for instance, the slug has been decapitated or food is scarce, the animal can rely on its pillaged chloroplasts.

Kleptoplasty in animals is far from the norm. In fact, for many years, those sacoglossans were the only animals that scientists knew were kleptoplastic. That is, until scientists in 2019 discovered kleptoplasty in rhabdocoels, a genus of flatworms.

For decades, scientists had known some freshwater rhabdocels kept living algae in their bodies, something that a few other animals, like corals and sponges, are known to do. Scientists had also found chloroplasts in several species of rhabdocels who lived in the sea, according to Niels Van Steenkiste, a biologist at the University of British Columbia.

Van Steenkiste and his fellow researchers decided to look at one of those species more closely to find out if they, too, held full algal cells. Using high-resolution microscopes and gene sequencing, they found that the flatworm species had instead taken stolen chloroplasts into themselves.

How these rhabdocels manage to actually break into the cell and raid its contents isn’t known, nor is it known if the flatworms are picky raiders. These are both open questions of research. “We want to find out if they only graze on specific species,” Van Steenkiste says, “or if they feed non-specifically.”

And the discovery doesn’t make kleptoplasty in animals any more common. Van Steenkiste says that he and his colleagues have confirmed it in two species of rhabdocels so far, but there are as many as 16 other species that they think likely also have it. That’s still a tiny fraction of the 1,800 known species of rhabdocels in the world.

Of course, there’s plenty of life on Earth that has yet to be discovered, meaning there could be more kleptoplastic animals out there. “It is not unlikely that more animals with this ability will be described in the future,” says Van Steenkiste.

But if you look past the animal kingdom, you’ll find quite a few more examples of organisms that use kleptoplasty. “There are a whole variety of protists … that also can pull this off,” says Moeller.

Protists are single-celled organisms, and many of them can absorb chloroplasts of algae that are smaller than them. They do so in various ways: Some wrap a chloroplast into their translucent body, allowing it to keep on making energy, while others go one step further by plucking out an algae’s cell nucleus intact, using its genetic instructions to keep the chloroplast in working order.

“It’s like it stole the car and then it also stole the owner’s manual, so that you can repair the car, and maintain the car, and keep driving the car,” says Moeller.

It’s also in these protists that kleptoplasty can show scientists back in time, more than two billion years past, before plants evolved on Earth. Many scientists believe that, back then, chloroplasts, along with other parts of the cell such as mitochondria, were free-floating organisms of their very own that were integrated and “domesticated” into the organelles you know and love from high-school biology.

“If you look at all the photosynthetic organisms, chloroplasts have actually moved across lineages,” says Moeller. “They’ve sort of jumped across the branches of the tree of life.”

How exactly that happened, and how differing life-forms acquired the ability to turn light into energy, isn’t known. But by stealing chloroplasts from algae, kleptoplastic protists or animals are doing just that.