Bloodsucking Hookworms May Provide A Treatment For Asthma

Parasitic soup that’s good for you 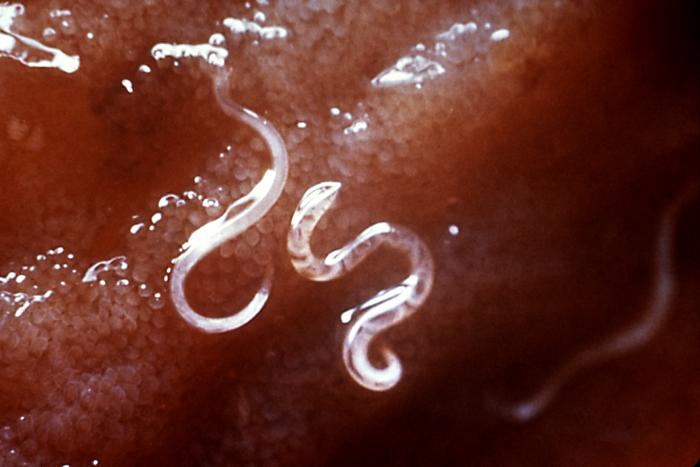 Hookworms have traditionally been thought of as parasites that only cause digestive havoc. But recently, scientists have found that a lack of hookworms in the digestive tract may be a key factor in the development of autoimmune conditions, such as asthma. Scientists are trying to harness the hookworms' power to treat and prevent these diseases. This week, researchers have identified a protein that might hold the healing powers. CDC
SHARE

For centuries, doctors and scientists have thought of bloodsucking hookworms as parasites to be eliminated. After all, a hookworm infection can cause severe stomach cramps, nausea, diarrhea, and more. But, recent research suggests that these parasites may in fact be beneficial in preventing autoimmune diseases. Scientists are now turning back to these detestable little worms in search of treatments for these conditions. This week, a group of scientists report that they have isolated a protein secreted by these worms that could be a key factor in their healing powers.

Several studies done over the last several years have found a connection between the rise of autoimmune diseases in developing countries and a decline in these parasitic infections as well as improvements in public sanitation—a phenomenon known as the “hygiene hypothesis.” So scientists have been studying whether re-infecting patients with certain hookworms could be a beneficial treatment for their autoimmune conditions. A few phase II and phase III clinical trials are already underway and showing success in celiac and inflammatory bowel diseases in participants who volunteer to have live hookworms placed in their guts. The results of the study this week show that if scientists can harness the particular protein in hookworms that yields the healing powers, then perhaps people won’t need to ingest the entire hookworm.

“We found that you don’t need the whole parasite to see protection against inflammation. The products that they secrete in their spit [are] where all the protective properties lie,” said lead study author Severine Navarro, an immunologist at James Cook University.

So how can a hookworm protein help treat asthma?

During an allergy attack, immune cells trying to get rid of irritating particles like dust mites go overboard. This causes a lot of inflammation and contraction of smooth muscles, making people wheeze and cough. In asthma, the reaction becomes built in and can happen even when irritating particles are absent, said Navarro. But hookworms secrete anti-inflammatory protein 2, or AIP-2, which re-wires the immune reaction from being pro-inflammatory to anti-inflammatory.

Creating a “soup” of AIP-2 and injecting it in mice, showed that the protein “almost completely reversed” asthma symptoms, according to Navarro. Not only did the number of inflammation-causing enzymes decrease, the rodents’ lung function and breathing also improved.

The researchers also found that AIP-2 changed the composition of immune cells and prevented inflammation in human cells taken from the pricked skin of people with a dust mite allergy. Those results were published in the journal Science Translational Medicine.

Although Navarro cautions that not all parasites may provide such benefits—some may still be harmful to human health—the results provide hope that the hookworm protein could be turned into a pill to benefit people with asthma and allergies. And Navarro’s team is already hunting for a company to start doing some clinical trials. It would certainly be a way around the “yuck factor” of having to host live ones in our guts, but it would also provide a way to get the benefits of the parasites without the gastrointestinal risks.