The data must flow 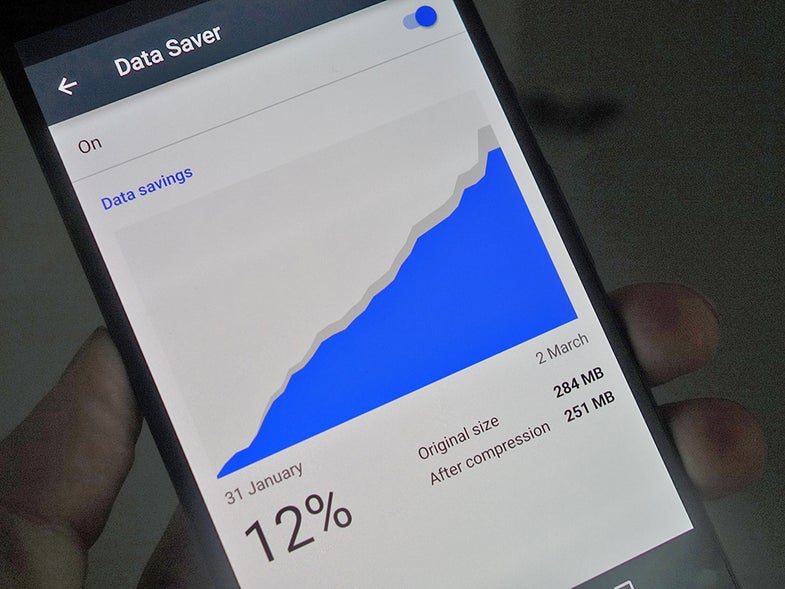 Smartphones put a world of information, games, videos, and music at your fingertips. That is, until you run out of data. It only takes a few minutes of throttled, agonizingly slow speeds to realize how much you rely on that cellular connection—and how important it is to stay within your data allowance. The solution: Cut back on the amount of data your phone chews through. Adjusting your settings to reduce data usage will come in handy for those with limited data plans or travelers who plan to spend time out of network.

We’ve collected some tips for staying on the right side of your data boundaries. Whether you have an Android or an iPhone, there are two sets of options you need to bear in mind: Those in your phone’s main operating system settings, and those in the individual apps you’ve installed.

Android gives you a detailed look at your overall data usage—just tap Data usage in the Settings app (if you’re not using stock Android, you should see something similar). There are a few helpful tools here: You can obviously see your current data stats, but if you tap on the graph, you can also set a level at which Android displays an alert about your usage. Check your monthly plan and configure the limit accordingly.

Tap the Mobile data usage entry further down to get a more detailed look at the data you’ve been using, as well as a list of the apps that have been the worst offenders for eating up your allowance—this will come in handy when we configure individual app settings later on.

You can also tap Data Saver to turn on this useful feature, built into the latest versions of Android. It limits the data apps can use in the background, which stops most apps from downloading or uploading data (think background email syncing and so on) when they’re not actually open—unless you’re connected to Wi-Fi.

To manually set whether apps can or can’t use data in the background, tap on the individual app entries in the Mobile data usage list.

Meanwhile to stop apps from updating when you’re not on a Wi-Fi connection (some of those updates can be pretty hefty), go to the Play Store app, open the Settings option from the menu, and tap Auto-update apps.

Finally, tap the menu button on the Data usage screen (the three vertical dots in the corner) and then pick Mobile networks. Here you can switch off data roaming, where data is downloaded on cellular networks other than your registered one (usually when you’re traveling). This can help avoid unwanted bills when you get back from vacation.

Over on iOS there are some comparable settings you can work through to take control of your iPhone or iPad’s data usage. Get to know these options first and then move on to individual app settings later if you need to.

Tap Cellular Data (labelled Mobile Data in some parts of the world) in Settings to get at all the key configuration options. This screen also lists how much data individual apps are using, just like the Android equivalent does.

To prevent an app from using data when not on Wi-Fi, just toggle its switch to off. To shut down mobile data completely, toggle the top switch. The Cellular Data Options submenu, meanwhile, lets you turn off data roaming when you’re not connected to your primary network (like those times when you’re out of the country).

The newest versions of iOS have a Wi-Fi Assist feature, where your device will fall back to cellular networks if Wi-Fi reception is poor. It’s designed to speed up browsing on patchy Wi-Fi networks, but it can chew through a lot of data. To prevent that, switch this option off underneath the apps list.

As on Android, you can tell iOS not to download app updates over cellular networks: Choose iTunes & App Store from the Settings app, then toggle the Use Cellular Data option to off.

Another option is to prevent apps from uploading and downloading data in the background while they’re not in use. Tap General then Background App Refresh from Settings, and you can disable this for individual apps or stop it completely.

There are plenty of ways to configure Android or iOS to use less data, but some individual apps will have data usage settings of their own. We can’t cover every app out there, but these tricks should rein in some of the most data-hungry ones.

Open up the settings in the Facebook app, for example, and you can stop videos from autoplaying when you’re not on Wi-Fi, cut down on the number of notifications you get, change the quality that photos and videos are uploaded at, and more. The settings menu layout varies between iOS and Android, but these options are easy to find.

Google Chrome for Android has a data saver tool all of its own—it preloads and compresses pages through Google’s servers before sending a stripped-down version to your mobile. You can enable it from the main Settings menu inside the app.

Have a look at the apps on your own phone to see if any similar options are available, particularly for those apps that are appearing high up in your data usage tables. For example, think about music and podcast apps—are they syncing playlists and downloading new content over cellular connections? The settings for many of these apps will let you restrict this activity so it only happens over Wi-Fi networks.

Preparation will also help you cut down on total data usage. We’ve already mentioned music playlists, which you can sync ahead of time while you’re still on your home Wi-Fi, but you can do the same in Google Maps: Go to Offline areas from the main menu, and you’ll be able to download parts of the map before leaving the house. This should save you from using as much data when you’re on the road.

Finally, get connected to as many Wi-Fi spots as you can: at work, at your coffee shop, at your friends’ houses (as long as they’re not unsecured networks). Any time you’re not relying on cellular networks alone, you can be saving on data.