Make your phone and computer team up to get more done

Five ways to link your devices. 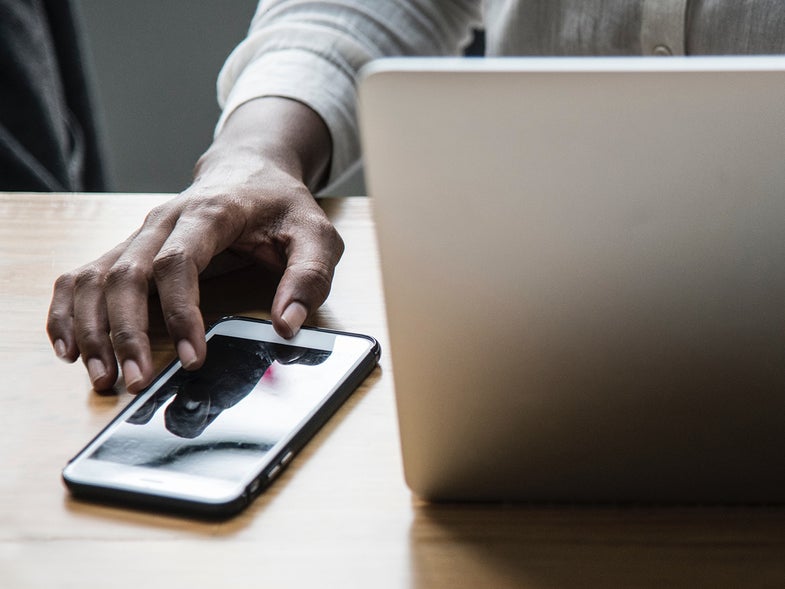 You already split your screen time between your smartphone and your computer. Why not put the two together? There are several ways to use your devices in harmony, increasing the efficiency of both. From syncing data to jumping between apps, here are five ways to make your phone and computer play nice.

1. Sync files through the cloud

If you work on the go, you’ll want access to the same files on both your phone and computer—so sync them up. Lots of apps will do the job for you, but all of them function in more or less the same way. First, choose a service. On your phone, install the mobile version; on your computer, download the desktop client or access the web interface through your browser. Then sign in to your account whenever you want to access your up-to-date files.

The hardest part is probably choosing which service to use. On iOS, the default option is iCloud, and on Android, it’s Google Drive. When you set up your phone, it will prompt you to sign in with your Apple or Google account to configure these services, and once you do, they’ll be compatible with both Windows and macOS machines. That said, you don’t have to stick to the default apps. You can download Google Drive to iOS as well as Android devices. Or eschew both and go for a third-party service like Microsoft OneDrive or the excellent Dropbox. Both work on all the major operating systems: iOS, Android, macOS, and Windows.

If you’re still unsure which will work best for you, do some price comparison. Apple gives you 5GB of iCloud space for free, with paid plans starting at $1 a month for 50GB of storage. Google offers 15GB of free space across all its apps (so your Gmail attachments and Google Drive files will need to share that room), and more will set you back $2 per month for 100GB and up. OneDrive gives you 5GB of free space, with the cheapest upgrade $2 a month for 50GB. Finally, Dropbox offers 2GB to users for free, with extra cloud storage costing you $8.25 per month for 1TB.

2. Bring your browser with you

You already store a lot of your important stuff—think passwords, bookmarks, searches, and browsing history—in your browser. You can take all this with you by creating a user account and then opting to sync your data.

The good news is that all the major browsers offer this option. The only restriction hits if you use Safari on your Apple computer and you own an Android device. The Safari mobile app is only available for iOS, so if you don’t have an iPhone, you’ll have to pick a different browser, such as Google Chrome, Mozilla Firefox, or Microsoft Edge.

Once you’ve chosen a browser, download it onto both your phone and your computer. When you launch the app, you’ll see a prompt urging you to sign in with a Google, Firefox, or Microsoft account.

Next, head to the browser settings to adjust the sync options. In the iOS versions, for example, head to an app’s settings and tap the Sign in to Chrome button (Chrome), the Sign in to Sync button (Firefox), or the Sign in with a Microsoft account button (Edge). You follow similar steps in the Android versions. Safari—again, only on iOS—is a little different: Go to the iPhone’s main Settings appe, tap your Apple ID name followed by iCloud, and then turn the Safari toggle switch to On. Once you set up syncing, it will happen automatically in the background.

The latest Windows 10 update introduced a new app—called, imaginatively enough, Your Phone—for making your phone and computer work in harmony. The app is still in development, so for now, it just syncs photos and text messages between both devices.

Start by launching the program on your computer: Type “Your Phone” into the search box on the taskbar and pick the top option on the list. When it opens, sign in with your Microsoft account, which will tie together your data across desktop and mobile. Next, enter your phone number. This lets your handset receive a text message with a link to the Your Phone Companion app. You can also install this app manually). Once you’ve signed in on your phone, both devices will be able to “see” each other.

This means you can view your recent phone photos from your larger screen. Just open the computer app and click the photo icon on the left. From this interface, you can scroll through your pictures. Selecting one opens it up in Windows’ default image editor. As for text messages, you view them by clicking the message icon on the left. You can read SMS messages from this interface, and even send them (although technically it’s your connected phone that does the sending).

Unfortunately, for the time being, these features work with only Android phones, not iPhones. But one Your Phone trick works on both platforms. If you’ve installed Microsoft Edge on your phone and computer, you can tap the mobile version’s share to PC button (it looks like an arrow inside a phone) to beam that webpage to the desktop version of the browser.

If you rely entirely on Apple’s products—an iPhone and a Mac computer—then you can use its Continuity feature. This provides several different ways to link your mobile and desktop in tandem, as long as you sign into both devices with the same Apple ID, enable Bluetooth, and connect them to the same Wi-Fi network.

One new ability added this year—Continuity Camera—lets you instantly import photos from your iPhone into several desktop applications, with no intermediate stages. Say you’ve opened a Keynote presentation on your computer, for example. Click Insert > Insert from iPhone > Take Photo, switch to your iPhone (which will already be in photo-taking mode), and snap the image. This trick also works in Mail, Messages, Notes, Finder, and other apps.

Another useful part of Continuity is called Handoff. If you’re running a compatible app—Mail, Maps, Safari, Reminders, Calendar, Contacts, Pages, Numbers, or Keynote—on both iPhone and Mac, you can jump between devices and keep the same data on screen. You’ll find these “hand off’ options on iOS’s multitasking screen (to access it, swipe up and hold) and in macOS’s dock.

The last cool feature we’ll mention is the Universal Clipboard, which should work automatically if you’ve set up Continuity (signed in, enabled Bluetooth, logged in to the same network). Copy some text or images on one device, and you can paste it into an app on the other. Once you’ve copied something on your phone, just hit paste as usual on your computer—or vice versa.

Many third-party apps will automatically sync between the mobile versions and a web portal or desktop version. You should download as many of these team players as you can. Even if you don’t think your favorite apps have desktop or web versions, it can’t hurt to check.

Google sets a fine example: You can use its Calendar, Gmail, and Maps within your computer’s web browser, and access the same information through the corresponding mobile apps. As long as you sign into the same account, Google will automatically apply any changes and sync all of your data.

When you’re looking at instant messaging apps, you’ll want something that syncs. Apple’s Messages app updates all your conversations so you can access them on both iPhones and Macs—but this won’t work if you have an Android phone or Windows computer. One alternative is WhatsApp: It’s available for Android and iOS, and you can also view your conversations in a browser window on your computer. To enable this, open the mobile app, tap the Menu button (three dots), hit Settings > WhatsApp Web and follow the instructions. Facebook Messenger also works seamlessly across Android, iOS, and the web.

Other popular apps that will sync between devices include Evernote for digital jottings, Skype for voice and video calls, Pocket Casts for podcasts, and Netflix for streaming videos. But Spotify really sets the standard for cross-platform compatibility: It works on every major operating system (Android, iOS, macOS, and Windows) and has a web portal to boot.