Don't worry, it's not going to be like the recent movie. 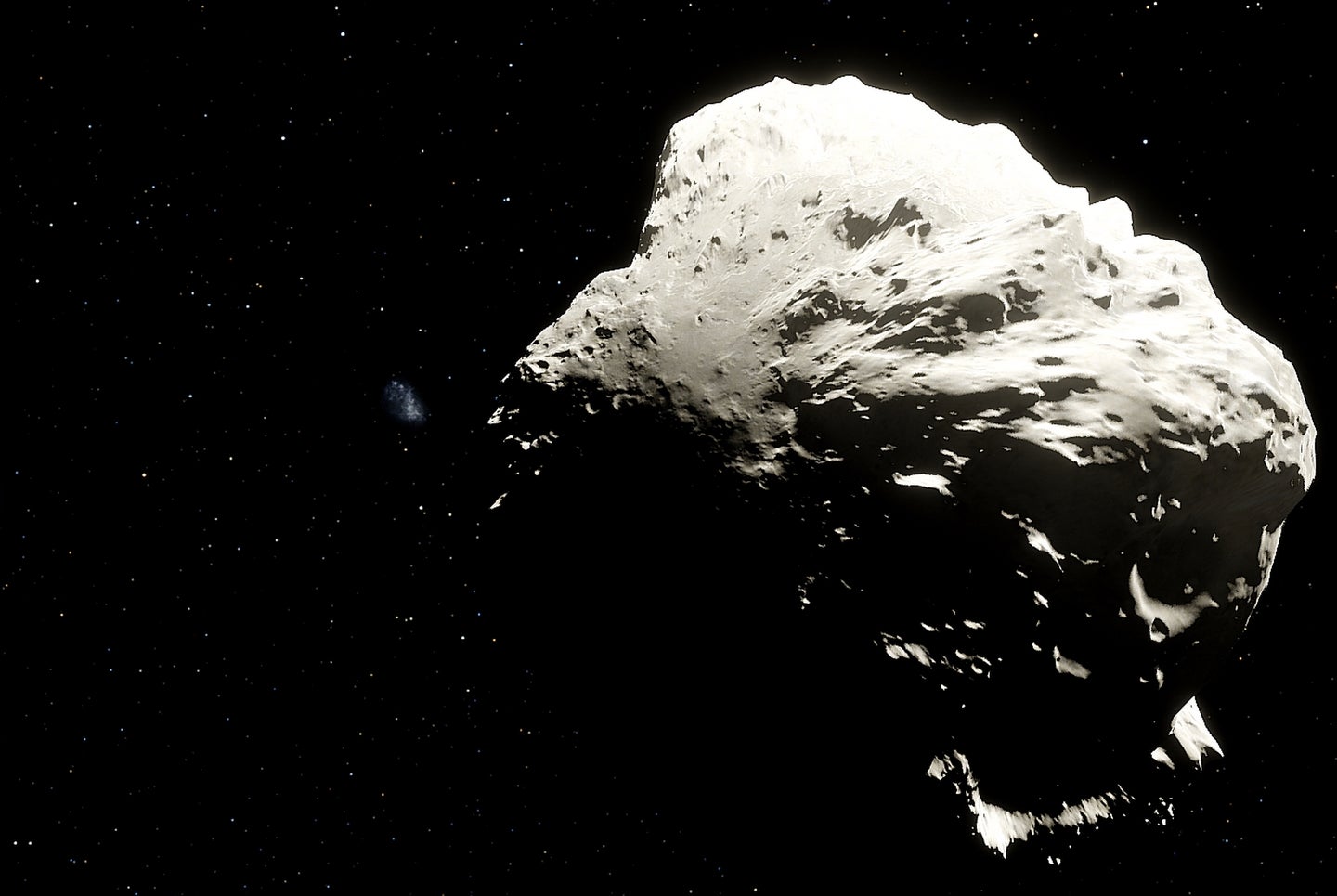 Just after twilight settles over the East Coast tonight, backyard astronomers can look through their telescopes to catch a glimpse of an asteroid zipping through the sky. The near-Earth asteroid 7482 (1994 PC1) will hurtle past our planet at 43,754 miles per hour, according to NASA JPL’s Center for Near Earth Object Studies (CNEOS). There isn’t any concern over a collision, the center tweeted on Wednesday, January 12. Asteroid 7482’s path is 1.2 million miles (1.98 million kilometers) away—that’s about five times the distance of the moon’s orbit.

“While asteroid 7482 is passing by the Earth at about 5 times the Earth-Moon distance, its orbit is extremely well-determined, and it does not pose any impact risk to the Earth over the next century,” Amy Mainzer, a professor of asteroid surveys at the University of Arizona’s Lunar and Planetary Lab, wrote in an email on Tuesday.

But the big chonky space rock—at 1.1-kilometers wide, it’s about the size of the Golden Gate Bridge—will be close enough for some folks to see briefly with small telescopes. It’s expected to be closest to the planet at 4:51 p.m. EST (21:51 UTC) today. The asteroid can be best seen at longitudes in Africa and Europe, but stargazers in North America might be able to catch a glimpse around dusk. And you’ll want to see this flyby today: You won’t have another chance until the next predicted closest encounter in 2058, when it’ll be even further away, at more than 13 million miles.

Mainzer says observers will have to keep their eyes peeled and act fast. “It is getting faint very quickly over the next few days as it zooms away from the Earth-Moon system,” she said.

[Related: NASA is winding up to punch an asteroid]

Survey telescopes have recorded nearly 28,000 near-Earth asteroids, and they add new entries at a rate of about 3,000 per year, according to the latest data from CNEOS. Asteroids are considered “potentially hazardous” near-Earth objects if they come within 4,650,000 miles of the Earth and are larger than approximately 500 feet in diameter. “Objects that are larger than 1 kilometer are capable of causing global devastation if one were to impact the Earth,” said Mainzer, who was a science consultant on the recent disaster film “Don’t Look Up.” “Asteroid 7482 is about a kilometer across, so it is on the larger side.”

By comparison, the asteroid that wiped out the dinosaurs is thought to have been between 3 to 6 miles across, Mainzer explained. She added that about 95 percent of near-Earth asteroids are larger than 1 kilometer, but only about 30 to 40 percent of those large enough to cause severe regional destruction have been found to date.

Scientists are able to predict the trajectory of many known asteroids, unlike the chaotic, terrifying nature portrayed in many popular culture doomsday scenarios. Asteroid 7482 is classified as an Apollo asteroid, which are asteroids that have an orbit that intersects with Earth’s path, but people shouldn’t worry about the asteroid striking the planet. In the tweet, the CNEOS said that asteroid 1994 PC1 “is very well known and has been studied for decades by our Planetary Defense experts.”

As its name implies, asteroid 7482 (1994 PC1) was discovered decades ago in 1994 at Siding Spring Observatory in Australia, with even earlier observations dating back to 1974, reports EarthSky. “This object is not of concern to me,” said Mainzer, who added that 50 years of observation provide “exquisite knowledge” about its orbit. “However, it is a reminder that we still have a lot more work to do to map out the locations of its still-unknown cousins.”

Research projects such as NASA’s Near-Earth Object Wide-field Infrared Survey Explorer (NEOWISE) mission aims to characterize asteroids and comets to better understand the nature of these orbiting objects. Mainzer, who is the principal investigator of NEOWISE, is working to complete the survey of these intermediate-to-large celestial bodies and continue mapping objects that could pose a severe regional hazard to Earth. “This flyby is a reminder that, while we know where this asteroid is, the ones we need to worry about are the ones we haven’t found yet,” says Mainzer.

If you’d like to view asteroid 7842’s journey across the sky tonight, but do not have access to a telescope, you can watch a livestream hosted by astronomer Gianluca Masi and the Virtual Telescope Project.

Correction (January 18, 2022): An earlier version of this story featured an image of a comet. It has since been updated with a different rendering.