And it's supported by hard robo-cartilage 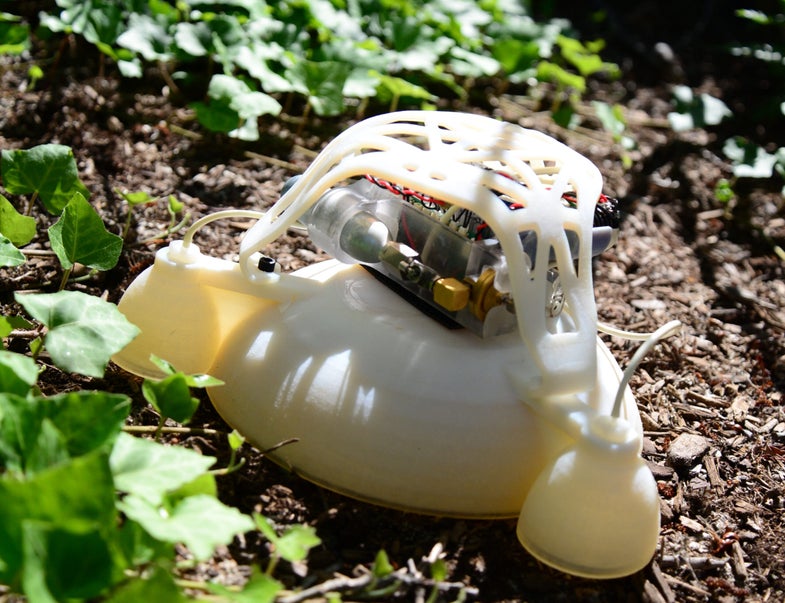 We rarely think of robots as soft, with mechanical brains inside squishy, durable bodies. That’s because, despite their resilience, soft robots are slow beasts, the machine equivalent of floppy slugs. Rigid robots are good at many things, but it turns out that if a robot is to survive a jump, a soft body helps greatly. So researchers Harvard 3D-printed a robot with a body that’s hard where it needs to be and soft enough to jump.

Pneumatics fuel the jump. First, one more more of the legs inflates, angling the robot in the direction it wants to go. Then the robot releases oxygen and butane inside its soft belly. With a spark, this explodes, sending the belly blasting outwards, hurtling the robot into the air. It’s similar to the mechanism that lets this soft robot play beer pong, but a lot more explodey.

To make the best pneumatic jumping robot, the researchers calculated results for three variants: one with a flexible body, one with a rigid body, and one whose body transitioned from rigid to flexible. The completely flexible robot was determined to be a poor jumper based on calculations alone, so the researchers instead tested just the rigid and gradient versions. The rigid robot jumped the highest, but it also crashed the hardest when it landed. The gradient robot, instead, survived over 100 jumps.

Future soft robots may well learn from this experiment and have semi-rigid bodies that confer some of the function of a hard body but with less potential to shatter on impact.