Your phone’s camera does so much more than take pictures

With apps, it can translate text, identify stars, and more. 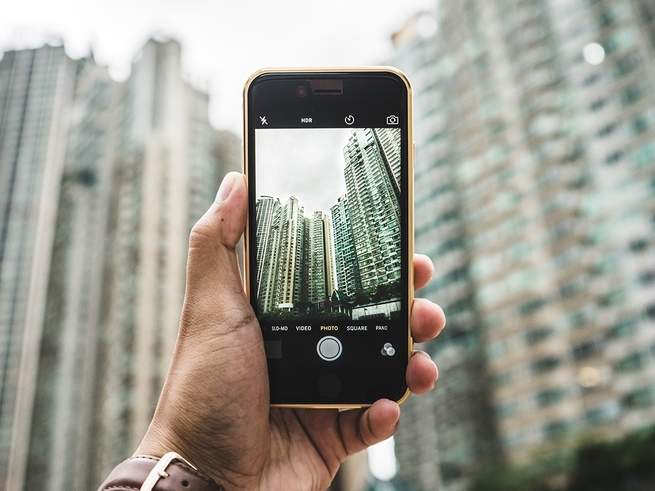 If you're only using your camera for this, you can do so much more. Redd / Unsplash
SHARE

This story has been updated. It was originally published on March 15, 2018.

Smartphone cameras can do more than snap pictures of partying friends and sweeping landscapes. With the right apps, your camera can perform feats from translating texts to scanning paperwork. Get to know some of its handiest superpowers.

With a typical translation app, you have to tap out text in a foreign language and then convert it to your native tongue, or vice versa. This can be a tedious process—especially if a server is hovering over you waiting to take your food order. Here’s a better idea: Scan the menu (or any other document) with your phone’s camera and instantly view the translation.

You can work this trick on any phone with the free Google Translate app (for Android and iOS). Once you download the program, open it and choose the languages you need—the one you’re translating from and the one you want to translate to—from the drop-down menus at the top of the screen. You can also select Detect Language to have the app sort it out for you. Then, tap Camera and hit Instant (which has a small camera-like icon next to it). Finally, point your phone’s camera at the text, whether it’s a road sign or a paper document, and the screen will display the translated words. This will work with 88 languages—check the list on this page if you’re having trouble.

If you own a Samsung Galaxy phone, version S20 or later, you can pull off the same feat, called Live Translation, with the native camera app. Just open it, select Auto mode and tap the Bixby Vision button, which looks like an eye, from the lower left-hand side of the screen. Then, select Text mode and point your camera at the document you want to translate. Your phone will automatically detect the language and translate the words into your phone’s default tongue.

Gazing up at the stars on a clear night is dreamy, but you can make that experience even better by identifying which dot of light is which. With the right app, your phone’s camera will act as a star guide. Point it at the heavens, and visual overlays will tell you whether the object you’ve spotted is the International Space Station or the star Polaris.

Our top pick is Star Walk 2 (for Android and iOS), which offers a nicer design and more features than similar apps. It relies on your location and input from the phone’s internal gyroscope to pinpoint constellations, passing satellites, and other objects. You can also use it to read up on the cosmos, view 3D models of constellations, and see how the night sky changes as you move forward or backward in time. The app is free with ads or $3 without.

Want to see digital graphics overlaid on your phone camera’s view of the world? You have more options than ever before: Both Android and iOS have augmented reality features, and third-party app developers have also jumped on the AR bandwagon.

To dip a toe into the AR waters, start with Snapchat (free for Android and iOS). Install the photo and video messaging app, open the camera screen, and tap anywhere on the scene. Snapchat will immediately display a variety of AR stickers, which you can preview with just a tap. Then adjust your angle, place the sticker where it fits best, and take a photo or video as normal.

If Snapchat isn’t for you, you can still enjoy AR on your phone. A few examples: PGA Tour AR (free, but for iOS only) places golf holes on top of nearby surfaces like your kitchen counter, Inkhunter (free for Android and iOS) lets you preview tattoos on your skin before you apply any needles, and Ikea Place (free, but for iOS only) will drop AR versions of furniture into your real rooms so you can check out how they look. And of course, there’s always Pokemon Go (free for Android and iOS) and other AR games.

The world hasn’t gone paperless yet, but you should do your part by converting paper documents into digital form. Thanks to your phone’s camera, you can scan everything from bank statements to business cards and keep them on your phone or upload them to the cloud.

While you can always snap photos of documents and keep them in your default photo app’s gallery, a dedicated app will provide extra features such as automatic cropping and even text recognition (so you can easily search through your scanned pages). For a full list of apps, check out this guide to paperless apps and gadgets. Of the items on the list, we like Google Drive and Dropbox best.

The version of Google Drive for Android can scan documents, but the one for iOS cannot. On Android, tap the plus icon and choose Scan. As a bonus, the app also offers automatic optical character recognition.

Dropbox (free for Android and iOS) also includes an integrated document-scanning feature that employs your phone’s camera: From the front screen of the app, tap the plus icon above Create, then Scan document. If you pay for any of the upgrades (from $10 to $20), you’ll also unlock automatic optical character recognition and document-searching abilities.

With a little help from the Google Lens technology built into Google Photos for Android and iOS, you can snap an image of anything and receive information about that object.

To employ this trick, use Google Photos to open any image, then tap the Google Lens button, which looks like a simplified camera shape, at the bottom of the screen. The software will recognize an object in the photo, whether it’s a historical landmark or a type of flower, and provide information about it. Think of it like a visual search tool, recognizing everything from celebrities to famous works of art.

If you own a Google Pixel phone, you can also access Lens through Google Assistant. Tap the Assistant button on the right end of the Google search bar, then tap the Google Lens button in the lower right and point your camera at a target. Tap the screen to confirm that the pictured item is the one you want to learn about, and information will pop up on the display.

Photographing a QR code—those squares filled with a random-looking mosaic of black and white tiles—will give you a shortcut to open a website. You’ll find QR codes on menus, packaging, posters, brochures, stationery, and other items. For example, scanning one of these boxes on a magazine advertisement can lead you to a website with more information about the item or open a special online discount.

[Related: How to make your own QR codes]

For both iPhone and Android, users can open the default camera app, point the handset at a QR code, and check out the notification that appears. Tap it to read more, including the hidden URL.

Your phone can do double duty as a security camera that keeps an eye on your property, pets, or even kids. For this task, you’ll need two devices, one to film the video feed and another to tune into it. An old device that’s been gathering dust would be perfect for the job.

One of the best apps we’ve seen is called Manything (for Android and iOS). It lets you tap into the livestream from afar at any time, and it can send alerts when it detects motion in front of the camera. A subscription, which costs $2 to $20 per month, will let you save footage to the cloud and set up more than one camera.

If you’re focusing on baby monitoring, we like the apps Dormi (for Android only) and Cloud Baby Monitor (for iOS only). Dormi lets you connect to your monitoring phone or tablet from multiple devices, and it automatically amplifies the volume when it detects crying. The free version only provides four hours of monitoring a month; after that, subscriptions cost $2 for a month, $10 for a year, or $17 for life. With Cloud Baby Monitor, you can also tap into a live video feed from any other device. You can also receive alerts when the app detects motion or sound and send audio messages to your child from afar. It costs $5 up front.

Although this final application still involves taking photos, they’re not intended for Instagram or Facebook posts. Instead, you can use smartphone images as memory aids. Think about all the times you need to memorize new information, such as the Wi-Fi code at your friend’s house or the way cables fit into the back of your television. You could jot down notes on paper or a memo app, but snapping a photo is faster and easier.

If you’re moving to a new house, photograph the contents of boxes so you remember what’s packed where. On vacation, record your ski or park pass in case you need to replace it at some point. During an overnight stay, photograph your hotel’s list of emergency numbers for future reference.

To keep these notes organized, put them in a dedicated album. On iOS, open My Albums, tap Edit, hit the plus icon in the top left, and select New Album. Once you enter a name for the album and save it, you can tap the share icon at the bottom left of any photo (it looks like a square with an upward arrow), select Add to Album, and choose the one you want. Then, no matter where you go, you’ll have the necessary information close to hand, where you can easily pull it up the next time you need it.

On Android, the easiest way to organize these memory helpers is by adding them to Google Keep notes. Just open the app (it comes included on most Android phones) and tap the image icon at the bottom of the screen. Then, tap on Take photo or Choose image, depending on whether you’ve already snapped a pic of what you want to remember. The app will automatically add the photo to a note. You’ll be able to add text to it, or even create a widget in your home screen to always have it at hand.