Should we mine the deep ocean?

Behind the deep sea “gold rush” for increasingly rare minerals 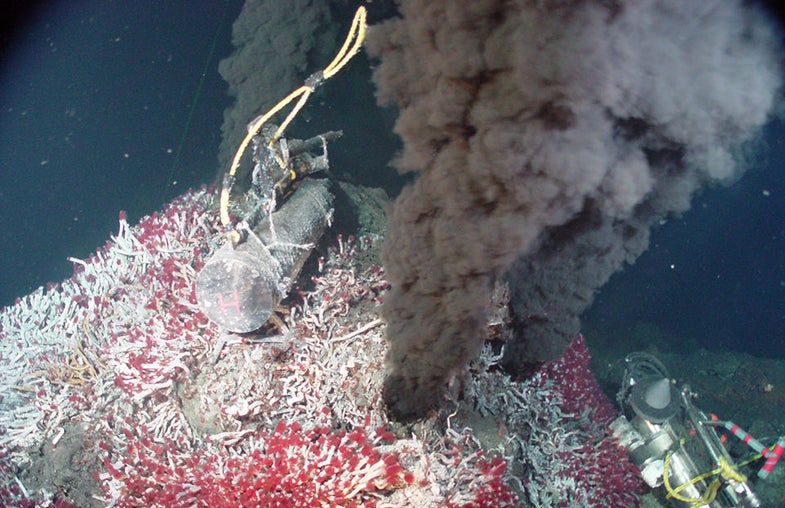 You’ve probably heard of peak oil—the point at which oil production reaches its maximum and begins to decline—but what about peak copper?

Copper helps send the electrical signals that make modern electronics like cellphones and tablets work. But there’s growing concern that the prevalence of key minerals like copper is on the decline.

In 2016 the Chilean Copper Commission (Cochilisco) released a report that looked at 15 years of copper exploration data. They found that most new copper deposits had been found before 2010. The world hasn’t stopped looking for copper, but we’ve stopped finding it.

And copper isn’t even the mineral that makes companies most nervous—it’s still pretty abundant. Minerals like tantalum, tungsten, and molybdenum are another matter entirely. They’re vital to manufacturing high-tech devices and don’t have ready substitutes. These minerals are often not mined directly but are byproducts of other types of mining. And recycling, in this case, isn’t a panacea. Often, the amount used in any given device is actually quite small, which makes reclaiming it difficult and expensive. So worries of a looming shortage have mining companies eyeing a hitherto untapped resource—the deep ocean.

“There are 27 licenses issued for sea mining exploration,” said Mark Hannington, a geologist at GEOMAR-Helmhotz Center for Ocean Research. Hannington spoke on Friday at the 2017 annual meeting for the American Association for the Advancement of Science in Boston.

In 2015, a group of Yale scientists assessed the “criticality” of all 62 metals found in the iPhone. Some of the most worrisome minerals might exist in the deep ocean.

The deep sea is home to three types of mineral formations that might be suitable for mining. The first are polymetallic, or manganese nodules, a kind of metallic nugget that rests on the sea floor. The second are polymetallic sulphides. These are a mix of minerals like gold, silver, copper, lead, zinc, and rare earth metals like molybdenum, tellurium, and titanium that form along the ocean floor—near underwater volcanic vents. Finally, there are cobalt-rich ferromanganese (Fe-Mn) crusts that form a layer of the ocean floor. Polymetallic nodules are most ripe for mining due to ease of access and existing technologies.

Hannington thinks that companies may turn to deep sea mining for these resources even if it doesn’t make sense financially. China controls the market on rare earth minerals, and much of the world’s tantalum supply is in the unstable Democratic Republic of the Congo. Countries may bear the cost of mining minerals themselves in order to gain independence from a volatile global mineral market.

But deep sea mining involves delving into the unknown. We’ve explored only five percent of the deep ocean. And what little we do know suggests that mining these waters may be a perilous endeavor.

Take the nodules. Analysis of minerals in the Clarion-Clipperton zone, one of the better mapped regions of the ocean, suggests that the nodule layer isn’t very thick. According to Hannington, we’d have to scrape a 62-square-mile area of the zone to net the amount of copper found in a typical mine on land.

Then there’s the fact that each of those nodules is an ecosystem—one that plays host to many microorganisms. Early evidence suggests mining disrupts that ecosystem and has long-lasting harmful effects.

Stace Beaulieu a biological oceanographer at Woods Hole Oceanographic Institute, showed photographs of an area that had been trawled—its nodules had been scraped up. Twenty-six years later, the trawl lines still stick out. The nodules have not come back.

“Organisms associated with the nodules will be lost,” said Beaulieu. “What will happen to the animals in the sediment? That’s unknown.”

Finally, we don’t even know how many minerals are actually in the deep sea. What data exists is pretty speculative in nature.

“The kind of research that we do is very expensive,” said Beaulieu. Academic researchers are mainly investigating the potential impacts of mining on the environment—not on industry. So there’s little data to support aggressive deep sea endeavors, and even less suggesting that ocean mining is better than sticking to land.

“We need to get quantification between the balance of the land resource and the sea resource,” said Thomas Graedel, an industrial ecologist at Yale University. “Without vigorous research on land and in the ocean, it’s very hard to say ‘are we going to run short [or resources]’ and where.”

But while it’s hard to say when on-land resources will run dry, there’s no question that the clock is ticking—and little doubt that the deep ocean will soon be plundered in the name of technology. It might behoove us all to hold onto our cellphones, laptops, and other electronic whiz bangs instead of splurging for the next available upgrade.