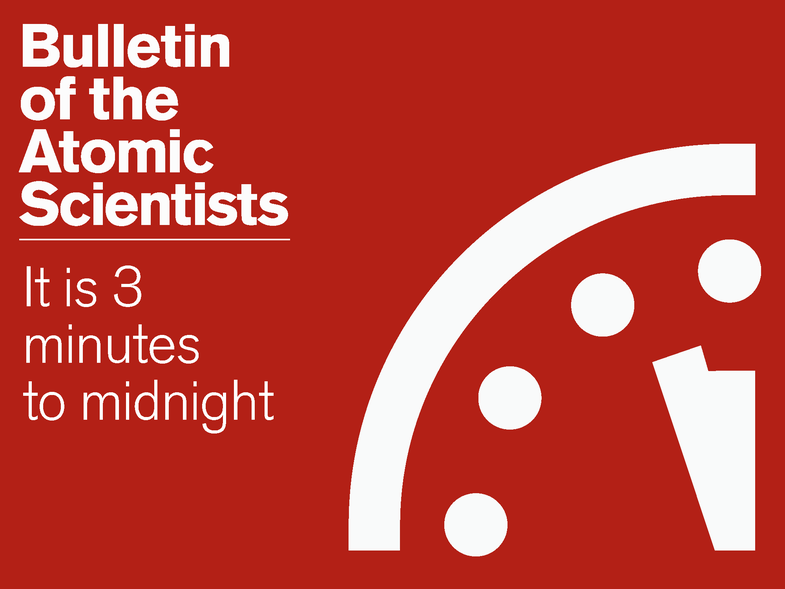 In a multitude of books, TV shows, and films dedicated to post-apocalyptic fiction, humanity loves to fantasize about its ultimate demise. But back in the real world, the actual apocalypse may be a little bit closer than we all would like to admit.

On Thursday, researchers working for the Bulletin of the Atomic Scientists moved the secondhand of the infamous Doomsday Clock two minutes closer to midnight, changing it from five minutes to just three minutes away. According to Kennette Benedict, executive director and publisher of the Bulletin of the Atomic Scientists, the combination of unchecked climate change and the race to obtain nuclear arms is ultimately to blame for the advanced ticking of the clock.

“While there is still time to act and real steps that can be taken, they will have to come soon – very soon – in order to avert catastrophe.”

“World leaders have failed to act with the speed or on the scale required to protect citizens from potential catastrophe,” Benedict said in a statement Thursday morning. “These failures of leadership endanger every person on Earth.”

Since its inception in 1947, the Doomsday Clock has been a figurative representation of how close humanity is to the apocalypse, with midnight serving as our species’ final chapter. The clock’s “countdown to zero” is meant to convey the likely threat of global nuclear war, as well as the probability that other factors, like climate change and developments in technology, will wipe the human race off the map. Founders of the Bulletin – Chicago researchers who had been involved in the Manhattan Project – created the clock after becoming concerned over the global power struggles the atomic bomb would create.

The decision to change the Doomsday Clock lies in the hands of the Bulletin’s Science and Security Board, in collaboration with the Board of Sponsors, which together contain 17 Nobel laureates. Over the years, the clock has been changed 22 times, with three minutes being the second closest the clock has ever been to the final hour. The last time the Doomsday Clock was just three minutes away was in 1984, during the height of the Cold War. The closest time the clock has ever seen – two minutes away – occurred in 1953, when the United States first tested the hydrogen bomb.

Yet Benedict says all is it not lost. “While there is still time to act and real steps that can be taken, they will have to come soon – very soon – in order to avert catastrophe.”