It would be easy to dismiss Mitchell Joachim’s fantastical vision for ecological supercities, with their flocks of jetpacks and mass-transit blimps that look like flying monster jellyfish, as science fiction—if he wasn’t actually building them 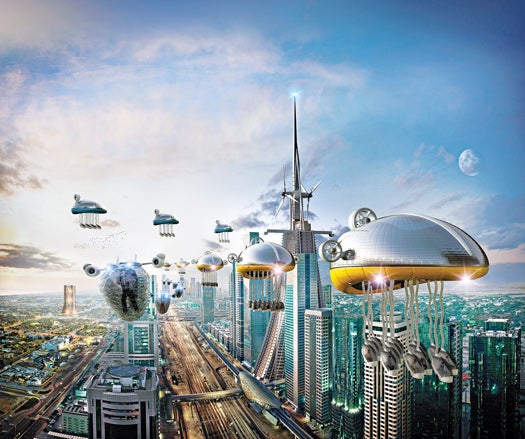 Architect Mitchell Joachim points out, frequently and without prompting, that his futuristic proposals are always based on existing technologies. No wonder he feels the need to say it. Consider some of his ideas: jetpacks tethered together in swarms, houses grown from living trees, low-altitude blimps prowling New York City with chairs hanging below them for pedestrians to hop on and off (24/7 ski lifts on Broadway!), and WALL-E-like machines that erect buildings and bridges from recycled waste.

For Joachim, a 39-year-old professor of architecture at New York University, with graduate degrees from MIT, Harvard and Columbia, these concepts aren’t Hollywood fluff but designs that could come to life today. Take his concept for waste-building machines, which he calls Rapid Re(f)use. Instead of the cubes of cardboard, plastic or steel that current recycling balers produce, Joachim’s robots would grind and compress waste into I-beams, cruciform columns or even furniture components. The structures would be pressed or melted into shape or wrapped with metal bands, which is what recycling plants do now. All that would change is the shape—like switching the mold on a Play-Doh press, but on an industrial scale. “We could do it yesterday,” Joachim insists.

His vision falls under the banner of Terreform ONE, a nonprofit design collective that Joachim co-founded to explore sustainable, fully integrated urban planning. If the same people who design the roads also design the cars, he says, and the same people who create the suburbs also plan for ways to feed and transport residents, our cities will become healthier, friendlier and more sustainable.

The group imagines how future cities might best serve their citizens on a large scale and then experiments with the small-scale materials and designs that it would take to make it happen. To this end, Terreform ONE hosts TerreFarm, an annual summer gathering of architects and scientists who develop new urban farming techniques. For several weeks this summer, TerreFarm will convert a Brooklyn rooftop into a testbed for modular growing methods, designs for maximizing available sunlight, and ultra-lightweight soil mixes essential for rooftop gardens. They will also build full wall sections of Joachim’s Fab Tree Hab, his proposal to create “living” homes by grafting trees together around scaffolds and growing them on-site.

Joachim’s other plans tend to focus on mobility, since transportation both shapes and is shaped by urban design. In his vision, individual cars would be replaced by car-share systems that function like luggage carts at an airport. Pay, step into a smart car that communicates with the city grid, drive to your destination, and leave the car there. The cars would have soft, springy exteriors, inflatable protective bladders and transparent foil, which would enable them to bump together as they traveled in flocks. “The idea of sharp metal boxes is just done,” Joachim says. “We design cars with the principle that no one would ever die in a car accident again.”

Joachim’s blimps would move like trolley cars. Their routes would be set by funicular cables, and they would float slowly enough that pedestrians would be able to hop on and off hanging chairs dangling above the ground. Unlike a trolley car, though, the blimps would also be able to cross rivers, gorges and other geographic features without bridges.

His jetpack designs are not the retro-futuristic rocket belts of the 1960s but more like the lightweight ducted-fan jetpacks scheduled to go on sale later this year from Martin Aircraft Company. For efficient commuting, Joachim’s jetpacks—soft and flexible like his cars—would be towed in flocks by a plane or blimp. “Bump and glide,” as Joachim describes it. From there, individuals could break off, power up, and fly safely to their homes or offices—like subways in the sky. “It’s hard to find people who don’t want to be moving around in jetpacks in 20 years,” he says. “As an architect, then, I’m responsible for thinking about what the implication of the jetpack is on the future city.”

Joachim’s willingness to forgo lucrative commercial projects in favor of running a nonprofit dedicated to the reimagining of a future he won’t even be around for is, say his colleagues, exactly what makes him so vital. Traditionally, “cities are built incrementally by real-estate interests,” says Richard Sommer, the dean of architecture at the University of Toronto. “What’s important about Mitchell’s work is that he [takes] a visionary approach.”

The vision part involves looking 150 years down the road and planning for how cities will have to operate within the environment if civilization is to endure. Even if the technologies exist today, Joachim says, no one can change the city tomorrow. “Once we heard about cellphones, it was about seven years before we started dropping the landline,” he says. “It took about 15 years before you could buy a hybrid car on every lot. It takes around 40 years to produce a large shift in the way buildings are constructed. Entire cities? It’s 100, 150 years.”

In the meantime, Joachim is busy producing the stuff that will get us there, whether it’s growing living walls, planting organic lettuce on urban rooftops, or making sure that when your grandkids are ready for their first jetpacks, their cities will be too.