The Future of Green Architecture: The Zero-Emissions Dice House

The Dice House looks like part of a Monopoly set, but the design has real-world ambitions. The 30-by-30-by-30-foot concept home,... 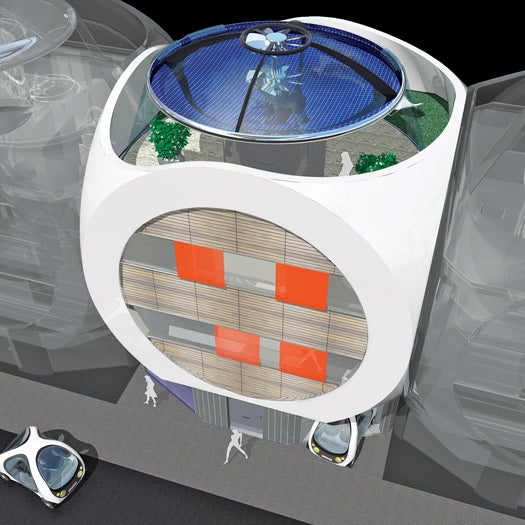 The Dice House looks like part of a Monopoly set, but the design has real-world ambitions. The 30-by-30-by-30-foot concept home, designed by the British architecture firm Sybarite, improves on standard building tech to erase its carbon footprint.

The centerpiece is a photovoltaic umbrella dome that collects roughly 90 percent of the house’s energy needs. Made of a common plastic, the pillowy dome traps heat like a greenhouse. That hot air warms water in a tank tucked under the roof, turning out a daily average of 80 bath-ready gallons, even on the darkest days of December. At the umbrella’s apex, a generator-equipped turbine produces electricity and, in chilly months, drives heat into the house. Photovoltaic cells studding the 484-square-foot dome floor create additional electricity.

Generating an estimated average of 33 kilowatt-hours per day, the house can power itself and charge a Tesla Roadster. And the building, submitted for a carbon-neutral housing competition, manages to stay comfortable year-round without air conditioning. The roof is covered in plants under the dome. Walls made of structural board stabilize temperatures. Windows circumscribed by a big dot—the “one” side of the die—absorb light from the sun-drenched south. And the compact footprint means less space to heat and cool.