Physics nerds and sci-fi geeks just about everywhere agree: lasers are cool. But cool enough to drop the temperature of... 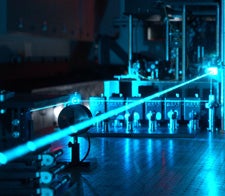 Physics nerds and sci-fi geeks just about everywhere agree: lasers are cool. But cool enough to drop the temperature of a gas by 119 degrees in a matter of seconds? German researchers say so, having made advances on ideas reaching back 30 years but never successfully executed. Bombarding high-pressure gas with a laser, the scientists were able to create a significant cooling effect, shaving the aforementioned 119 degrees from the gas almost instantly by pushing electrons into higher orbit.

Manipulating the paths of electrons is no small task, but the researchers were able to drastically simplify the process by using high pressure gas. The pressure makes the electrons act erratically as atoms collide with one another, slightly bending their paths. Once off their normal paths, electrons can be pushed into higher orbit with far less energy than would be needed at low pressure. As collisions subside, the electrons try to go back to their usual paths, albeit at their new higher orbits. In order to remain in that higher orbit, they must absorb energy around them, and that process slows the gas particles tremendously, causing a rapid, precipitous drop in temperature.

Aside from the earth-shattering ramifications this breakthrough will have on collegiate keggers, the technology could have various commercial applications. Previous methods of rapid refrigeration have been used to produce shinier chocolate and more pristine vodkas. Meanwhile, materials researchers have coaxed some interesting properties from rapidly cooled materials in the past. Refrigeration at such dramatic speeds can produce “supercooled” gasses that remain gaseous at temperatures at which they would usually become liquid (water has been pushed to -44 degrees in its liquid state), and scientists think more rapid methods like as laser cooling could unlock more secrets of the natural world.

For the rest of us, there’s the chocolate and vodka, and that ain’t so bad.