From its humble beginnings in a ski beenie three years ago, the elastic polymer that stiffens immediately on impact has exploded 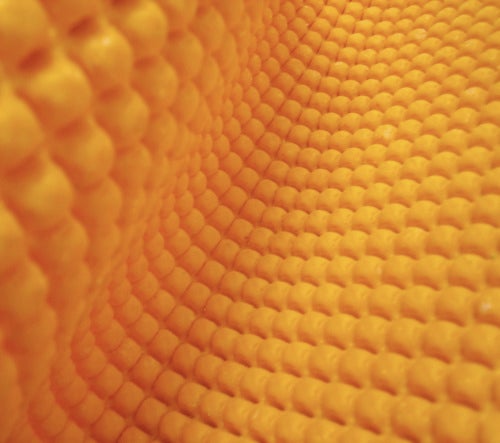 Here at PopSci, we love when our leading-edge reporting on the seemingly unbelievable, futuristic developments in science and tech end up, well, becoming reality. We reported three and a half years ago on d3o, the elastic polymer that’s flexible at rest but stiffens instantly in response to an impact, first found in a soft winter beanie that protects like a helmet. Now, it can be found in 107 products made by 22 different companies, ranging from iPod cases to polo kneepads.

d3o was first introduced during the 2006 Winter Olympics in Turin, giving downhill skiers’ millimeter-thin aerodynamic bodysuits a thin, flexible layer of protection. The protection comes d3o’s ability to stiffens on impact as the molecules lock together–the harder the hit, the tighter the lock, with the molecules instantaneously return to their original state after impact.

The best demonstration is playing with a wad of the raw orange material. In your hands the substance feels like something between Jell-O and Play-Doh. Pliable, moldable, rollable. You can rip off a chunk and then slap it back to itself. Touch it and your finger can go right through it. But roll it into a ball throw it down on the ground and the sucker behaves like the 25-cent bouncy balls your kid bought at the toy store.

With its most commercially successful product launched earlier this year (in a Head tennis raquet) and a contract with Britain’s Ministry of Defence sparking its entry into the military arena, d3o is certainly for real. We spoke with CEO Richard Palmer to figure what’s next for the magic material and the 15 person company protecting people everywhere from themselves.

BZ: Has the sheer number of applications for d3o surprised you?
RP: Overall I am amazed at the variety. I’m also still amazed at the quantities that continue to come in that we hadn’t previously considered. When I first wrote a business plan it was like we we’re going to conquer the world with this entire list of industries where I saw the technology being useful. But there’s a whole other world of products that I just never considered.
See our gallery of some of the more diverse applications of d3o here

**Do you worry about over-exposure?
**Obviously, there’s a balancing act. We would worry if the quality of those products was poor. But we maintain that there’s a lot of applications for a soft shock-absorbing material. If you position yourself exclusively within one market, so for example you’re a footwear technology, then as soon as you start to move into headwear, the consumer gets confused or even concerned as to how a footwear technology is supposed to work in the head. So if NIKE Air came out with NIKE air helmets how would the consumer react to that? By spreading across a wide range of applications it allows us to send a broad but consistent message that’s it’s all about shock absorption and protection, and that anyone who wants the best should look at d3o.

Are there limitations from a technical perspective? Are their things you can’t protect with d3o?
There’s a lot of technical challenges with the production process. There are many future manufacturing procedures that could open us up to products we can’t’ currently make. For example we can’t make sheets that are very large. That limits us.

Will the material itself evolve at all?
There is a range of polymers that we can use in the future to provide other areas of performance. For example we are not abrasion resistant right now and we are not staph (bacteria) resistant. Those are some of the areas where the future is looking pretty attractive.

**How many projects are normally on your plate?
**There will always be the small ones that are quick to resolve. For example we have someone in the petrochemical industry who wants some gloves. So, we’ll decide how we want to test the existing gloves, put in a piece of d3o, retest and send that back and decide how to progress. Other projects are much more extensive. We’ve won a development project with the Ministry of Defense to develop a helmet liner for a military helmet. That’s a whole program of development where it has to be washable, provide the right chemical resistance, provide the right protection combined with flexibility, combined with cost. That could be twelve months of activity. At any one time we’re probably dealing with 20-30 total projects and probably five big ones.

Do you have a formulaic way of deciding yes or no?
What we aim for is what I call the ‘three m’s’ of a technology adoption. First, whatever you’re saying should be measurable. If it’s not measurable than how can you say it exists? Secondly, that measurement should be meaningful. It should make a difference that the consumer actually wants. Third, it has to be marketable. So somehow we have to be able to communicate effectively the benefit that exists on the product. And once you have those three, then you have a story.

We love data as much as the next nerd but the Head tennis racket merely claims “softer touch and better feel” without anything numerical. We asked for data and they refused. We attempted to get hard measurable data and they wouldn’t offer it. What’s up with that?
As I understand they have a test facility and they want those procedures and methods to remain secret. I think that would be a problem if we wanted to further advance the vibration attenuation of a racket, but it’s not really core to our business. In the past we’ve done some work with ballistic tests and we had one company show us some fantastic results but wouldn’t tell us how they achieved them. So in certain areas we won’t start without an agreement that we’ll share the development data. But if someone wants to put it in a lacrosse stick, I’d be interested in the data, but I wouldn’t be upset if for commercial reasons they decided not to share.

**Any particularly technically challenging products that you’re proud of?
**
I think the limited edition Puma football we did. It was deliberately limited edition because we couldn’t make large sheets. And the challenge in manufacturing that that product was outside of our knowledge when we started. The way it’s’ constructed and the thinness of d30 that we needed to get to was a real production challenge. It was a great result but in practice it was a lot of work to make it functional.

What’s the next frontier?
We understand blunt trauma in terms of receiving a blow to the body or how we might participate in a hard shell helmet for the military. But we don’t really understand our benefits in ballistic and blast protection. We’re hoping we can secure a contract to research that. We found that our material seems to work better and better the faster you try to move it. So once you get to ballistic type speeds you might be gaining a greater benefit that even with blunt trauma. 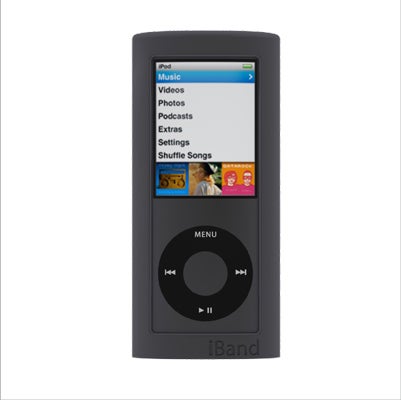 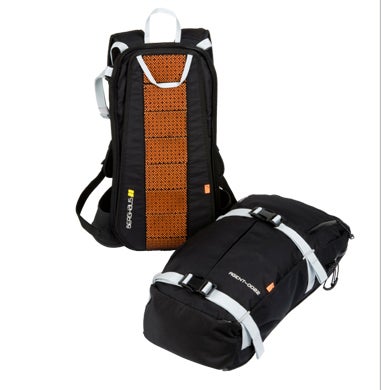 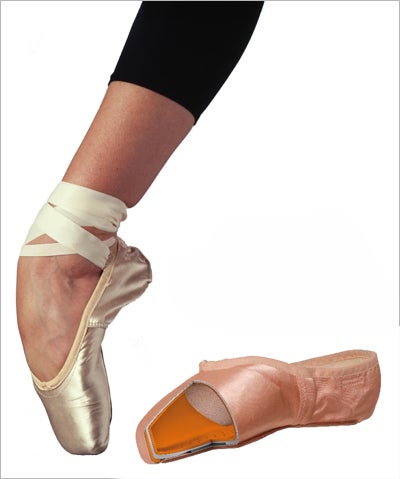 Capulet’s Juliet d3o, which we previously covered, breathes new life into the ballet shoe, the basic design of which hasn’t changed for three centuries. The d3o material in the toe and midsole gives the necessary stiffness for pointe dancers while retaining flexibility. 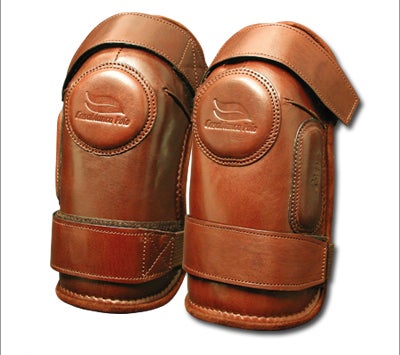 Casablanca Polo’s reinforced knee pads keep it traditional with leather on the outside, but the d3o inside protects without bulk. 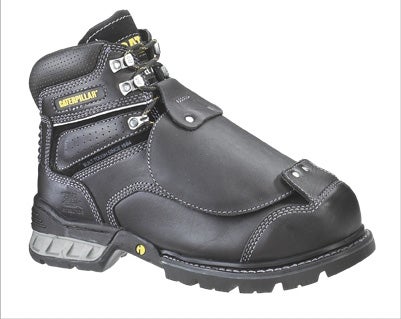 The metatarsal guard on these Cat boots can flex with the foot’s natural movement, but still protects when a cinderblock falls on your foot. 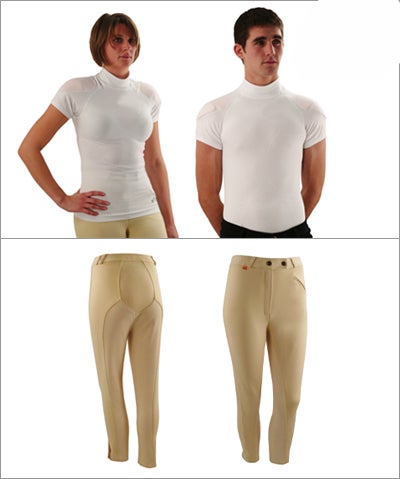 Super-thin d3o padding reinforces the shoulders of these competition shirts, and the tailbone and lower back in the breeches. 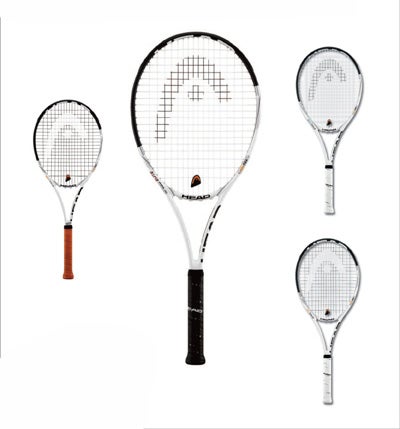 Super-thin d3o padding reinforces the shoulders of these competition shirts, and the tailbone and lower back in the breeches.
chemistry
Sports