Nanotechnology, lasers, genetics, and cancer? If there was also something about space, this story might have been a PopSci full... 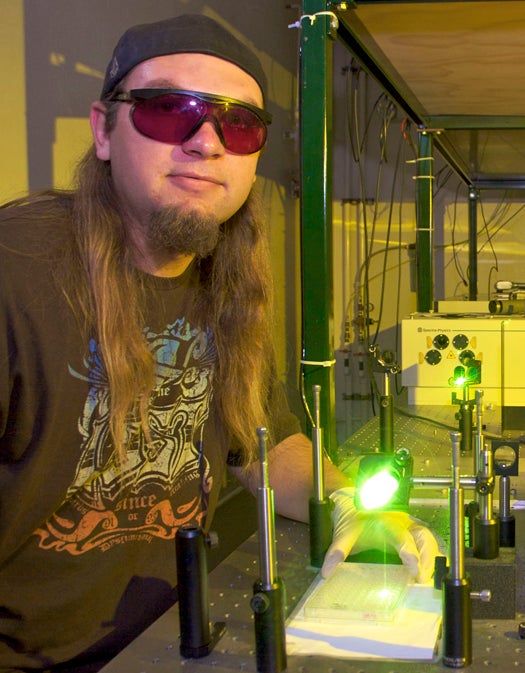 Nanotechnology, lasers, genetics, and cancer? If there was also something about space, this story might have been a PopSci full house. Scientists at the University of California, Santa Barbara (UCSB), have figured out a way to deliver cancer-stopping RNA directly into the nucleus of a diseased cell. To get into the nucleus, the RNA is wrapped in special gold nanoshells which are then selectively opened by a laser.

The UCSB scientists performed the experiment on cultured cancerous mouse cells. The cells took up the gold-wrapped RNA, which was then activated by the non-harmful laser. The RNA in the capsule was specially designed to silence the genes responsible for dividing the cancerous cells. With the division stopped, the cancer culture couldn’t spread, and would eventually die off.

By using a laser to activate the RNA, this technique allows for ultra-precise dosing and drug targeting. A whole group of cells can be giving the gold-coated drug, but with the laser, a doctor could ensure that only specially targeted cells actually receive the RNA.

This technique is still in the early stages, and the UCSB scientists freely admit that they don’t currently have a plan for expanding this method to larger targets like tissue samples or whole organisms. However, the major technical hurdle was the design of the gold nanocapsule, not the laser, so once they figure out how to utilize this technique on a larger scale, it could expand to include many other kinds of drugs.