Baratunde Thurston: Correspondent of the Future 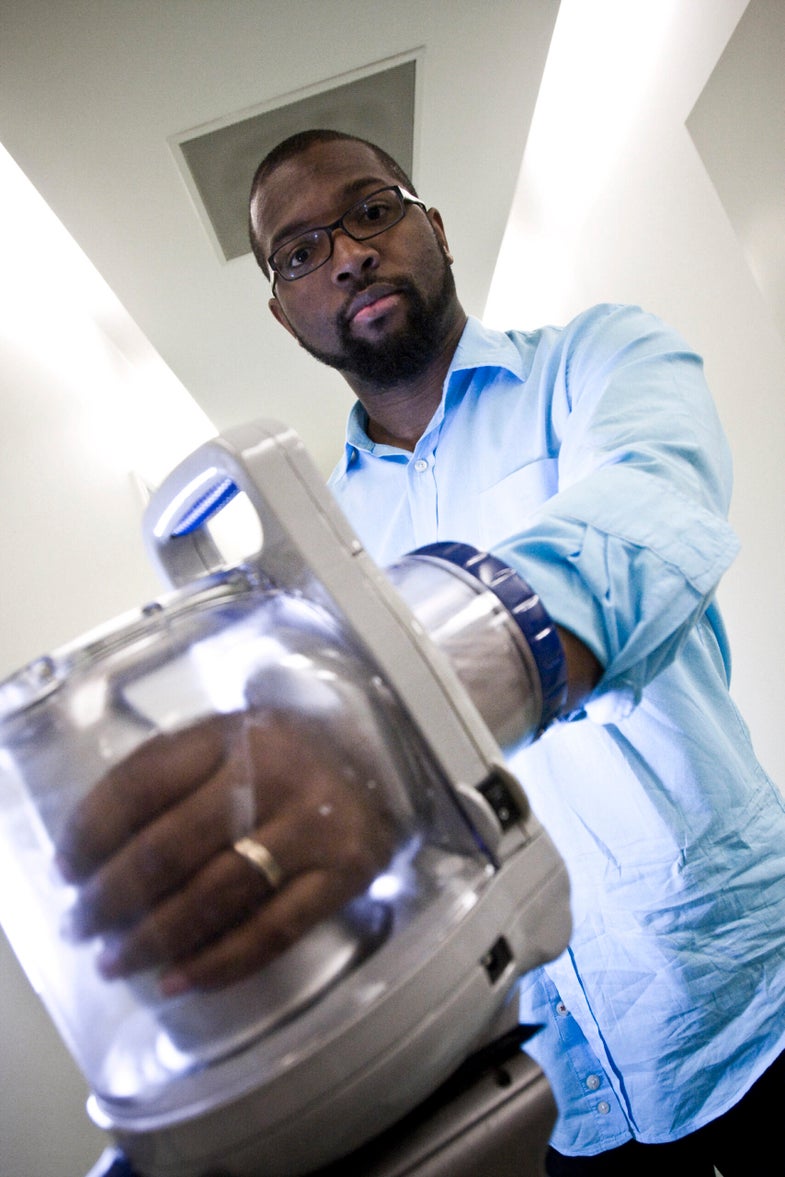 6/11/09 -- Palo Alto, California, USA -- The host of Pop Sci's Future of ... Baratunde Thurston is photographed on the set using the the Cool Glove during taping on the Stanford University campus on June 11, 2009. -- Photo by Martin Klimek/Getty Images. Martin Klimek
SHARE

Baratunde Thurston delves into technological and scientific innovations in the new television series Popular Science’s Future Of, premiering on the Science Channel Monday, August 10 at 9 p.m. (ET/PT). As a comedian, political pundit, and author, he guides us through the future of play, war, sex, security, and many other topics affecting human life. In Monday’s premiere episode, he will go to the MIT Media Lab to try out new technology that will shape our leisure time in the future.

PopSci talked to the man about television, the future, and defeating Michael Phelps.

You’re a man of many talents and a long resume. Why did this host job jump out at you?

Because I got to be smart and funny at the same time. There’s a lot of work available in show biz that doesn’t interest me because it’s stupid. You get to look pretty and you might get to reach a lot of people, but you don’t get to say anything interesting. And this is really, really interesting. Most of my TV exposure before this had been in the overlap of politics with some comedy. But now I get to be a geek too? That’s kind of perfect. Also I really like the future. And in a way I’m kind of a correspondent across time, and I get to travel to the future and report back what I’ve seen. The idea that I get to experience a lot of these concepts — drive the tank, swim with the dolphin fin — as opposed to just talking about it makes it a lot more interesting.

What’s it been like filming Popular Science’s Future Of?

It’s blurry. It really is. I don’t think I’ve taken the same airline twice. I have gotten to see some really cool towns and it’s been a hectic, exciting schedule. Everything is a little bit different. A lot of my work before this show revolved around the future of communications. This is like that life on steroids. Multiple times a week my mind is shifting from food, science and the preservation of food to aquatic propulsion, to biologic mimicry and genetic analysis. It’s like my brain is on fire. My brain actually hurts. Sometimes I feel like I can’t absorb any more information and make it make sense. But that level of spontaneous engagement is very, very cool. Exploring all these topics has been hectic but fun.

What have been the worst aspects of filming? Anything gross you out?

I had to shove a tube up my nose for this technology called “cool glove.” It’s a vacuum seal around your hand that allows you to lower your body temperature really quickly. It’s mainly for athletes. It let’s you keep going without taking steroids. Apparently our technology is not significantly advanced enough that I don’t have to shove a tube up my nose to take my temperature. But they insisted it was necessary. For science — for the people — I did this.

How has your background in technology, politics, and comedy helped you with this very scientific show?

It’s weird because in many ways I have this Winnie-the-Pooh background, so I have my hand in many different honey pots. Specifically, the structure of the show is me interviewing people who are not necessarily media people. Many are very academic researchers who are good at science but not television. My background in standup comedy helps a lot. Standup is like the roughest public act you can do, and I’ve had every type of crowd, including very negative crowds. But this helps put the scientists at ease before we get to the meat of the science. If you make somebody laugh, you open them up. It’s about making them laugh before we get to business.

I’ve been taking apart gadgets since I was a very, very small person. I hack things all the time. I don’t even have cable. I jailbroke and unlocked my iPhone. I have this genuine enthusiasm and it is necessary to care. I’m not faking it — I’m actually interested. A lot of journalists or hosts can’t say that — that they actually care about the material. It’s hard to substitute acting for that.

What kind of preparations do you take for each of the shows?

I get a quick master’s or Ph.D, then publish a few papers, get some prizes, speak at some conferences. Yeah, I’m really committed to the job.

Actually, Incubator is the production company for the show. They’ve done a really good amount of background research on most of the people or technology, so I start with what they have. But then I go beyond that and check out Wikipedia and other press mentions, or Youtube for existing videos, and see what the tech actually looks like. I also have a pretty decent-sized social network community through Facebook and Twitter, so I’ll toss out questions to my followers, who are really smart people. The ability to tap into a smart network and supplement my own knowledge quickly so I can elevate and have a real conversation with these people is priceless. There’s no way I can know all the good questions. That’s what helps me sound smart.

Do you ever feel amazed at some of the scientific breakthroughs being predicted? What has been the most fascinating?

In Seattle, during both of the trips there the people just blew me away. There’s a lot of stuff from the future that’s fun or impressive, but there’s a guy there who could legitimately revolutionize everything. I don’t use those words lightly. He’s taking a cross-disciplinary approach combining genetic analysis, protein blood analysis, statistics, mathematics, and computer science. This will allow us to predict your medical outcome, and help you not get a disease in the first place. It takes really little money and really little time. That was the day that my head hurt. It was too much science for one man to take. He’s the heaviest-hitting mind I’ve encountered, and I’ve dealt with a lot of smart people.

What has been your favorite episode to film so far?

In Athens, Georgia, I tried out a fin. The scientist was interested in aquatic propulsion and spent time in the aquarium to watch the fastest-moving fish, and noticed the same crescent-moon shapes. He made a model, looked at physics and looked at how the angle of attack is maintained regardless of direction. You can buy one for $1,000 and it will make you swim 8 miles an hour. Michael Phelps swims about 3 miles an hour.

It’s all about how we’re going to experience adventure in the future. This could change the whole landscape for adventure. This was fun because I got to do it. It’s one of the few pieces from the future that I could really, really feel. Like I was wet. The future is wet. I got really wet and swam really fast. My first day, I kicked Michael Phelps’s butt. That’s not bad. That’s a great future.

Tune in to Popular Science’s Future Of this Monday at 9, and till then follow Baratunde at Twitter.com/futureof.