What do whales sing about? 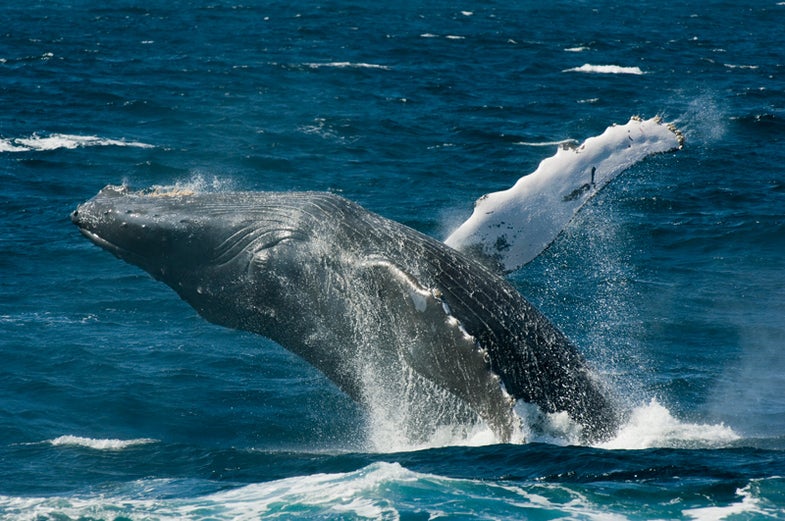 Humpback whales sing some of the most beautiful songs in the animal world. It’s not just “woo, woo, woo”—their songs last 10 to 15 minutes and have a definite form, usually consisting of five or six unique phrases. Only the males sing, which has led many scientists to theorize that they croon to attract females. The hole in this argument, though, is that no one has ever seen a female whale show any interest in a male’s song.

Although male songbirds change their tunes to impress potential mates, a group of male humpbacks all sing the same song. If the song changes midseason, they all adopt the same change. We don’t really know why they do this. They might be trying to create a sense of peace before they mate, or they could be staking out their territory. Either way, it makes the competitive-mating theory seem less believable.

We’re also not quite sure why they change their songs at all. It could be that one whale tweaks part of the song and, if it’s catchy, the rest pick it up quickly. I gave this a shot by playing my clarinet to a whale swimming under my boat, and he seemed to change his song in response.

Another theory is that whales’ brains are programmed to change the tunes. For example, scientists have recorded humpbacks in Hawaii and the Gulf of Mexico altering their songs in similar ways at the same point in the mating season, even though there’s no way the groups could be hearing each other’s songs.

Most of the research money goes to studying whale songs for conservation efforts (each whale has a unique voice, so it’s a good way of estimating how many are out there), not translating their meaning. But this much seems clear: If it takes 15 minutes to sing it, the message probably isn’t too urgent.

David Rothenberg is a professor of philosophy and music at the New Jersey Institute of Technology and analyzes whale songs in his new book, Thousand Mile Song.