Inside the Tsunami Factory

What causes a monster wave? Scientists are drilling seismic hot zones to find out

Over the past 1,300 years, the Nankai Trough, the 500-mile-long boundary between two tectonic plates off the southwestern coast of Japan, has been one of the world’s most active tsunami hotspots. Now an international team of scientists has embarked on a multiyear project to drill four miles down into the heart of this subterranean wave machine. The Nankai Trough Seismogenic Zone Experiment, called Nantroseize, will be the first attempt to penetrate a tsunami-generating hotspot and could help scientists understand the source of the huge swells. “We can monitor the ocean all we want, but we’ll never understand why some earthquakes produce tsunamis and why others do not until we understand how faults work,” says geophysicist Nathan Bangs of the University of Texas. 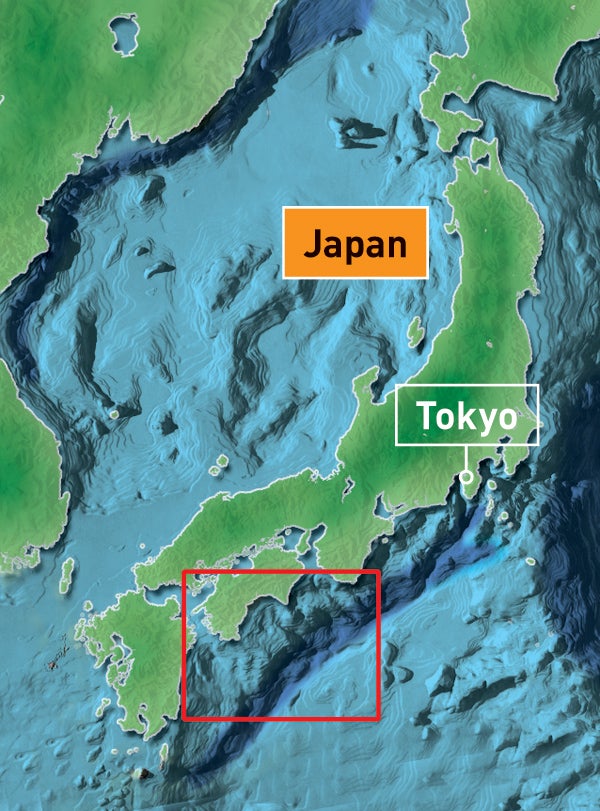 Researchers hope to explain why a part of the seafloor off the coast of Japan known as the Nankai Trough creates so many killer tsunamis.

Last year, prior to drilling, researchers aboard the Chikyu, a Japanese science vessel, captured 3-D seismic images of the fault zone where one plate slips beneath the other. The images helped the scientists pick the best spots to drill, but they also revealed new, steeper faults in the rock. Bangs says these near-vertical faults could explain why the Nankai Trough produces roughly one monster earthquake (8+ on the Richter scale) every 150 years.

More answers should come in the next four years, as researchers drop a drill down to the ocean floor and send it churning into as much as 20,000 feet of rock. By dropping seismometers and other instruments into the holes, they will be able to monitor the fault zone in real time. Although most scientists doubt that they will ever truly be able to predict tsunamis, the information could help identify other potential tsunami hotspots around the globe.

How Waves Form The Nankai Trough is a subduction zone—a spot at which one tectonic plate slides beneath another. Sometimes the two plates get stuck and build up friction, which eventually causes the overriding plate to snap. The force jolts the seafloor, causing the ocean surface to jump or drop. The result: Huge waves flow outward in all directions.

Tracking Faults Typically, a major earthquake originates miles below the earth’s surface, and the energy released moves up through the fault. When the fault is more horizontal, the energy dissipates as it travels up through softer rock. But recent 3-D seismic imaging of the boundary between the two plates in the Nankai Trough reveals new, more-
vertical fractures that branch from the main fault. These steeper splits give seismic waves a shorter path to the seafloor and may produce a larger displacement of water.

The Drill The Chikyu lowers a 20-inch-wide, 1,000-foot-tall segmented pipe over the target fault. The ship then drops a 12-inch-wide drill bit down through the pipe and pumps drilling fluid along with it. As the drill churns up rock, the fluid carries the debris back to the surface between the inner pipe and its outer casing.

Rock Science Drill sensors gather data on the temperature and pressure of the rocks. The drill also retrieves rock samples. In the deeper holes, which could reach as far as 30,000 feet below the seafloor, the scientists will study rocks that have been shifting downward for millions of years and analyze them for quake-specific traits. For instance, excess water in the rocks may portend slippage, since it may lubricate the fault zone.

Listening By 2012, instruments at the bottom of the holes will listen for the first rumblings of a quake. The data will either be routed through a fiber-optic cable running from the top of the borehole to the shore, or it will be stored at the top and then retrieved and delivered to the ship by submersible.