We tackle the answer to the age-old question 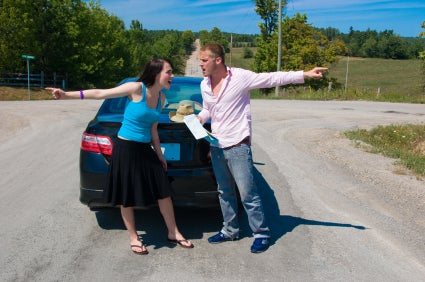 A young couple at a crossroad argue on which way to go. Rohit Seth
SHARE

He says go straight for three miles and turn east. She says drive past the school and turn right at the green house. Both sets of directions will get you to the same grocery store just as easily, but they embody the language barrier between the sexes that lurks behind many a front-seat argument.

Deborah Saucier, a professor of neuroscience at the University of Lethbridge in Canada, examined the differences in phrasing in her 2003 study. She observed that, after studying a map and being asked how to get to various locations, women typically give directions that feature landmarks and left and right turns. Men, on the other hand, employ compass directions and distances measured in minutes or miles.

Some animals, such as homing pigeons, have extra iron in their nose that helps them turn toward the magnetic north pole. But men’s internal maps, Saucier theorizes, most likely date back to our hunting ancestors. During a hunt, men would stray far from home and into unfamiliar territory to bring down wild animals. They may have relied on tracking the position of the sun and their innate orientation skills to find the most direct route home.

Meanwhile, prehistoric women, who gathered more-sedentary food, probably found their way to and from the most bountiful and nutritious plants with the help of landmarks. In a study last year at the University of California at Santa Barbara, evolutionary psychologist Joshua New tested this theory in a farmers’ market. After a single tasting tour of the market, women could more accurately point to food stalls they had visited, noting, in particular, the locations of foods with high energy content. With the benefit of food stalls as landmarks, women knew their way around better than men.

To compensate for the gender differences, Saucier suggests giving disoriented people both male- and female-oriented instructions. “People get a lot less lost that way,” she says.

Ask Us Anything
gender